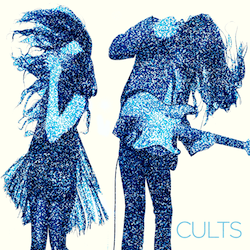 How does one assess the merits of the breakup album? By their mere presence, the declaration of their intent, long-form concepts about private discord present levels the listener can’t ever completely access. Sometimes they’re plainspoken enough to strike a universal chord (Fleetwood Mac’s Rumours), cold enough to convey the emotional starkness (Beck’s Sea Change), or weird enough to show how comprehensively fucked up the whole charade is (Marvin Gaye’s Here, My Dear). But there’s always a point where we just don’t know.

The second album from Brooklyn duo Cults takes its name from the most likely side effect of any romantic bust-up: the absolute lack of clarity that inevitably follows a big decision, the rattling confusion that emits between a phase of settlement in search of the next one. Madeline Follin and Brian Oblivion, whose romantic partnership fizzled as they decided to continue together professionally, had one more talking point to get around with the making of Static: the trademarked sound of their excellent 2011 self-titled debut. Fairly or otherwise, Static exists with that aesthetic expectation – Follin’s eternally young girl-group melodies dwelling within a reverberant, yet clear echo chamber.

It’s perhaps appropriate, then, that Static’s overall effect is a little muddy. Where the debut thrived on its crispness, Static introduces a lot of elements that tend to drown each other out. “I Can Hardly Make You Mine” pushes along with a straight-four Motown drum beat and a killer acoustic piano bass note, but Oblivion’s guitars and spooked-out organ, not to mention their scratchy overtones, seem to fight each other for dominance. The same overload defines “Keep Your Head Up” and the closing “No Hope,” which is filtered through literal static.

But Follin’s vocals — stylistically detached, but not without their haunts — stand out just enough from the rest of the morass to give Static whatever effectiveness it has as a mentholated mood piece. “Always Forever” finds her being as plainly desperate as she’s allowed to be, sending out dry appeals (“You know you’ve got me in your pocket”) across a canyon-sized chorus that recalls Kim Deal’s howls in the Pixies’ “Where Is My Mind.” In “We’ve Got It,” maybe the most realized track on the album, Follin squares faultlessly with Oblivion’s moveable feast of cinematic drama: part Bacharach, part Frankie Laine, and part Steve Nieve’s organ from This Year’s Model.

As gifted as Cults are with the palettes of epic ennui and good song construction, Static does raise the question of whether Follin and Oblivion occasionally mistake atmosphere for mood. But if they tried to make the album more intimate, if they put more of what they were going through out front in an unambiguous way, would they have sacrificed the gifts that made “Abducted” such a classic? More to the point, would we believe them?

At just over a half-hour, Static isn’t a waste of anyone’s time, and reveals all the compositional promise of Cults’ debut. But more often it feels like they’ve expanded their sound vertically, when the emotional reality of their situation might have called for some survey of the wider horizon. Then again, maybe it was too tough and too soon to take the blinders off.