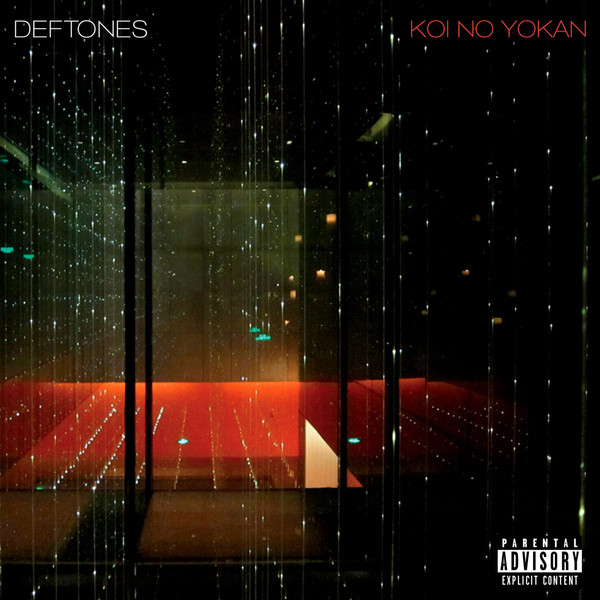 For better or for worse, Sacramento’s Deftones have long been associated with nü-metal, despite sharing few common characteristics with its major players. Once upon a time, vocalist Chino Moreno appeared on records by Korn and Sevendust, and the band’s early single “7 Words” definitely contained the requisite hyper-aggression of metal’s late ’90s muscle, but the band’s near-avoidance of cliché rap-rock tendencies and pursuit of subtler dynamics always set them apart from the bands that perhaps weren’t destined to age well. Sure, they’ve always been loud, dense, even aggressive, but always counterbalanced by an embrace of quiet and a pervading sensitivity that occasionally pushed them into the realm of shoegaze or emocore, which, in their hands, was a positive development. Through interviews and a long list of cover versions, the Deftones have made perfectly clear that post-punk bands like The Smiths and The Cure are some of their biggest influences, and if anything, that’s only grown more pronounced over time.

Having kept up this tricky balance between ethereality and heaviness since 1997’s Around the Fur and perfecting the ratio on 2000’s White Pony, Deftones have reached another new landmark with Koi No Yokan. The band’s seventh album, Koi is as much an affirmation of the band’s strengths over the years as it is a testament to how far they’ve traveled. And given the detours and setbacks that have befallen them over the past five years, this is no small victory. Bassist Chi Cheng was injured in a car accident in 2008, leaving him in a minimally conscious state. This put the band in the position to question whether their end date had arrived, ultimately deciding it hadn’t, and Quicksand’s Sergio Vega stepped in on 2010’s Diamond Eyes, representing a new beginning of sorts. With Vega now more or less a permanent member of the band, Deftones sound stronger and more confident than they have in more than a decade.

It would be a bit of a misnomer to describe Koi No Yokan strictly as a metal album, as its dreamy textures and almost total absence of screaming on the part of Moreno makes it almost like a supremely heavy shoegaze album, though that doesn’t seem quite right either. That’s part of what makes this chapter of Deftones’ progression so exciting. They’ve never been easy to pin down, but this time their defiance of expectations comes with a batch of some of their best songs to date, wrapped up in a haunting, melody-heavy approach. Stephen Carpenter’s riffs certainly throb and throttle opening track “Swerve City,” but it’s the juxtaposition of Moreno’s effects-laden vocals against dense sheets of guitar that ultimately turn it into something sublime. Similarly, when Moreno’s vocal cords shred on “Romantic Dreams,” he sounds anguished rather than menacing or manic, nicely complementing the minor key cinematics at play.

The jerky, strained riffs in “Graphic Nature” threaten to turn into a mosh meltdown, but take a turn into the opposite direction, allowing in more space and subtlety, while “Tempest” provides an illusory juxtaposition of downtuned riffs and hypnotic drone. Perhaps the most surprising moment arrives in the intro to “Rosemary,” however, in which Carpenter’s guitars sound more like those of Emeralds’ Mark McGuire than Max Cavalera. It’s here where the divergence between Deftones’ sound and that of a nü-metal band becomes more concrete — where a young Deftones may have intended to impose force on the listener, they quickly realized their strength was in crafting something immersive. Koi No Yokan, for as heavy as it comes across, is a fluid and sensory experience rather than an adversarial one.

Atlas Moth – An Ache for the Distance