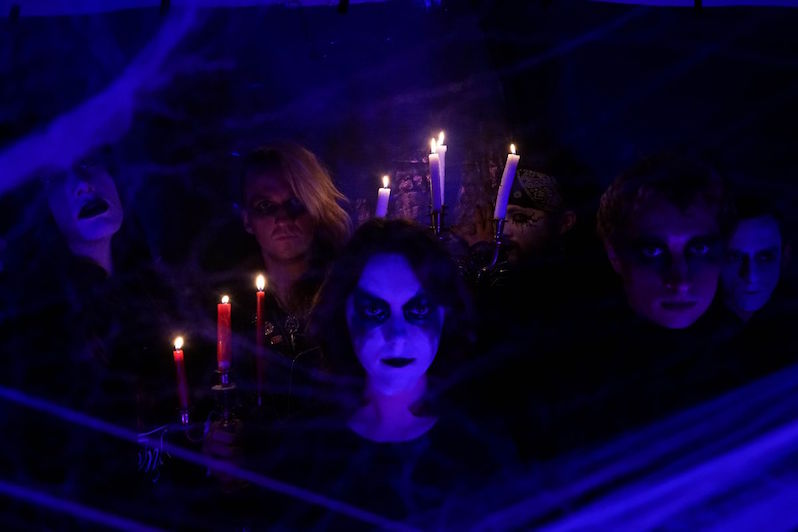 On first glance, it’s easy to get wrapped up in the theatrics of Philadelphia metal band Devil Master. The Satanic imagery, the goth-rock flourishes, the album art that nods to Japanese surrealist horror film Hausu and, of course, the haunted-house attraction press photos that accompanied the release of their full-length debut, Satan Spits on Children of Light. If the band’s aim is to put on a show, they’re doing a damn good job of it.

They’re also, however, making some of the most vital metal today, which is only slightly complicated by the fact that the band’s six members—Disembody, Spirit Mirror, Hades Apparition, Dodder, Darkest Prince and Del—all come from more of a hardcore punk background. Punk, as well as post-punk and death rock, are essential to the group’s witches’ brew. Many of them also practice magic, which makes for an unusual collective résumé for a metal band, particularly one that pulls off the rare feat of sounding like they could play a goth club one night, a metal fest the next and a pretty wild, beer-crushing house party on the weekend. And based on the 13 blazing tracks on their Relapse-released new album, no doubt they’d find a way to combine metal with the mystical and the hedonistic in any venue that’ll invite them in for a dark ritual.

In a phone call from his Philadelphia home, the band’s guitarist Hades Apparition says that freedom from narrow definitions is one of the things that makes Devil Master stronger as a band. “One of the things that’s allowed us to really progress as a band is that sense of freedom and creativity that allows,” he says. “Creating without hindrances is really fantastic.”

Ahead of the release of Satan Spits on Children of Light, we had a discussion with Hades Apparition about their diverse influences, having fun with horror, and Satan.

Treble: There are a lot of different sounds swirling around on Satan Spits on Children of Light. Are your collective musical interests pretty diverse?

Hades Apparition: Yeah, absolutely, I think that’s what really sets us apart as a band. We’re not pandering to any specific crowd. We as musicians and fans of music and have so many interests that branch off in many directions, and I think we kind of wear that on our sleeves when we write new songs and new albums. We’re generally fans of punk and metal, but we have very diverse backgrounds and influences, and we really show that when we create new stuff.

Treble: I read an interview with the band recently where you said that “nothing is true” in regards to the band’s music. Does that perspective suggest that Devil Master could change into something different in the future?

HA: I guess in a less literal sense, but I think that at this point as a band we’ve created a sound for ourselves and we know what we sound like. But that doesn’t mean we’re not interested in different avenues and changing. Not to betray what we’ve done. We’re not going to become a slow rock band or anything. But as a band there’s this general idea that “oh you can’t do this, it’s forbidden,” or “you can’t use this influence when you’re making a certain kind of music.” We just don’t believe in that. It really does a disservice to yourself as a musician and fan of music to pigeonhole what a band should sound like. So we’ve always had this mentality going into things where, when we write and we’re creating something new, if it works we’re going to do it.

Treble: Several members of the band are practicioners of magic. How does that translate into the music you make?

HA: Oh, you know, I think with something like that—the idea of ritual and magic practice and stuff, the sense of empowerment that comes from that and the ideas that come from what our members have —essentially the paths that they tread have an influence on the band in the freedom of it. And it’s hard to say, really, but all of us do have a belief in these things, and that has influenced us in a positive way when it comes to the band. We have particular members who are straightforward practicioners of magic throughout their lives. And it shows in the music from the sense of freedom and the sound we try to achieve.

Treble: There’s darkness to what you do, and there are elements of horror, but it’s still a lot of fun to listen to.

HA: Absolutely. There’s the gloom and doom, you know, that has permeated and has a home in extreme music. It’s understandable—that’s what this music is and what it’s for. But we come from a DIY punk background, so we have a lot of influence from punk and metal and thrash. So obviously all those bands didn’t have the same aesthetic and weren’t all saying the same thing. The general influence of all those things culminating did change the sound. The band is something that’s meant to be interpreted different by everybody. So if it’s something that’s more fun, so to speak, to some and darker to others, that’s absolutely the idea we had in mind when creating this.

Treble: Is there something in particular that you’d want someone to take from hearing Devil Master?

HA: Above all else, I really appreciate the sense of triumph that we try to achieve with our sound. That’s something we really like as musicians and have been pushing forward with our sound. The sense of self empowerment of it, the triumph of it, and the freedom, I guess, of Satan. (laughs)