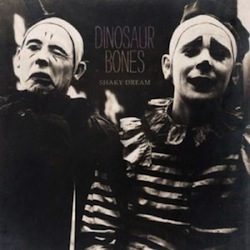 It wasn’t that long ago — say, about ten to 12 years ago — when the lion’s share of melodic alternative bands with dramatic singers warranted comparisons to Radiohead. When Radiohead veered toward the radio friendly, they then yielded comparisons to Coldplay. When Coldplay’s ambitions matched the size of the stadiums they played, they were compared to Muse, and so on. Toronto-by-way-of-Montreal five-piece Dinosaur Bones missed out on this Yorke-ian Renaissance, but reclaim the spirit of millennial British pop without taking too many risks on their sophomore release, Shaky Dream.

Opening number “Dreamer’s Song” best typifies the resemblance to any of the aforementioned, starting with a steady kick drum under a droning bass, competing with a deceptive time signature as vocalist Ben Fox sings a loose melody over the music. The instruments heighten in dynamics, but never too far or too wide, and that’s where the similarity ends. Dinosaur Bones doesn’t quite have the cojones to make their sound soar. “Spins in Circles” picks up what the first song put down, with an even beat and an atypical chord structure. The parts build and build but never let go, feeling more like studio magic than true inspiration. “Nothing Left Between the Lines” features some deliberately booming drum sounds, foreshadowing some welcome craziness, but when the rest of the music joins in, it feels restrained.

Fox & Co. flex a little more pop muscle on a track like “Sleepsick,” sounding at times a little more like an evolved Weezer. This is where Dinosaur Bones shine the brightest: applying their creative melodies and guitar parts to the verses and building up to an irresistible chorus. “Career Criminal” successfully combines their own interesting arrangements with nods to their influences without succumbing to being copycats.

Shaky Dream ends with two numbers that hint at interesting things to come for the band. “Pacifist in Camouflage” uses loops to support a subdued delivery by Fox, his performance like no other. While this song never quite goes to eleven, it does feature some experimentation that never feels gratuitous. Finale “End of Life Crisis” provides a similar experience, but with a harder rocking sensibility. When held against their 2011 debut, My Divider, Shaky Dream reveals a great deal of growth and maturity. The songs have more range and wind down more unpredictable paths. Ben Fox is a talented songwriter with a high ceiling, and going forward, Dinosaur Bones would do well to set their sights on breaking windows as well as stereotypes.