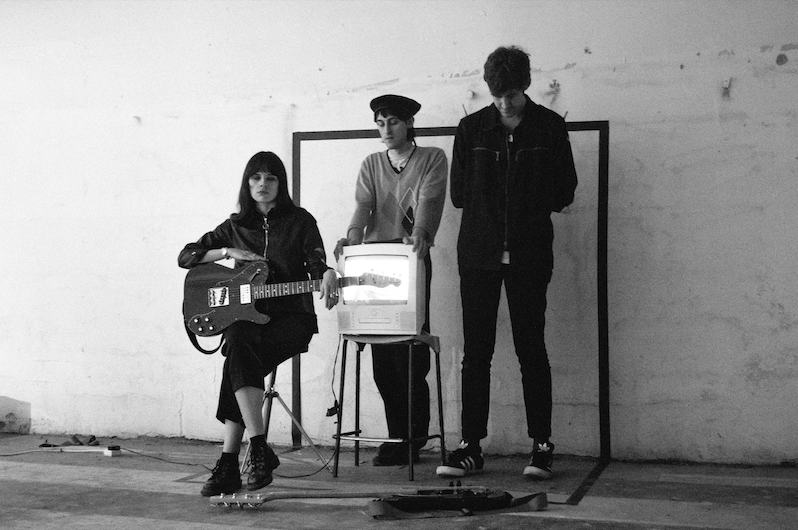 If it’s already been done, then Drahla‘s probably not interested. The UK-based band, formed in Leeds and now based in London, merges the avant garde with the accessible. Their new album Useless Coordinates—released earlier this month via Captured Tracks—is a thrilling outlet for abstract yet immediate expression, blending a classic post-punk aesthetic with new structures and shapes that come together in interesting ways. In a sense, they’re carrying on the tradition of Leeds post-punk as originally founded by artists such as Gang of Four, Au Pairs and Mekons, but they’re carving out their own niche in the process, finding something fun and freeing in dark, asymmetrical creations.

When Treble caught up with the band, they had just taken a break to go swimming. Birds can be heard chirping in the background, and by all accounts it sounds like a beautiful day out as Luciel Brown, Mike Ainsley and Rob Riggs chat about their music and artistic mission. It seems only natural that a band whose very essence is defined by a hunger for creative freedom is basking in the open air.

We spoke to Drahla about their new album, the visual aspect of their music and a desire to move beyond the familiar.

Treble: Was there any specific blueprint for the songs on Useless Coordinates?

Luciel Brown: We were just writing the songs as we were recording, basically, so we didn’t have the album sussed before we went into the recording process. We didn’t have a whole lot of time to write, so we just squeezed it in when we could. We didn’t have an end product in mind, really.

Treble: There are a lot of bands doing a kind of “post-punk” sound, but it seems like Drahla’s approach is a bit different. What draws you to the aesthetics that you incorporate into your music?

LB: I think we’re definitely conscious of doing something different than what our contemporaries are doing—bands who are at the forefront of popularity at the moment. We do get categorized with bands like Idles, who, I dunno, I just feel like we’re doing something different. But I guess everybody says they’re doing that. In England, the popular kind of music is guitar, politics-driven music and we kind of wanted to steer away from that. And we all wanted to create something experimental and that we’re interested in writing. We also just wanted to develop from the previous releases as well.

Treble: There’s a very prominent saxophone presence on the record. Was that deliberate from the beginning?

Mike Ainsley: The first time we put sax on the record was our second single. And we all like jazz and like to listen to the sound of the saxophone. And then when we met Chris [Duffin], it worked so well that he seemed to just get what we were after. We just naturally wanted him to be on there and be a part of it because we love what he does.

LB: Chris can bring something to the songs that we can’t. We played quite a lot of songs with him before, so it was a natural process for him to be more involved.

Treble: Drahla seems to be as much of an outlet for visual art as it is music. How crucial is it to the bigger picture?

LB: Yeah, it’s kind of ironic, we spent more time on the artwork and making the videos than we did writing the album. The amount of time you have to put into that is kind of insane. It’s a massive part of it in that sense. Through the music we have this platform to put our artwork out there and make it part of the music, which is pretty amazing. Just having control over the creative side of it in that sense is really important and something that we all love to do.

Treble: You made a statement when you released the video for “Stimulus for Living” which you said is “challenging standardised format and perception.” Does that idea extend to everything you do?

LB: Yeah, I’d say so. That kind of developed with the interview at the start with the video, we were kind of tired being asked all the same questions over and over again. And there are so many different things to explore. I’m definitely interested in pushing beyond the immediate and delving further and finding the interesting things. A lot of the lyrics are based on observational things that I’ve kind of just seen out and about, or scenarios I’d experience. There was something beyond the immediate that we’re presently in.

Treble: What was the biggest change the band’s undergone since it was founded?

Rob Riggs: Probably us moving to London. At the minute, we like traveling up to Wakefield and practicing for a few days solid. But when we were in Leeds we’d just practice after work. We’re in the middle of seeing how it goes, but that’s probably the biggest change.

LB: We all had to quit our jobs to do the America tour last year.

MA: Yeah, that was a pretty big thing. Quitting the comfort of your day job.

Treble: Is there something in particular that you’d like people to take away from hearing Useless Coordinates?

RR: If it can inspire them to do something creative, that’d be really good.