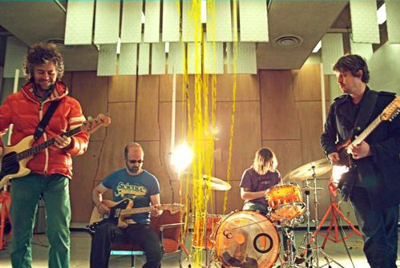 Summer is technically over, though nobody bothered to tell the sun, which is all too generous with its oppressive heat of late. But whether it feels like it or not, fall is here, and it’s time to roundup another handful of notable EP and single releases for the season. While the 7- and 12-inch singles still come and go from time to time, what has stood out most in this transitional period is the pre-album-release teaser EPs that appear to be floating around, one in particular that has made several thousand fans salivate for what’s to come in the next few weeks. So, we’ve got some thoughts on these short-players, and most of them are quite positive.

Whenever the Flaming Lips have a new album set to be released, that album tends to become one of the biggest of that year. Even At War With The Mystics, which by their standards wasn’t all that spectacular, still was a pretty big deal, given that songs like “The W.A.N.D.” and “Yeah Yeah Yeah Song” ended up just about everywhere. But there was something in the air this year, after the Lips announced the release of Embryonic, something to suggest that the album could, just maybe, be some kind of insane, psych-rock masterpiece. Though we haven’t heard the whole thing just yet, the tour EP that the group released in advance of the album is all the evidence one needs to keep believing in the power of this record. First track “Convinced of the Hex” is noisy and weird, with distorted buzzes erupting atop a pulsing krautrock bassline and a super cool Rhodes backing before Wayne Coyne enters with an odd, chanting sing-speak. “The Impulse” is yet another strange specimen, a soft and ambient track with heavy vocoder treatment. The real treat, however, is psych-rock odyssey “Silver Trembling Hands,” a dense, stomping highlight with harp and shrieks and lots of echo. Imagine the Flaming Lips doing Comets on Fire and you’re almost there. This album’s going to be colossal. – Jeff Terich

For a bearded, eccentric hippie type, Devendra Banhart sure knows how to climb the ladder. Having leapt from Young God, to the more high profile indie XL, to Warner Bros., his career has moved along a fairly consistent curve upward, though one could argue that his quality began to drop and his need for editing rose a bit with his last effort, Smokey Rolls Down Thunder Canyon. His latest single, and first track from his forthcoming Warner Bros. debut, “Baby” is a fairly straightforward, ’50s-leaning pop track that seems to reveal the influence that recent collaborator Beck has had on the San Francisco singer-songwriter. The weirdest thing about it, however, is how normal it is. In fact, it’s almost too normal, but that said, it’s not half bad. The promotional EP on which “Baby” appears contains two other tracks from Banhart’s new effort, the rockin’ “16th & Valencia Roxy Music,” which certainly owes a strong debt to its titular influence, and “Goin’ Back,” a breezy folk-pop jam that sounds more like the Banhart of yore than its two companions here, though more than anything, it recalls the work of Vetiver, a band that Banhart has likewise collaborated with in the past. Banhart’s move to Warner Bros. hasn’t necessarily tamed his bearded ways, but the troubadour does sound a bit more focused. It remains to be seen whether that holds true for the remainder of his new album, but for now it’s a promising start. – Jeff Terich

I don’t begrudge The Pains of Being Pure At Heart for their wince-inducing name. I initially wanted to, but the indie pop darlings’ fuzzy and sweet melodies are just too darn likeable for anyone to get caught up in such a trivial aspect of their identity. Following their excellent self-titled album comes this five track EP, another brief set of warm and fuzzy pop from the dream-gazing outfit. “Higher Than the Sun” is an effervescent single, glossy and glorious and extremely difficult not to love, and the same goes for “103,” which is similarly ebullient in its melody, but far heavier on distortion, recalling the sugary fuzz-pop of Velocity Girl. The group goes for a more synth-heavy, gloom-pop sound on “Falling Over,” a track with more than a subtle shade of The Cure, and slows it down just so slightly on “Twins.” Closing out the set is Saint Etienne’s remix of the title track, which gives it a much spacier, ethereal sound, a fine come-down for such an energy-packed set of joyous pop. – Jeff Terich

Despite their debut EP Pastel containing a meager three songs, Still Life Still have been accompanied by a considerable buzz as the most recent signing to the ever-expanding Arts & Crafts label. With production credits to Kevin Drew himself (along with Martin Davis Kinack) and a weighty push from both A&C and Canvas Media, the promise of the band is evident. Opening song “Pastel” is urgent from the very beginning. A variety of layers and textures collide, rapidly building to the repetitive alternating choruses of “We really need to be friends/ I really want to be serious,” which aren’t so much sung as they are an eruption of desperate shouts. The influence of Drew is present with the song having a blatant Broken Social Scene feel, though the well placed synths and vocal screams help establish a differentiation. “80’s on TV” is a mopish track that abandons the frenetic energy of its predecessor and incorporates an endearing sense of nonchalance. It’s a nigh-ballad that manages to arrive at moments of sustained danciness and with faint blips of a turntable, a rare sighting this side of the death of that nü-metal horseshit. Closer “Aid” has the tendency to get dismissed on account of a dragged out intro but once the lyrics arrive they are stifled and distorted a-la-Kevin Drew but progress to the frantic screams previously documented. Though Pastel may be brief to a fault the three songs here are widely diverse and do well to establish a hankering for more from Still Life Still. – Tyler Weir

The New Up – Better Off (Self-released)

From the opening crunch of “Dear Life,” the first track on the new Better Off EP by San Francisco’s The New Up, there’s something distinctly ’90s sounding about the six-piece alt-rock band. Maybe the fact that I’m referring to them as an alt-rock band makes that point even more painfully apparent, but the group clearly has a heavy grunge sound, but made slicker with feminine vocals, electronics and, uh, flute. Now, the group is quite good at what they do, and what they do is pretty fun, but those looking for something new and interesting should look elsewhere. But for those who miss Garbage, this isn’t half bad. – Jeff Terich