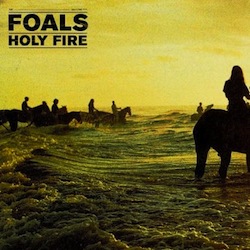 Soaring overtures and stadium ambition are part of Foals’ DNA. The manner in which the UK indie rockers have tapped into their stadium-rock genetic code hasn’t always been consistent. On debut album Antidotes, they couched their most capital-p Pop tendencies with math-rock riffs and snotty post-punk spasms. And on follow-up Total Life Forever, they scaled back to slow-burning, atmospheric pop that lopped off a bit of immediacy in favor of more haunting and conventionally beautiful material. Yet somewhere, awash in disparate aesthetic decisions, were anthems, big ones, and quite spectacular ones at that. In tracks like the subtly building “Olympic Airways” or the epic “Spanish Sahara,” Foals’ larger aspirations shined through, their occasionally experimental sonic approach falling away and revealing something bigger and more universal than they’d ever let on.

Comfortably enough removed from the affected yelps of their debut to reconsider a gradual reincorporation of flash and maximalism, Foals have taken full ownership of their most populist elements and played them up to the fullest, with some credit going to production/mixing team Alan Mouler and Flood, on Warner Bros. debut Holy Fire. Still recognizably the work of the same band that released both the frantic flail of “Cassius” and the more downtempo “2 Trees,” Holy Fire represents a comfortable balancing act for the band. There’s a short-lived, four-minute period, during the cool introductory “Prelude,” in which it appears further abstraction or subduction might be in the group’s plans. But such notions are short lived.

With a dazzling sputter of snare and cymbal, drummer Jack Bevan clears out a path for a powerful, if understated groove on the intoxicating “Inhaler.” Yet for maybe the first time in their career, Foals drop the art-house pretense of their post-rock-punk grooves and let their power chords fly during its loud, cleansing and thoroughly awesome chorus. It’s an old trick, but that the band has kept it in their back pocket all this time speaks to their commitment to avoiding clichés. And in being a band who has for so long subverted the expected, they once again turn those expectations on their head by letting the big riffs fly. Likewise, the more that Foals employ digital delay and deft guitar play, the less they sound like Battles and the closer they come to U2’s the Edge.

Much of Foals’ embrace of bigger pop ideals comes directly from frontman Yannis Philippakis’ lyrical content. Where the band’s songs have shifted the focus from random sequences of phrases on over to more highbrow conceits regarding Ray Kurzweil’s principles of futurology, here, Philippakis seems a lot more at ease addressing simpler and more intimate expressions. He comes across defiantly in single “My Number,” declaring “We don’t need each other now.” That defiance turns to a simmering yearn for escape on “Everytime” (“Every time I see you/ I just want to sail away”), and straightforward in his affection on “Milk and Black Spiders” (“You’re the only one I need”).

Making strides toward more commercially viable material isn’t always a move that pays off, though with Holy Fire, Foals have sacrificed none of their unique identity in doing so. And yet, embracing a more immediate and less obviously obfuscated sound reveals another important stage in the band’s process of maturation. Abstraction is fine when employed properly, but Foals have reached the stage in their career where they have confidence enough not to rely on it.

The Cure – The Head On the Door

Foals : What Went Down