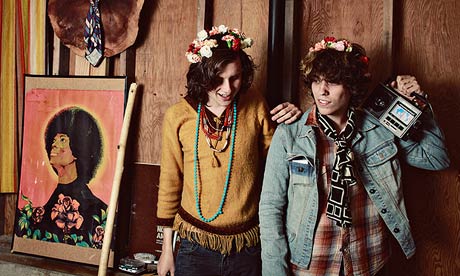 Pitchfork reports that, after an onstage meltdown at SXSW, Foxygen have canceled all of their European tour dates in support of new album We Are the 21st Century Ambassadors of Peace and Magic. The band released the following statement about the cancellations:

“We have some unfortunate news. We have to cancel our upcoming EU dates for May/June and upcoming EU summer festival dates. We’d like apologize to all our European fans and supporters. We know this causes frustration and headaches for ticket buyers and promoters alike. We assure you this is ultimately for the creative health of the band. We will back in EU soon and promise to make this up to all of you. Please understand. Thank you again, all of you. Your time, attention and support mean the world to us. Love, Foxygen.”

The band still plans on finishing up their U.S. tour dates and festival shows. Tour dates, canceled and otherwise, below.