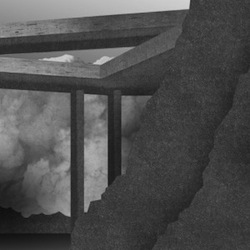 Held side by side, the covers of Frankie Rose’s last two albums look pretty similar — each one is awash in shades of gray and charcoal, abstract and gothic, cold and distant. But there’s a clear difference between the two. On last year’s Interstellar, there’s an illusion of movement and action, with vibrating lines emanating out of a far-off center like rays from a silvery sun. Yet the shapes on the front of Herein Wild feel emptier, and more severe, resembling, perhaps, the remnants of a house next to a jagged cliff (or The Cure’s Faith). It feels less like the indication of a work of vibrant activity than of quiet darkness.

A cautious reader might think this is far too intense an examination of two illustrations that, in all fairness, might not have that much of a literal connection to the music at all. But it’s hard not to also find the parallels in how the albums, themselves, stack up against each other. Texturally and musically, Herein Wild isn’t that dramatic a change from Interstellar. Both feature 10 tracks of jangle-heavy dream-pop and post-punk, anchored by Rose’s own versatile, dynamic vocals. But where that album was a powerful explosion of energy and light, undercut with moments of melancholy, this is the photo-negative of that, spending most of its time in the shadows, periodically rising up to briefly bask in a brilliant glow.

As Herein Wild gets off the ground, there’s a feeling that it may have even more momentum than its predecessor, the glam-inspired revved-up chords of “You For Me” hinting at some harder rock to come. It’s a bit of a fake-out though, the big riffs dropping out for Rose to dominate an ethereal passage with her own sweetly otherworldly vocals. The harder rocking energy comes back during the chorus, but it wavers, never committing fully to what’s ultimately a shimmering, just-ever-so-gothic pop record. Second track “Sorrow” bears that out with a melody that sounds like the sad B-side of last year’s “Know Me,” trading a shrugging frustration like, “It doesn’t hurt me/ I’d rather be deaf” for resigned lyrics like “Don’t ask me why/ Why there is sorrow.”

Deeper into the record, themes of water, drowning and plunging all become threaded together, on “Into Blue,” the sinister “The Depths,” and “Cliffs as High,” which backs a nightmare of plummeting into the sea with a minor key, string-heavy arrangement that sounds like a more organic take on any of Depeche Mode’s best, darkest ballads. And by the time Rose reaches “Requiem,” the sparse, acoustic final track, she reaches a familiar, pessimistic conclusion: “I’m afraid heaven and hell are the same.” Rose doesn’t exactly sound that different than she did in the past, just a little more bummed out and resigned, which means some of the luster of her past effort has been replaced with a thin layer of smoke and vapor. It suits her nicely enough, if not in a way that leads to such an immediate thrill. Yet, she is still perfectly capable of providing such a thing — toward the end of the record, Rose delivers a gorgeous, upbeat cover of The Damned’s “Street of Dreams.” It’s still dark, still slightly eerie, but it’s much welcome proof that, in spite of the beautiful sadness that Rose currently wields, she’s still capable of having some fun.