It begins with 14 seconds of harmonized guitar riffs, then the crack of a snare drum, sending those riffs climbing higher. At 46 seconds in, the beat becomes an almost danceable one, while two guitarists engage in a round of fretboard martial arts. By 1:13 a verse finally begins, spanning a scant 27 seconds before a soaring, full-throated chorus, comprising not three, not four, but eight chords. There’s another verse, a guitar solo, and once again, that magnificent chorus beaming down upon the listener like some glorious sermon from upon a heavy metal pulpit. There’s another guitar solo, and then a third (this time acoustic)—which might technically be a bridge, but you get the idea—and after a brief, drumless foray into psychedelic mist, one final, thunderous coda, revisiting those eight magnificent chords at half speed, ending with an exhausted drift of ringing guitar strings and pedal effects.

The song is “A Horse Called Golgotha,” track seven on Baroness’ Blue Record, and if you’re listening on vinyl, the first cut of side C. Apple puts my play count of the song at 24, which I know is way off. Counting the times I’ve listened to it on my record player, in my car, on mix CDs, Spotify, YouTube or actually while watching the band perform live, I’m guessing that since it’s been released, I’ve heard “Golgotha” well into the triple digits. And every single time, I want to hear that chorus a third time.

It’s such a powerful piece of music—heavy, melodic, almost overwhelming. It’s the kind of song that motivates you to climb to the summit of the loftiest peak, or push yourself that extra mile in a marathon. Yet “Golgotha” is just one of 12 outstanding tracks—eight songs plus two interludes, an intro and an outro, to be precise—on Baroness’ Blue Record, which holds the curious distinction of being both one of the greatest metal albums and one of the greatest rock albums of the past decade. The funny thing about a so-called “crossover” album like Blue Record, however, is that it filled a demand that had been going unanswered for a long time. With mainstream rock music mired in more than a decade of mediocrity, and post-hardcore subjected to Hot Topic gentrification, for several years at least, only metal could provide refuge for a listener in desperate need of catharsis and adrenaline. 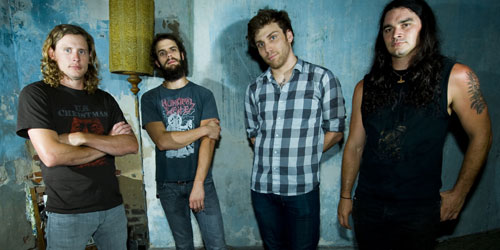 Metal listeners knew this all along, of course, but it took a while for other listeners—many of whom were still catching up on decades of other previously unexplored genres via the easy, free exchange of file sharing—to catch on. In the mid-‘00s, the growth of music blogs created a widespread network of niche micro tastemakers to bring underground sounds closer to the surface, though quite a few still shied away from heavy music. Some focused on noise and avant garde sounds. Some unearthed obscure African cassettes. But quite a few simply dug deeper into the seemingly endless well of indie, too much of which I can confidently say is a bad thing. A little twee goes a long way.

Slowly but surely, though, listeners began taking daytrips into the distant realms of metal, and some of them liked what they heard. Not everyone in online metal communities cared for catering to the tourists, though, and bands that found favor with broader audiences soon found themselves on the business end of the “hipster metal” label. Among such favorite targets were Mastodon, Sunn0))) and Isis, and to an even greater extent, bands like Early Man, Saviours and The Sword, who released albums on indie rock labels like Matador and Kemado. The frustration is understandable; metal shows are sacred places where nobody wears captain’s hats and Ke$ha t-shirts and everyone actually likes the music. (And as James Murphy might say, “They’re actually really, really nice.”) Less understandable were more offensive labels that cropped up afterward, like “girlfriend metal”—the argument being, as far as I understand it, that if it’s metal your girlfriend likes, it’s not metal enough. (Subtext: It’s metal for listeners in healthy sexual relationships?) One notable exampled used regularly is Kylesa, which incidentally has a female lead guitarist. (If only more guitarists were half as badass as Laura Pleasants.)

Baroness were definitely part of that conversation. But for all of their influences that appealed most to a hipster demographic (e.g. Fugazi, Mastodon), the whole picture revealed a band that most strongly reflected a tradition of Southern rock—they originally hail from Savannah, Ga.—mixed heavily with a reverence for classic metal. When listening to the dynamic, climactic guitar leads of John Baizley and Pete Adams, it’s hard not to hear echoes of Iron Maiden’s Dave Murray and Adrian Smith. Save for Sabbath, that’s about as pure as metal’s essence gets.

Baroness’ 2009 sophomore album Blue Record, however, is anything but traditional. With an even more aggressive push toward accessibility, bigger choruses and even (gasp!) an occasional disco hi-hat, Baroness built upon the success of their impressive debut Red Album with stronger songs and an even more concrete identity as instrumentally breathtaking metal musicians, not beholden to the restrictions of genre. If Red Album was the sound of a young band with something to say, Blue Record was their keynote.

The second of a suite albums defined by color—concluding with Gold & Grey—Blue Record is the kind of record you’d bring home and listen to on headphones while staring at the various details of its breathtaking cover art. Well, I would anyway. It’s not a concept album in any strictly defined sense, but there’s a sense of fluid cohesion to the album, not coincidentally reflected in the aquatic scene on the cover illustration designed by the band’s frontman, John Baizley. The piece depicts two regal, powerful women surrounded by fish and seaweed. One of them wears a headdress of flowers, crowned by a rooster; the other wears scales around her neck. It appears like a merger between mythology, comic books and the art nouveau style of Alphonse Mucha—as Baizley told OC Art Blog in 2012, “If you’re a heavy band, you can put something beautiful on your record cover, but it (can still be) dark and (tie) into the music being made.”

Once the needle hits the record, the experience grows ever more immersive, the opening swirl of sound on “Bullhead’s Psalm” sets the listener off on a journey that, though relatively brief, seems positively epic. The record itself is only about 45 minutes long, but when immersed in the sprawling sound of it, it’s easy to feel as if it’s twice that. Though, with an album this stuffed with highlights, it also goes by remarkably quickly, its roaring riffs on “The Sweetest Curse” bleeding into the breakneck rhythms of “Jake Leg,” gently descending into the deceptively serene waters of “Steel That Sleeps the Eye” before re-ascending back to the hallowed court of Valhalla on the awesome “Swollen and Halo.”

There’s a much more pronounced emphasis on instrumental technique on Blue Record than on vocals or lyrics, though that doesn’t mean they’re an afterthought. The call-and-response interaction between Baizley and Adams on “The Sweetest Curse” is both intense and evocative, the duo trading lines like “Curse with me/ Profane and discreet… Buried deep/In crowskin overcoat.” And while Baizley can roar with the best of metal’s unholy-throated screamers, his lyrics are angled toward the poetic and abstract, rather than sociopolitical or escapist. There are references to Prohibition on “Jake Leg,” shades of the Civil War on “War, Wisdom and Rhyme,” and themes of war, nature and protection on “A Horse Called Golgotha.” The details that Baizley peppers throughout the album — “The peach and the rattlesnake,” “burnt confederate steel,” “the stained horizon/ablaze with revolvers”—reflect a long and dark Southern history, but in context speak less about specific events or places as they do a palpable emotional intensity. In short, Blue Record might make you feel feelings.

I certainly did, anyway—still do. It’s an album that still manages to give me an endorphin rush whenever I hear it. It arrived at a time in my life when I most needed the B-12 shot it provided, following a year that left me exhausted by the loss and illnesses of loved ones, and one month before I got married. If ever an album existed that could catalyze fatigue into triumph and celebration, it’s this one. (My wife is also a fan, for the record.)

Blue Record took on more significance later on, about eight months after the band endured a harrowing bus accident in the UK that left the future of the group in doubt. At a SXSW showcase organized by Invisible Oranges, frontman John Baizley performed a solo set for the second time after nursing broken bones and recovering from surgery. He opened the set with the stark, gentle chords of “Steel That Sleeps The Eye,” a track once viewed as transitional on the album, but put in a different context here. And through the set, Baizley was charming, candid and heartfelt in his communication to fans about their experience and what it means to be back on stage. Sandwiched between black metal act Mutilation Rites and doom titans Pallbearer, it was an unexpected dose of emotion at a metal show. I actually choked up a little.

There were certainly doubts and sneers when Blue Record was released, mostly from fans insecure enough to cling to conservative metal ideals. Most of them went something like “Nice disco beats, bro.” But listeners averse to change in Baroness’ music missed the point. No two releases in their discography sound alike. The kernel of what makes them who they are—namely their harmonized riffs, post-hardcore intensity and strong penchant for soaring melodies—will remain. But the direction of the band is in constant flux. Not that a few naysayers got in the way: Decibel named it Album of the Year in 2009, and a long list of other publications broadcast accolades in Baroness’ direction.

With 2012’s Yellow and Green, Baroness released a longer, even more diverse album that’s a masterpiece in its own right, but also one that further raised the question of whether they were still a metal band. In 2012 I posed this question to Pete Adams, to which he replied, “Baroness has never been a straight-up metal band.” One year later, I asked John Baizley the same thing, and though his response added some broader context, he essentially echoed Adams’ sentiment: “Most of my friends are in metal bands. Most of the shows I go to are metal shows. I’ll always have respect and admiration for what we were and the people we were working with. But as we’ve gotten older, our interests have broadened… Our skills as musicians, songwriters and composers have broadened. So, we’ve always had the mindset that our music should reflect that sort of growth.”

Blue Record is, absolutely, a metal album. And yet, there’s nothing particularly conventional about the style of metal they play. In time, it may well mark an important period of transition—the point where Baroness ceased being a metal band as we know them, and something much bigger and more indefinable. With Blue Record, Baroness released one of the best metal albums of the decade. It just sounds a lot like rock ‘n’ roll.