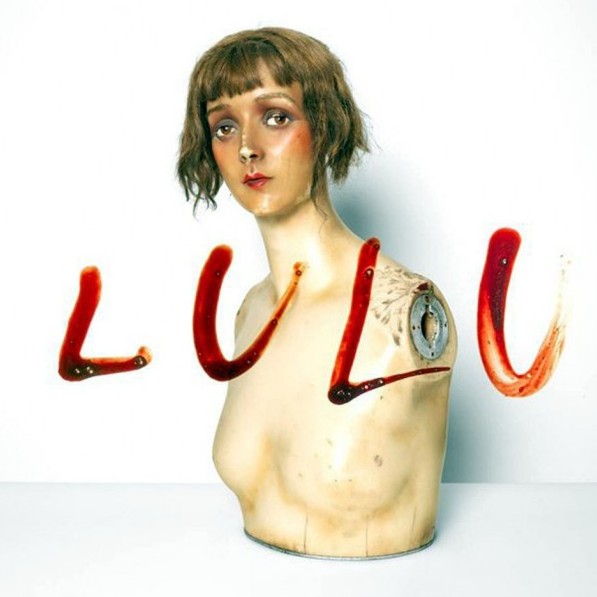 Note: This album was originally reviewed in November 2011, but ended up getting lost when Treble relaunched in January. In the interest of revisiting the god-awful album that started this series, we’re running it again to preserve the legacy of our horrified reaction.

Throughout their respective careers, Lou Reed and Metallica have each been responsible for enough bad ideas to keep a half-dozen bands busy for a decade or so. Of course, Reed got a much earlier start, following up his awesome, glam-charged Rock ‘n’ Roll Animal with the lackluster Sally Can’t Dance, and then just a year later destroying his listeners’ ears with over an hour of noise on Metal Machine Music. Now, there are plenty out there who will argue the merits of that very clanging, buzzing, back-feeding monster, but there aren’t many defenders of the generic Rock ‘n’ Roll Heart, or the mid-’80s goof Mistrial. And as for Metallica, well, pretty much everything they did after “Enter Sandman,” from eye-rolling Saint Anger to Lars Ulrich’s endless crusade against Napster, confirmed that the last lingering molecule of creativity in the band died with four of the Vietnam vet’s senses in the creepy video for “One.” As one of the most successful bands in the world, Metallica has apparently never had to second-guess any of their artistic decisions, because they manage to keep moving units regardless of their long string of missteps.

If you need a minute to process all of this information, then pause here, because what I’m about to say next puts both artists’ catalogues in context: Lulu, the collaborative album between Lou Reed and Metallica, is, collectively, their worst idea yet. From the beginning, the idea of Reed, an art rock veteran and poetic lyricist, making an album with Metallica, the world’s biggest metal band (now pretty much just heavy rock), was enough of a head-scratching idea for most listeners of either artist to have their doubts. But once Reed and Ulrich actually started talking about it, the idea began to inflate ever more into self-parody. Reed called the album “maybe the best thing done by anyone, ever,”while Ulrich said Reed was like a “solo version of Metallica.” It would be funny if they didn’t give the impression that they actually believed these asinine statements, which I’m afraid they do. And when you combine an artist who spent a good portion of the last 40 years either provoking listeners or not giving a shit, and another band who has spent the last 20 years isolated from constructive criticism, you arrive at something so bizarre and so terrible, it’s practically destined to be legendary.

To say that Lou Reed and Metallica are artistically incompatible doesn’t even come close to describing how polarized (and polarizing) the performances are on Lulu. There is a brief period, during the acoustic intro to first track “Brandenburg Gate,” in which the album doesn’t seem quite as ridiculous a match-up as all of the evidence would suggest. But that hope is dashed pretty quickly with the impending thud of Ulrich’s drums, which serve as a gateway for James Hetfield’s comically over-the-top howls of “SMALL TOWN GIRL!”, which continue for a solid three minutes. It’s cringe-worthy even by Hetfield standards, which sound only slightly less awful when he bellows “I’m the aggressor… these ten stor-ayyyys-uh” in the following track, “The View.”

Only a handful of tracks on Lulu offer the simple idea of Lou Reed spoken word over typical Metallica arena metal, notably “The View” and “Iced Honey.” These are, unbelievably, the most tolerable tracks on the album’s first disc (the full album is 87 minutes long, get comfortable). They’re not, however, good, but they at least seem to make some kind of sense, on a basic level of arithmetic. A track like “Pumping Blood,” meanwhile, is enough to make your head hurt. Beneath a perpetual guitar drone, Metallica pounds out their characteristic mainstream thrash, which, if the past two decades are any indication, is the only thing they actually know how to do. Reed himself, however, is the most jaw-droppingly ridiculous element of the seven-minute abomination, however, warbling lines ranging from “my coagulating heart!“, “waggle my ass like a dog prostitute“, and something about spurting like a “colored man’s dick.” At one point, Reed hollers out, “come on James!“, as if this were actually an informal jam session. If only Reed had the good sense to leave it at that.

There’s no question that Metallica is a poor fit to back up Reed; they seem ill equipped to tailor their sound to actually complement Reed’s voice in any way, and when they choose to merely stick to their strengths, they sound like they’re playing a completely different record. But then again, I almost don’t blame them; there’s no music on earth that could make Reed’s embarrassing one-liners actually sound good. These lyrics are bad (“I’m a woman who likes men.“), hilariously bad (“I would cut my legs and tits off/when I think of Boris Karloff…“), confusingly bad (“Kotex jukebox“). Reed’s question, “Are we both dead now?” at the close of “Dragon” might actually be the only conceptually comprehensible part of the whole 11-minute mess, which might give some indication of just how deep the disaster spiral goes.

Closer “Junior Dad,” a 20-minute beast of a track that removes Metallica entirely during its ten-minute long string-laden denouement, is the closest thing here to an actual triumph (still not that close), and most definitely the only success, even if it would have been more effective at, say, six minutes. A touching, somber and subtle tune rather than the seething rants of an old man set to various permutations of “Sad But True,” it at least plants the idea that maybe Lulu didn’t have to be a complete disaster. Unfortunately, the other 67 minutes say otherwise, and if I have my ‘rithmetic right, that’s still an “F.”