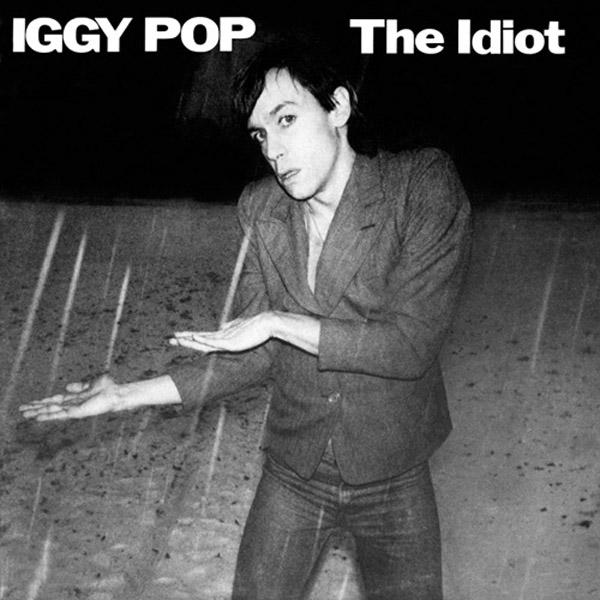 In the earlier half of the ’70s, Iggy Pop made a name for himself as the baddest of rock `n’ roll frontmen, creating pure bedlam and debauchery with his Detroit band of rock of derelicts, The Stooges. But after the band broke up following the release of third album Raw Power, Pop (or “Jim,” I guess, whatever) had become something of a waste case. Strung out and eventually self-committed to a mental institution, Pop nearly faded into obscurity, nearly becoming what Axl Rose would be today. But thanks to good ol’ pal David Bowie, that all came to an end. Pop was determined to start up his career in music again, and Bowie stood by him, co-writing songs and producing his “comeback” album, The Idiot.

Compared to Raw Power or Fun House, The Idiot is a decidedly more controlled, more subdued slice of Iggy. Gone were James Williamson’s blazing guitar riffs and Pop’s shrieking banshee freak-outs. Instead, under the tutelage of Bowie, Pop became a more sophisticated, yet decidedly more dark and disturbed rock singer. Think Bowie, mixed with Leonard Cohen and a touch of Peter Murphy, and you’re pretty close. With The Idiot, Iggy Pop forecasted anything but a bright future. That was something he just couldn’t do. Instead, it’s a collection of dim visions and sinister melodies. The overblown Stooges sound wasn’t in the cards for Pop for some time. As he said at the time of the release of The Idiot, “I’m not a punk anymore. I’m a damned man!”

Albums rarely begin as disturbingly as The Idiot does with “Sister Midnight.” Cold and unsettling, “Midnight” is driven by a robotic, slightly funky riff (which later resurfaced on “Red Money,” from Bowie’s Lodger) played by Carlos Alomar while Pop delivers a lyric telling of his Oedipal nightmares:

Then comes the slinky death romp of “Nightclubbing,” which was later featured in the film Trainspotting. Pop’s delivery is thoroughly emotionless and mechanical, mimicking the coked-up club patrons he lampoons in the song: “Nightclubbing/ we’re nightclubbing/ we walk like a ghost.” Pop mines similar lyrical content for the next song “Funtime,” one of the most punk-sounding tunes of the set. Side one closes with “Baby,” a song with a sound inevitably inspired by the atmosphere in Berlin, where the album was recorded. Essentially a break-up song, Pop songs, again, with almost no emotion, sounding eerie and ghostly, thanks to a heavy dose of reverb on his voice. In a deep croon, Pop offers to his former beloved: “We’re walking down the street of chance/ where the chance is always slim or none/ and the intentions unjust.” Just like he had done with his substance-abusing past, Pop was saying goodbye without regrets.

Side two opens with a song familiar to many, “China Girl.” Though it is most likely David Bowie’s decidedly glossier version from Let’s Dance that most have heard, and not this one. Iggy Pop’s version is more intense, more raw, and doesn’t feature the kitschy “Chinese” riffs that begin Bowie’s version. As such, it is the superior version, giving a far more impassioned performance (the most impassioned of this entire album, in fact) which lends a much needed, if somewhat frightening, human side to the record. Some say this song is about one of Pop’s own relationships, some say it’s about “china white” (cocaine), while others contend it’s about Western imperialism. The true meaning is not so apparent, but the most likely is that it’s actually something of a combination between love and politics. In one line, Pop sings “My little China girl/you shouldn’t mess with me/I’ll ruin everything you are” suggesting that Western culture would corrupt his innocent beauty. In another, he wails “I’d stumble into town/Just like a sacred cow/Visions of swastikas in my head/And plans for everyone,” suggesting the power hungry leaders of the “free world” and the atrocities that they would later commit. It has also been said that the song is written with the idea that women are fragile, like china dolls, thus lending the song its title. Still, the theme remains up for interpretation.

The remaining three songs on the second side are vastly different in style and themes. “Tiny Girls” is a short-ish, doo-wop sounding tale of hopeless love. Meanwhile the other two tunes, “Dum Dum Boys” and “Mass Production” are more epic and sinister. “Dum Dum Boys” is a paean to Pop’s former bandmates in The Stooges. In the intro, Pop rattles off the fates of each individual Stooge (“What about James?/ He’s gone straight…“) later pleading, “Where are you now/when I need your noise.” Still, no song is as maddening and fucked-up as the final dirge “Mass Production.” Essentially riding the same groove for eight minutes before descending into a noisy, electronic mess of warbling synths, “Mass Production” sounds like the factories Pop sings about.

Of all of Iggy Pop’s albums, including those with The Stooges, The Idiot is by far the darkest. It creeps under your skin and sets up camp, creeping up to your psyche, just to give it a tap every now and then. It may give you nightmares about disco zombies, incest, Nazis or being chopped up in an assembly line. It was the album that started Joy Division’s first jam session, and it was the album Ian Curtis listened to before he hanged himself. The Idiot may have been Iggy Pop’s new beginning, but it’s certainly not for beginners.