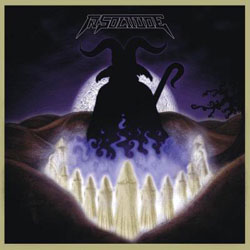 For as much as the ’00s and beyond have been about innovation and breaking boundaries within metal, there has also been a startling clip of vibrant and well-executed traditional heavy metal to emerge in the past decade. An entire new generation seems to have skipped over the harshest developments in death and black metal entirely, sticking to their traditional, speed-, power- and NWOBHM guns forged by the likes of Iron Maiden and Mercyful Fate. They span worldwide and come in a variety of different flavors, from the cheesy simplicity of Los Angeles’ White Wizzard, to the epic storytelling of Chicago’s Dawnbringer, and the satanic shenanigans of Sweden’s Ghost. The heavy metal of old lives on.

Sweden’s In Solitude, one of the strongest of the bunch, made one hell of a statement with their 2011 sophomore album, The World. The Flesh. The Devil., showing off not only through complex harmonized riffs and epic-length songs, but through extraordinarily strong melodies and hooks. Their sound may have been classic in an aesthetic sense, but their chops were finely honed and sharp enough to carve a unique niche.

In Solitude’s 2008 self-titled debut, now reissued on Season of Mist with a pair of bonus tracks, isn’t quite as polished or commanding as The World, but as an opening shot, it’s still a damn impressive way for a band to introduce itself. There’s more than a hint of vintage crackle in the band’s crunchy power-chord riffs, to the extent that its proximity to the sound of an ’80s metal release can’t be coincidental. In Solitude rocks out old school, and they do it well. Vocalist Hornper doesn’t wail at the same castrato-level octaves as King Diamond, but he nonetheless has commanding enough pipes to lead the band through Mercyful Fate-style rockers like “In the Darkness” and “Witches Sabbath.” “Kathedral” has the badass crunch of Judas Priest, and “7th Ghost” gallops like the Four Horsemen on a beer run.

Released in extremely limited quantities on its first pressing, In Solitude’s debut has a certain cult appeal, but remains accessible enough to transcend it. It’s a fun, thrilling enough album to satiate old-timer metalheads, but has a youthful appeal regardless of its influences. With a new album on the way later on in 2013, the band presents the opportunity to outdo themselves, but this repressed relic is a fine way to occupy the next several months until that new album materializes.