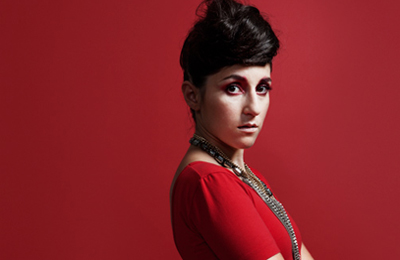 Los Angeles singer and songwriter Ramona Gonzalez has built up a steady head of buzz over the past few years as the artist behind electronic pop outfit Nite Jewel, arriving in time to get erroneously lumped in with the now dated rush of chillwave, but unconventional enough to escape the pigeonhole for long. Late in 2011, however, Nite Jewel announced a signing with Secretly Canadian, one of the bigger indie rock labels in the United States, and with it a leap in fidelity, as well as a wider platform for exposure.

Nite Jewel’s new album, One Second of Love, finds Gonzalez and husband/collaborator Cole Grief-Neill, as well as a handful of other musicians who lend their talents to the album, embracing a wider and more vibrant pop sound. There are moments, as on the title track, in which Gonzalez opts for a brighter, more heavily pulsing electronic approach. Yet on a highlight such as “In the Dark,” Nite Jewel comes across with a kind of dark sophisti-pop appeal, blending the sultriness of Sadé with the sleek, dark new wave of Chromatics. It’s a fun album, certainly, but it carries a fair amount of depth as well.

Gonzalez spoke to us from her Los Angeles home about her new album, artistic freedom and the singers she admires.

Treble: How much of One Second of Love was written prior to recording? Did you work on it all at once? Or was it done in pieces?

Ramona Gonzalez: The record was recorded in several stages. About a third of it was done in an improvisational manner in Southern California. And a third was done more on my own. And then another third I had written to be played with a band, I just didn’t have the musicians at the time. Like, for one song, “Mind and Eyes,” I had in my mind that a live drummer would play on it. I just needed to find a drummer to play it.

Treble: Was there a general theme or thread you wanted the album to follow?

RG: About two and a half years ago, I wanted to record an instrumental electronic record. When I was in college, I was listening to a lot of krautrock — Cluster, Harmonia — that kind of stuff. We have some friends with a studio in Los Angeles, so Cole and I headed down there and spent a few months recording. But it eventually evolved and turned into more of a pop record.

Treble: At what point did the direction of the album change?

RG: Over the course of the four-month to six-month period, I took the songs we had and started demoing out vocal ideas. I didn’t have the patience to do an ambient record, so we eventually just abandoned that idea and gravitated toward doing more vocal tracks.

Treble: You’ve mentioned in other venues that the title of the record, One Second of Love, has to do with relationships and what gets in the way of meaningful connections today. But there’s also a very romantic feel to the album. Was this a conscious juxtaposition on your part?

RG: I think I’ve always… with each record I’ve done there has been a blend of romantic and critical ideas. When I went in to record, it was becoming more apparent there was a system at work in the music. I wanted to get outside of that. There’s a weak link to connections we make on the internet, so I wanted to critique these connections, and I thought this was a good outlet for that.

Treble: Who are some of the singers that inspire you?

RG: I mean, I tend to admire any really good singers. I admire someone like Lou Reed for his poetry. But also, I really admire someone like David Bowie for his voice… he’s very talented. And Whitney (Houston). I listened to her a lot as a child. My dad had me sing along to her songs in the car. Just practicing. And watching Star Search, I would unabashedly admire anyone among those competitors.

But I also admire more understated singers. Like Aaliyah — she had a great voice, but it was not over the top.

Treble: You’ve been known to work in visual mediums as well, such as film installations. Are there any plans merge this with your music?

RG: Visual art is something I did at a certain point in time. But I don’t think the music I make necessarily needs a visual component. It’s not what I’m going for in terms of a band. Dancing is something that works with music, but not visual art.

Treble: Your music tends to blend multiple different styles — R&B, pop, electronic, dance — do you find some freedom in not sticking to one specific genre?

RG: Definitely. It’s super liberating. But I also think it’s kind of arbitrary because there’s also a constant tendency to genre-fy. I mean, things were different 30 years ago. What would be considered a successful record back then was selling 30,000 copies. If you do that, then you can do whatever the fuck you want. I mean, I look at artists like Lou Reed or David Bowie. Transformer or “Heroes” — these are albums that transcend genres.

I take cues from albums like that. If you just have fun and be true and do whatever you want, then I think the listeners will follow.

Nite Jewel : One Second of Love