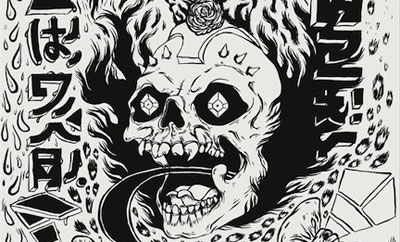 For around eight years, Treble has delivered a reliable, solid Album of the Week mix quarterly, packed with selections from our favorite new albums of the year. But the more we thought about it, the more we realized how exclusionary a mix-making process that was. A lot of great songs were ignored, either because they were single- or EP-only, or simply great standalone tracks from albums that maybe didn’t quite earn the honor we bestow weekly. So today we start a new tradition: the Endless Playlist. We’ve got more than 25 essential jams for you to spin, and we’ll be adding more throughout the year. By year’s end, we’ll have more than 100, easily. But don’t worry, we’ll make sure to keep you updated. Enjoy!

We also posted our playlist on Spotify. (Some tracks are unavailable on Spotify at this time, but will be soon.)

“Wasted Days” begins as a direct, blistering punk rocker before dabbling in a noisy jam session, ultimately ending where it began, a sort of encore performance of its undeniable hooks.

“Faiseurs de Mondes” finds French metalgazer Niege juxtaposing his own melodic, angelic vocals with the occasional guttural hiss. That said, these elements only serve to add extra layers of depth to Alcest’s intriguing take on shoegaze.

“Come Healing” sounds as though it has existed long in the collective memory, and is humbly important enough to elbow the likes of “So Long, Marianne” and “Bird On A Wire” out of consideration’s way.

Imperial Teen – “All the Same”
From Feel The Sound
(Merge)

As successful a summation of pop perfection that we’ve heard in we can’t remember when, yet there are sufficient instances of real meat to sink your teeth into, such as this, the album’s “eye of the duck” moment.

With a little help from Beach House’s Victoria Legend, Air prove that when they put their hearts into it, they can still achieve liftoff.

From the distorted, bassy introduction of “Inspector Norse,” Todd Terje gets the space-disco party going pretty rapidly, with all kinds of fun noises popping in and out of an undeniable party jam.

What Sharon Van Etten reveals on Tramp comprises some surprising and breathtaking new signs of growth and versatility, as on single “Serpents,” which shows the singer-songwriter soaring into a satisfyingly noisy rock song.

John Talabot – “So Will Be Now” (ft. Pional)
From fIN
(Permanent Vacation)

Spanish house producer John Talabot has a way with spacey grooves, and “So Will Be Now” is further evidence of that, all icy, echoing synth and Pional’s soulful vocals.

The bright and flashy fun of Hans-Peter Lindstrom’s “De Javu” is a track so purely fun on a surface level that its seven minutes easily feel like half that.

James Leyland Kirby has been exploring memory and sonic associations through curious, ambient tracks for a while now, and touches upon ever more stunning atmosphere here.

Though much of Interstellar looks beyond Rose’s past work toward headier and more massive sonic ideals, some of the album’s brightest moments, such as “Know Me,” serve as more polished and nuanced updates to the noise pop she’s done so well in recent years.

Once you succumb to the neurotic flow of the album, the entire 13-track sequence is a brilliant listen, but there are definitely highlights, such as this dreamy single.

Sleigh Bells at their most irresistible, on “End of the Line” the duo ditches the heavy riffage and ups embraces their pop smarts to remarkable effect.

Nina Kraviz twists and bends house music into her own cool, unique shapes and with “Ghetto Kraviz,” does so through eerie synths, skeletal beats and odd, disaffected vocals.

Perfume Genius’ Mike Hadreas offers to be a “shadow of a shadow”, but with this heartbreaking, gospel-tinged ballad, he deserves much more than that.

All of the sadness and alienation that arises throughout Mr. M would be a pretty serious bummer to endure, were it not for the absolutely stunning melodies and arrangements that the band has crafted, like on this peppy highlight.

“Lafaye,” the first single and immediate highlight, behaves not so much like a diversion into dream pop hallucinations so much as a pure pop indulgence, one that’s extremely hard not to love.

Little Rock doom metallers Pallbearer lets their riffs ascend to the heavens, rather than descend into the murky depths, on mesmerizing standout “The Legend.”

The song may have its roots in recollected images from Last Year at Marienbad, but it is something altogether different, something almost diametrically opposed to Resnais’ film’s austerity of tone and framing, its sharp contrasts of black and white.

Ramona Gonzalez achieves a kind of sexy perfection on “In the Dark,” with her refrain of “holding hands in the dark” sounding both romantic and comforting.

Brooklyn noise-rock wreckers The Men push even harder into melodic terrain on the title track to their latest, sounding more Buzzcocks than Big Black. It’s still brutal and bold, of course, but catchier than ever.

Up-and-coming UK duo AlunaGeorge does bass music right, fusing dubstep with pop and R&B grooves for something altogether chill, yet danceable and seductive.

Brooklyn’s Bear In Heaven retains a mystical intrigue on their latest, but opt for bigger and brighter hooks, and achieve pop single perfection with “Reflection of You”.

Santigold – “Disparate Youth”
From Master of My Make Believe
(Atlantic-Downtown)

Santigold is embarrassed that LMFAO performed at the Super Bowl, which wouldn’t matter much if her own pop skills didn’t give her some moral high ground. On “Disparate Youth,” from her forthcoming album, she makes that perfectly clear.