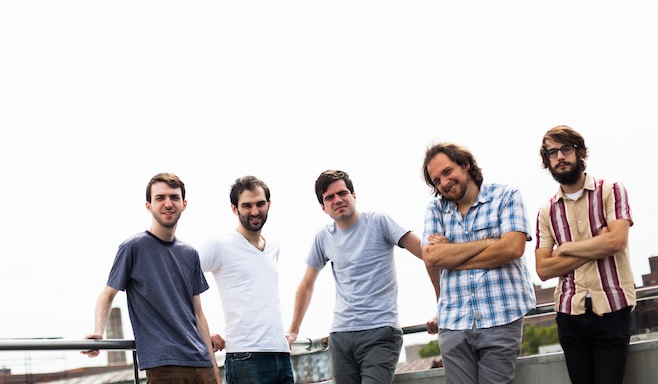 So read the Tumblr announcement Titus Andronicus posted earlier this month to coincide with a nationwide tour with Ceremony. But for Titus Andronicus, punk never really left. Since the release of 2008’s The Airing of Grievances, the New Jersey-based band has offered up a raucous and catchy brand of earnest abrasion, the likes of which fall somewhere between the home-state heroism of Bruce Springsteen and the drunken antics of the Replacements. This is the band whose most memorable lyrics include “You will always be a loser!” and “Fuck everyone! Fuck me!”

For a group so invested in uproarious gleeful chaos, however, Titus Andronicus is certainly ambitious. In 2010, the group released a civil war-themed concept album titled The Monitor, which included the likes of The Hold Steady’s Craig Finn and Vivian Girls’ Cassie Ramone reading quotes from Walt Whitman and Jefferson Davis. But as huge and impressive as that album was, Titus Andronicus had no plans to follow it up with something bigger.

Local Business, the band’s third album and first since the departure of guitarist Amy Klein, is not the sprawling conceptual work that its predecessor was, but it’s still a uniquely ambitious record, one that boasts a range of material, from the lengthy closing epic “Tried to Quit Smoking” to the brief hilarity of punk rock jam session “Food Fight!” In a recent phone conversation with Treble, frontman Patrick Stickles explained from his home in New Jersey that adding a bit more levity and humor to the album was a major priority, as was dialing back the conceptual sprawl.

“We couldn’t really do more in that arena,” Stickles said. “It was a reactionary measure. We just wanted to do something fun, a little more rock `n’ roll this time.

“We were striving for more of a wider emotional palette,” Stickles continues. “The first two records were a lot more doom and gloom. And I think we needed a little more comic relief. The album was very Replacements-inspired in that way. They had lots of humor in their music along with a lot of serious stuff.”

The material on Local Business largely concerns the same struggles with society that Titus Andronicus have always tackled, with an affably nihilistic streak and a pessimism that miraculously avoids being a total downer. Yet the album also contains some personal accounts from Stickles that, for someone in his position, might be a bit difficult to address in a public forum. One such song, “My Eating Disorder,” touches upon an actual eating disorder he’s afflicted by, selective eating disorder. Another, “Electric Man,” is a catchy party tune inspired by a real life event in which Stickles was electrocuted.

Yet for as personal as some of these songs get, Stickles sees no reason to put any barriers between his own experience and his audience.

“It can be a little scary sometimes,” says Stickles. “But I just think honesty is the best policy. I can only speak about my own experience. For me, there’s really no way to talk about any other experience. People always say you should write what you know, and that’s what I do. I won’t ever be writing fiction.

“Thematic unity is good in any sort of art form,” he continues. “I’m just not good at coming up with stories.”

Coming up with stories may not be Stickles’ strength — that’s a topic ripe for debate. However, Local Business is rife with one-liners and eloquently articulated turns of phrase. The very first song on the album, “Ecce Homo,” comes at the listener with a real doozy: “I think by now we’ve established everything is inherently worthless/ and there’s nothing in the universe with any kind of objective purpose.” This sets a characteristically and cynically thoughtful tone for the remainder of the album, which teeters between exclamatory rallying cries and punk rock poetry. Stickles certainly makes it sound effortless, though he readily emphasizes the amount of time and thought that goes into the lyrics he writes.

“These songs were written over a year and a half period,” Stickles said. “And it took a long time to get the lyrics to fit in with these songs. I don’t believe in just saying whatever — “baby, baby, yeah.” A lot of bands’ lyrics are just sort of beside the point. I appreciate it when bands put in the effort to have some meaning in their lyrics.”

For as many awful circumstances that led up to the release of Local Business — Stickles’ electrocution, witnessing a fatal car wreck on the highway — coupled with the general sense of hopelessness that Titus Andronicus frequently celebrates, the album is nonetheless a bit more upbeat in tone. And the title of the album, Stickles explains, is their positive statement of solidarity with the underdogs of the world.

“The most literal reason [we chose the name Local Business] is just in the support of local businesses,” Stickles said. “They’re always in danger of the corporate ogre that gains strength over time. And we like to root for the underdog. Another reason is that we are a business. That’s a funny thing for a punk band to say, when you’re critical of consumerism and capitalism, but we’re also complicit.

“This record is also very much about the empowerment of the little guy in the face of society,” he continues. “And yet another, fourth reason, where the last record had a kind of historical theme, this one is dedicated to more contemporary affairs.”

However, Titus Andronicus is not, explicitly, a band of activists or politically motivated songwriters. It’s not unusual for Stickles to take on a hot-button issue via social networking, like the time he questioned Kurt Vile’s decision to let Bank of America use one of his songs (which was less of a beef than a civil, mild-mannered disagreement). But Stickles maintains Titus Andronicus is not an issue-oriented band.

“We’re a political band to the extent that the personal is political,” Stickles said. “We’re not concerned with the particulars of governing. We don’t have a `Vote Yes on Prop Whatever’ song. But we encourage people to think about how to conduct themselves in society.”

Above all, through changes in lineup and theme, higher fidelity and broader ambitions, Titus Andronicus is and will always be a punk band, as Stickles explains, simply for the reason that punk stands for playing by one’s own rules.

“Punk means doing whatever you want,” Stickles said. “It’s the freedom to determine your own values. It’s the absence of any inherit meaning, and the ability to create your own. Punk is more than being about leather jackets or sounding like the Ramones.

“It’s about celebrating the individual — the personal.”