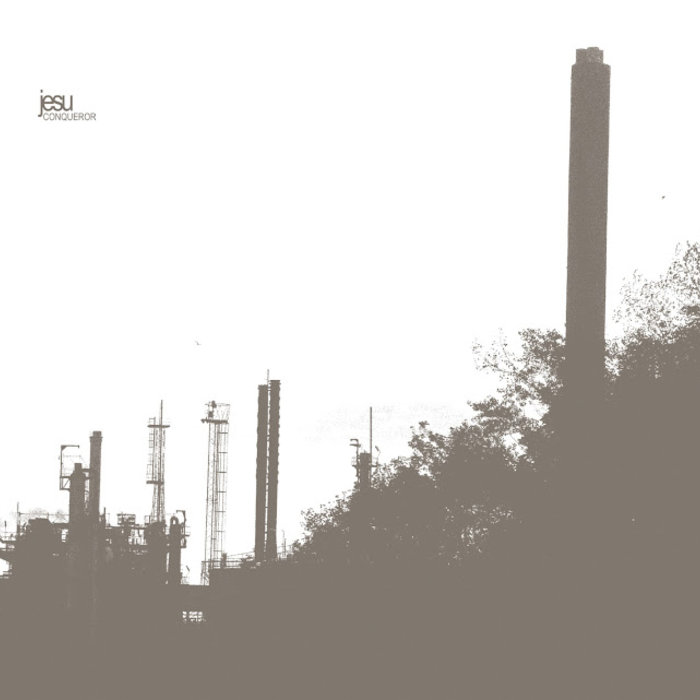 We love debuts, but what excites us even more is when a band we already like gets even better. Most of the time, that ‘next level’ signifies a complexity in songwriting, an addition of instruments, or simply the intangible quality of improvement that comes with maturity and experience. But sometimes, just sometimes, a band not only takes themselves to the next level, but an entire genre of music with them. For years, Birmingham, England’s Justin Broadrick has been the ringleader of a number of genre-shackled bands that languished in the shadows of their peers. The first, Napalm Death, was the one exception, being at the forefront of the grindcore movement. But subsequent projects, and there are a lot of them, found Broadrick behind numerous 8-balls, despite an abundance of talent. With the inception of Jesu (yay-soo), he finally began to find his own footing, only to find them planted in the stratosphere with Conqueror, his latest album release, a more than significant step forward for an entire genre, as well as the actual band.

Jesu is Latin for, well, you should be able to figure that one out, and is at least the third band in Broadrick’s history to be rooted in the divine. Yet, nothing has sounded as heavenly as does his new album, Conqueror. One can’t also help but notice that the band and album initials make up ‘J.C.’ Coincidence? Metal has been going through a much-needed renaissance lately with bands like Boris, Mastodon and Isis refining what was good about the genre, deconstructing it and then building it right back up again in their own respective ways. Jesu does the same, combining the strength of sludgy heavy metal guitars, the darkness of industrial synth, and the dreaminess of shoegazing into one incredibly compelling package. Broadrick is not the first visionary to come from a doom metal background. Sunn O))) is merely one example of another cutting edge act born from the ashes of the music that is the devil’s playground, and funnily enough, Broadrick is also a touring member of that particular band! But it is Broadrick’s compositions as Jesu that will garner him attention this year, as Conqueror is easily already one of the best albums of the year.

The opening title track is indicative of what Jesu has to offer. Cascading guitars pound you like unrelenting surf until, when you’re about to cry uncle, Broadrick’s soothing vocals lull you back into a sensation that you’re merely floating above those breaking waves. Yes, I used the word `soothing’ in a pseudo-heavy metal review. One of the things I have had a really hard time with in the past few years in trying to rediscover metal is the infamous `cookie monster’ voice. You know, when the lead singer switches from a normal singing voice to one that belongs with a set of googly eyes and bright blue fur. “Old Year,” the second track on the album, has Broadrick’s voice stretching into J. Robbins territory over loping drums and inspired guitar breaks.

Although each track can be considered epic, only “Weightless & Horizontal” stretches beyond the ten-minute mark, and gloriously so. The Sigur Rós-like marching build-up at the end alone is worth the listening to this particular song. “Brighteyes,” as far as I know having nothing to do with either Conor Oberst or Watership Down, is a particular standout, churning with kinetic energy and various guitars that both defy and honor the traditions of metal. “Mother Earth” is definitely a song that will ease the minds of those waiting for the return of My Bloody Valentine. Throughout each song, Broadrick puts forth lyrics that at first may seem sparse and simple, but at second glance appear wise, if not a little depressing.

All of this together adds to the brilliance of Jesu, the project for which Justin Broadrick has seemingly been waiting his entire life. With Chinese Democracy finally getting a release date, Rockstar Supernova combining old school metal talent in the tackiest way possible, and Van Halen reuniting when no one was really asking, heavy metal was more in need of a shot in the arm than ever. Mastodon, Isis and Boris can’t do it alone, so, like some kind of ‘savior,’ here comes Jesu. The most famous instance of the Latin term is from Bach’s “Jesu, Joy of Man’s Desiring.” Well, this year I’ve received no greater joy than in listening to Conqueror.