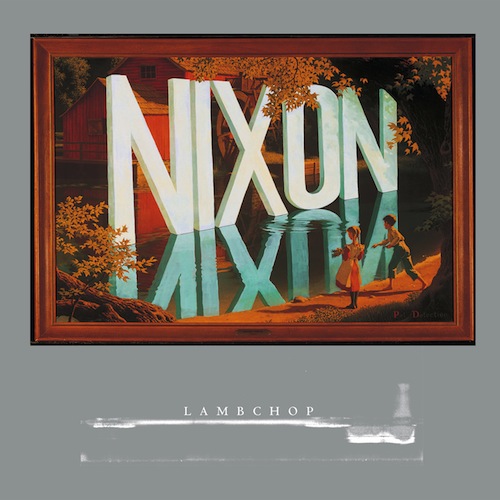 Amorphous, unbound by genre, and generally out of step with most any musical trends that have coincided with their career to date, Nashville’s Lambchop have always been a tricky band to get one’s head around. If you can even call them a band in the classic sense of the word; their personnel changes on the regular, swelling to an ensemble 18 musicians deep, or on more recent albums like Mr. M, paring down to a more manageable number, like six or seven. However vast or simplified the version of Lambchop one chooses to take in, however, it’s still an outgrowth of the peculiar creative vision of Kurt Wagner, a man with a keen knack for lush chamber-pop tunes, a quirkily captivating falsetto, and the last trucker cap in indie rock to be worn sans irony.

Wagner’s vision reached an unexpectedly lofty apex in 2000 with the release of Nixon, a so-called concept album about the younger halcyon days of president-to-be Richard Milhous Nixon. Of course, it takes a lot of digging, reaching and squinting to figure out how, exactly, any of the album pertains to the 37th President of the United States. It operates much like prior Lambchop albums such as Thriller and What Another Man Spills, primarily comprising lush, Bacharach-inspired pop songs with occasional countrypolitan accompaniment, while occasionally taking lazy detours through soul and funk and the odd public-domain folk song reworked into post-punk. Wagner, himself, says that Nixon “might’ve been the peak of the 14-person Lambchop,” via press release, and the group has arguably never sounded as sumptuous and rich as they do here.

And true to Lambchop’s M.O., Nixon begins slowly and softly, not in any particular hurry to get to the single (there was just one and it was six minutes long) or fire up the rock songs (there weren’t any of those, unless you count macabre closer “The Butcher Boy” and “The Petrified Florist,” which the band holds until the end). Instead, the record beams in gently through AM radio static before the subdued sounds of “The Old Gold Shoe” kick in, with Wagner’s smoky baritone beginning a serenade to an “old, gold stereo.” With its rich arrangement of strings and horns, it feels a lot like a lost orchestral pop song from the 1960s, and you can practically hear the record spinning in Don Draper’s living room — not that you could at the time, what with Mad Men being eight years or so from existing.

If “The Old Gold Shoe” positions Nixon at first as a characteristic Lambchop album, it’s with the next track, “Grumpus,” that the group begins to show exactly what they’re made of. It’s a string-laden funk tune, indebted to Curtis Mayfield more than Glen Campbell, though the closer one gets to the end of its four-minute, 19-second running time, the more acclimated the band sounds to a deeper rhythmic base. But it’s where the band splits the difference between more delicately orchestrated pop and soulful indie rock that they strike the mother lode, particularly on the climactic “You Masculine You” and the phenomenal, gospel-influenced “Up With People.” The latter — with its soaring refrain, “Come on progeny” — is the best song they ever wrote, in fact.

Certainly, Nixon is a fine example of some of Lambchop’s best songwriting, but more than anything, the album is a triumph of arrangement and production. Getting 14 people in a studio at the same time is hard enough, but making them sound good together is even trickier. And on Nixon, the last Lambchop album to be recorded with all analog technology, they sound phenomenal. As for how vintage the tech is, that might not be of much consequence, though anything with so many layers seems better suited to analog. It’s actually a bit ironic, that; this is one of the first albums I downloaded from Audiogalaxy my Freshman year of college (yes, I bought it afterward, mother).

Reissued as part of Merge’s 25th anniversary series, Nixon comes packaged with a bonus live EP, How I Met Cat Power, which mostly comprises Wagner solo live versions of songs from the album, plus 1998’s “The Saturday Option.” And they certainly hold up wonderfully even without the added players, but some of the character is certainly lost. Nixon is about the luxurious landscapes that one can get lost in, just as much as it certainly is for some people about trying to find out how songs about problem children and bloodthirsty murderers somehow connect to Richard Nixon. It’s not entirely a Rorschach test — interpretation or massive production aside, the songs are rock solid. It’s what can be explored in those deeper layers that makes it so rewarding 14 years later.

Lambchop : This Is (What I Wanted To Tell You)