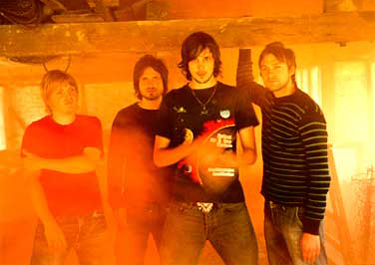 Amidst the chatter in a crowded Seattle rock club, the house lights dim and the “Baba O’Riley”-esque keyboard music of “I.D.” begins as four shaggy-haired Brits enter from stage left. After a minute and a half of intro, another man enters, cocksure and doing his best Jagger impression, raising his plastic cup of beer to the audience, looking like a cross between Liam Gallagher in mannerism and a little Ewan McGregor in features. Kasabian has arrived in America.

Just who is Kasabian? Four lads from Leicester? Yes. A group named after the getaway driver for Charles Manson? Sure. A band that’s taken England by storm and is poised to create a musical revolution in the rest of the world as well? Most certainly. By their own admission, the best band in Britain? Maybe. It’s been since the Gallagher brothers broke onto the scene since Americans have seen such British balls and swagger and Kasabian has the music to back it up.

No one else is here / And I can’t get, since I’m nothing

Kasabian are quite concerned about the state of British music today. While American band after American band use the UK as their testing ground for thrift store togged garage rockers, Leicester’s own (and I mean only) band, Kasabian, are more concerned about reviving the British music scene than of conquering America. “It’s about time we got some British music back out there,” Kasabian bassist Chris Edwards told me, “shit’s been lackin’, the last ten years there’s been no good British bands out there. Back in like the 90’s there was Oasis, Verve, Supergrass, Pulp, ya know what I mean?”

No one else gets high / And I can’t sleep, cause I’ve got nothing

So, is Kasabian trying to fill the gap that has been vacant over the last decade? Not by any means. That’s exactly what they’re railing against. In an NME interview, frontman Tom Meighan was quoted as saying, “Fuck the Americans” in response to questions about the slew of Strokes wanna-bes coming to England. Edwards was quick to defend his bandmate and make sure that his meaning was clear, that they were sick of a cookie-cutter sound and wanted to get rid of bands that were just trying to fill a gap. From America’s point of view, there truly is a new British Invasion with such bands as Kasabian, Bloc Party, Kaiser Chiefs, Futureheads, Doves, Keane, Franz Ferdinand and the like. Edwards isn’t satisfied yet. I asked him what he thought of England’s music scene. “It’s getting there. It’s slowly getting there. There’s been a few bands. I don’t know. I’m still not feeling it. I think they’re just doing it to fill the gap for the time being. They do it really well. But like Bloc Party, they’re cool. We did a show with them like a year ago. They’re nice lads. The Zutons, people like that. There’s another band called The Ordinary Boys, I don’t think they’re out here yet. So there’s some good bands coming through. It’s just that we gotta get that feeling back into it again, it’s all gone a bit flat, lifeless.”

Feeling I am lost / Control to a higher power

I mention to him that Kasabian is anything but flat and lifeless, that the album is truly a celebration of music. “That’s exactly it,” he says, “we just take twenty different kinds of music, or even more, like a thousand. Information that’s been stuffed into our heads for the last twenty-four years of just music. That’s why it’s the best of everything. We’ve just taken the best elements out of every kind of music mixed them together in the pot of the CD. We’ve not copied anyone, but we’ve got influence from every genre of music from classical to hip-hop to rock to synthy kind of music like Air. It’s cool.” Some of the songs in Kasabian’s debut are quite cinematic in feel and Edwards acknowledged that influence as well. “Film score is a big interest for us as well, Danny Elfman, John Williams, people like that. We listen to a lot of film soundtracks as well so I think, again, that’s just been put into the mix as well.”

Music is my, my love

So are there any American bands that Kasabian is into right now? “We like more bands like DJ Shadow, Blackalicious. There’s a band from Philadelphia called Mad Action. They’ve been touring in the UK and about to be signed by Domino. I’m looking out for them cuz I think we’re touring with them in May. They’re friends of ours as well.” By the way, the guys in Mad Action actually remixed the song “Cutt Off” for the single release early in the year. I had to admit that I had somewhat of a crazy fantasy (no, not that kind), an ulterior motive in bringing up American acts. I didn’t know if Edwards and the rest of the band knew that the one and only Bob Dylan was playing just down the street from the venue. While I didn’t want to take away from the Kasabian show, I thought I might be able to convince them to go down the street after their set and take me with them. I envisioned us sneaking out just after they left the stage, whisking down Pike Street and getting in during Dylan’s last few songs before we would all meet backstage and possibly have a little wine, smoke a little something, and just hang out. I mean, the frickin’ Beatles smoked out with Dylan! Silly to be sure, or was it? I asked if he was aware of the coincidence. “Is he? Shit! Where’s that? Oh man! What time’s he go on? I’m gonna have a word with the tour manager.”

No one else is here / and I can’t get, since I’m nothing

So where the hell is Leicester and why haven’t many bands come from there? “We’re not Big Eddie, but we’re the biggest band ever to play out of there. I like the way that we’re the only band from Leicester. A thousand bands come out of London, Liverpool, and Manchester. We do kind of represent it. We have put it on the map a little bit. Not many people know where it is.” And even with this hometown pride, the boys live hard. There’s almost a sense of foreboding about the rock and roll lifestyle in a number of ways. With bands like Oasis having been around for over ten years, New Order still around after 25 years, and a band that Kasabian opened for, The Who, going for over 40, I wondered where the band saw themselves in the next ten to twenty years at least. “Dead,” was the quick answer Edwards gave, albeit with a smile, “keep going the way we are, man. Six Feet Under. Fucking hell! But if people still love it like they do with the Who you can still go out there and blow people to pieces. But there’s bands that go out there and try and write new songs….in thirty years if we’re still playing and writing songs that people dig, we’ll still play, ya know what I mean?”

The band had just arrived in Seattle after a three day bus ride from St. Louis (which Edwards pronounced Lou-ee, awesome) and I wondered why they didn’t fly. “We had the choice to fly or ride the bus and I chose the bus cause I wanted to see the middle states. I wanted to see Utah and Idaho. I don’t know why.” I chimed in, “There’s not much there.” “No, there’s nothing there. Nothing Whatsoever. But I just wanted to see it cause I’ve never going to go back there. Ever.” More cryptic predictions or just a definite assertion that he’s never making that mistake again?

Feeling I am lost / Control to a higher force

Kasabian is touring with The Music right now through America. Edwards claims that most people are coming out to see the headliner, but in Seattle and reportedly Portland, the act most people are coming to see is Leicester’s finest. After playing large festivals like Glastonbury, to 20,000 people, seeing their popularity as a surprise has kind of worn off, but there have been some fans who have took them off guard, like Liam Gallagher. “[It’s] Weird. You don’t think these people know about you. But they do.” And speaking of famous fans, I ask if they’ve heard from Linda Kasabian yet. “Yeah, she’s on the guest list,” he jokes, leading me on for a few seconds, “If she shows up I’ll have a beer with her. If you’re out there Linda, reading this, come down and have a beer.”

Kasabian’s message is simple, it’s actually put forward in a manifesto. That message is simply `be yourself’. “Yeah, that’s it. That’s what we’re doing. No one told us to dress like this. No magazine told us how to dress or look or anything. Just be yourself. We make music that we like, we play music that we want to listen to. Don’t let anyone tell you how to write a song or paint a picture or how to dress. Be Yourself. I think people kind of respect that as well. We’re not a contrived band, not trying to fill a gap. We just do what we do and it seems to work.” Edwards joked about how they wouldn’t wear whatever some record company wanted them to. He said they would wear crazy clothes for a photo shoot just for laughs, but not walking down the street and not on stage. “We’re not gonna, `oh yeah, you wear white cuz I’ll wear black, and then…’ Fuck that!”