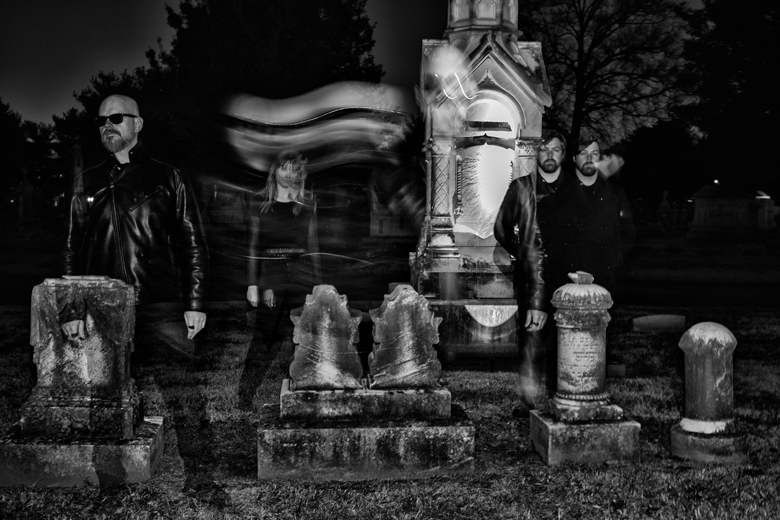 As the frontman of Louisville hardcore outfit Coliseum, Ryan Patterson developed a reputation for playing heavy music often intertwined with some complex, dark overtones. Yet over the course of the band’s dozen years together, that sound began to drift deeper into the aesthetics of gothic rock, post-punk and psychedelia, their more overt hardcore tendencies taking a backseat to more melodic exploration, as evidenced on their final album, 2015’s Anxiety’s Kiss. Yet as Coliseum eventually disbanded, what remained with Patterson was the more textured, subtle and haunting post-punk influences that began to creep into his music.

Those influences have ultimately become the basis of Patterson’s latest project, Fotocrime. Making their debut in 2017 with the Always Hell EP, Fotocrime marks not so much a dramatic shift from Patterson’s former band but rather a more spacious extension of it. There are still elements of heaviness and intensity to Fotocrime’s music, but it’s given a lot of room to breathe. Now expanded to a trio featuring Shelley Anderson and Nick Thieneman, Fotocrime is preparing to release their debut album Principle of Pain this week, which builds on their early EP material with a rich array of hauntingly melodic material that showcases Patterson’s influences from bands such as Killing Joke and The Cure while maintaining a more subdued intensity.

Ahead of the release of Principle of Pain, Treble spoke to Patterson about shedding the mantle of “metal,” toxic masculinity and trying a little tenderness.

With Coliseum, your music started to take on more of a heavy post-punk influence, which is even more explicit with Fotocrime. What drew you toward this musical direction?

I think maybe the melody of music like that. I find myself more drawn generally to melodic music, and Coliseum started off with hints of melody, but mostly kind of in an aggressive hardcore band. And that’s something I’ve always loved as well, but my first love is melodic music. Thats what I started playing as a kid. And I never thought I was very good at it, and never found my voice. So I was drawn to more heavy music and that type of vocal style. But as time went on, I found myself drifting back to melodic tendencies in my songwriting. The type of music that Fotocrime is doing is stuff I grew up on alongside punk and hardcore. I was listening to The Cure and Depeche Mode and stuff like that before I discovered punk. That was all part of the landscape of late ‘80s alternative music, and it was my entrance way to stuff that was more obscure. I can’t say exactly what drew me into it, but the melody and the tone has just always been part of my interests, and I was really fortunate in that I kind of was able to discover punk and its offshoots in a kind of linear fashion. I got into Sex Pistols and Clash and Ramones and The Stooges and early stuff first, and then went along from there. That stuff is all such a part of me, it’s hard to say what drew me to it because it’s been part of my life forever. I also wanted to explore electronic elements more. Sequencing and stuff that I hadn’t been doing as much. I did a little bit in Coliseum, but all of that just led to doing something new.

Were you intentionally distancing yourself from heavier music?

Yeah, I think so, for a couple of reasons. One was that Coliseum was always stuck in a genre that never felt comfortable to me. I think, at least when Coliseum was active, once you got a little bit more well-known and you release an album on a label known for metal, you get called a metal band. Like, any band with heavy guitars is called a metal band. And it’s just not a scene that I connected with, not music I connected with for the most part. I felt really uncomfortable with that tag and being seen that way. So that was something I tried to actively fight against with our music, and when Coliseum ended, I wanted to do something that was not perceived that way. And of course battling with loud riffy guitars, I wanted to sing differently and have songs that were mellow and sparse, things that when you’re in a loud guitar band there’s a little bit of inherent volume with that. Not that Fotocrime is a quiet band, but you’re always battling the intensity of the music for better or for worse. So I wanted to change all that and rewrite the book for myself.

Yeah, I did. I mean, I think time is precious and I don’t like to not be active. It was kind of hard to take a year away from touring and releasing music, and I think 2016 was the only year in—I don’t know—twenty some-odd years when I didn’t release a record or tour. That was hard for me, but I didn’t want to come back with something that wasn’t fully formed or fleshed out and didn’t feel like a work in progress. I wanted to re-emerge, or whatever the term is that’s applicable, with something that’s ready and prepared, so i wanted to take my time. It was good for me on a lot of levels.

Is Fotocrime more of a personal project for you?

How does the title, Principle of Pain tie into the themes of the record?

It’s a line in the first song on the record, “Nadia.” The record was done for a year before we had plans to release it, so I had all these different titles. In iTunes, I have all these different versions of the record with different titles and different sequences. An that one just seemed to stick out, you know, it kind of seemed to be meaningful in some different ways. “Nadia” is about like the old guard of male-dominated power being endlessly…the new guard being like the old guard. New people come in and take over, and they’re failing just as their predecessors did. I don’t know that it’s an apology, but to me it’s kind of an exploration of speaking to women that I know or don’t know, and saying I don’t know why this happens over and over again, but for every promise they make, they end up just like the ones before them. So that line… is kind of about, in context, changing this routine and changing this feeling of pain over and over, and it’s time to lock the door on the past and start over.

Do you see Fotocrime as a response to much of the toxic masculinity in the world?

To a certain extent, yeah. It’s something that I find confusing and frustrating, and as a male who’s a big guy and there’s a perception about me because of my appearance and with Coliseum, a perception about our music, I just don’t like that overbearing intense masculinity. It’s just not something i’m interested in. I’m not interested, like in sports, watching people bashing on each other. And I’m not interested in bro culture. It’s an infection that reaches into people’s brains. It’s not the goal of the band, but it’s part of what the band is about. It’s about tenderness and exploration and artistry and things like that. It’s not about chest beating.

Fotocrime’s “Expulsion From Paradise” is an artfully dark goth clip