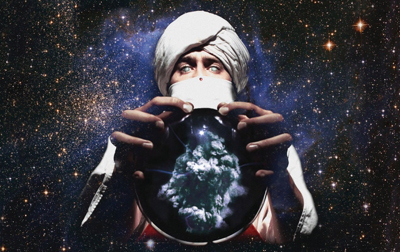 My brother has said on several occasions that his iPod is psychic. It may sound hard to believe, but sometimes, it’s downright eerie. On a recent Facebook shuffle survey, his answers turned up surprisingly apt: his motto was “One Love,” his personality was “Off the Wall,” and his hobby was “Electronic Battle Weapon 06.” To borrow a phrase from Paul Westerberg: color me impressed.

Now, I’ve done my share of Life on Shuffle columns, even an extra long one in the interest of following music’s current into unknown territory. But I’ve never felt fully satisfied with my results. That may sound hypocritical, even stupid: the purpose of the exercise is to accept whatever comes, without judgment, allowing shuffle to do the talking, rather than my own personal biases. Were I to give iTunes a specific task, however, I might receive results with more meaning, something with more weight behind it. So I did: I asked it to predict what to expect in 2009.

Now, I didn’t specify exactly who this applies, to, and for all we know, this could apply to the entire outside world. The country has gone through a significant transition, having inaugurated a new president, one who is left with the bill for an extremely destructive spree, thanks to the prior administration. And this, of course, leaves the public at large in doubt. Suffice to say that 2008 isn’t going to go down in history as one of the best years. And yet, I have reason to feel hopeful about 2009. So the song library accepted the challenge, spitting out answers that, at times, seemed hopeful, at times ominous, and a lot of the time, were just confusing. Nonetheless, here’s my best attempt to read this digital crystal ball.

California positive post-hardcore band Sense Field were often too self-help in their lyrical message, but their overall high energy approach made it easier to overlook. In this case, the leadoff track to their 1996 album Building seems to place the mp3 library as the person asking about one’s fate: “where is anyone, without direction?” And with this exercise, I hope to find that direction, if not my own personal direction, at least some general indication of what lies ahead. Or maybe this means emo is due for a comeback.

As with Sense Field, Jamie Lidell’s offering here serves up even more uncertainty and ambiguity, beginning the soft, understated ballad with the line, “the wind don’t care which way it’s blowing.” At the same time, Mr. Lidell seems to suggest that perhaps it’s time for us to let go of the past, and be ready to accept what the future holds: “when everything is a rope of sand/ we should be learning to let go.”

It’s interesting that The Arcade Fire should pop up, because there’s reason to believe they’ll be quite visible in the year to come. They have a DVD coming out soon, and just recently played several shows for the Obama campaign, and subsequently, his inauguration. And yet, this half-French half-English song is kind of a downer, violent and not the hopeful path that the optimist in me was sure he’d see. But perhaps it’s something like the Death card in a Tarot deck: “soon we will reclaim the earth/ all the tears and all the bodies/ bring about our second birth.” It’s a seemingly grim statement, yet open-ended, and one with a positive turn of phrase. It’s hard not to imagine the doom and gloom of the past year not ending up with a second birth, so to speak, but it remains to be seen, I suppose.

Strategy – “I Have to Do This Thing (Planete Sauvage Mix)”

With the economy and environment in shambles, it’s become quite apparent that people everywhere, America especially, are due to make some sacrifices. Consumption as it is, be it energy or luxury, has spiraled into a dangerous morass of debt and waste. Ergo, `we have to do this thing.’ Even Timberlake says we have to roll up our sleeves. But if we can have a super-cool, ethereal dub track like this to guide us there, all the better.

Rivers, symbolically, tend to signify life and rebirth. Read the Cliff’s Notes on Siddhartha or The Adventures of Huckleberry Finn and you’ll catch my drift. But perhaps this song arises merely to remind us that Ms. Harvey has another album due in the coming months, another collaboration with John Parish along the lines of 1996’s Dance Hall at Louise Point. Can’t wait to hear that one!

Oh, boy. I don’t know what significance this has, but it can’t be good. The song is a masterful piece of art, of course, but beyond disturbing. It’s inspired by 9/11 for one, extremely dissonant for another, and maybe most unsettling of all, features percussion made by Walker punching hanging slabs of meat. I’m not sure I want to think about this one too long. On a musically related note, however, Walker is due to make an appearance on the new Bat for Lashes album, and who knows, maybe he has something else up his sleeve.

The year ahead is bound to have its low points, and slow points, and uneventful periods. So, during those times, we’ll `trod along,’ I suppose, though it’s hard to glean too much information from this one track.

Karate – “The Angels Just Have to Show”

Maybe this is an echo of a sentiment of those who have fallen on hard times. Indeed, many would like to see those angels show their faces at some point. And perhaps they will. Or maybe this song is foreshadowing a resurgence of jazz in indie rock. Seems unlikely, but who knows…

Radio 4 – “Dance to the Underground”

Or maybe dance music will remain dominant in the year to come. In 2008, disco and electronic music in general seemed to dominate the musical landscape. A surprising number of electonic-based acts dominated our songs and albums of the year, and there’s no reason to believe that’s going to stop in 2009. In fact, the first really spectacular album of the year, Animal Collective’s Merriweather Post Pavilion is an even more strongly loop-based work than previous albums. I suspect that no matter what goes down, we’ll still be dancing to the underground.

Hmmm…I’m not sure where to start with this one. I don’t even really know where language city is. Or what it means. But it’s a `bad old place,’ according to Dan Boeckner. So, this could be a vision of something bad to come, or maybe nothing at all. But both Spencer Krug and Dan Boeckner will be releasing music outside of Wolf Parade this year, so maybe that’s the extent of this track’s significance.

However, after the electro-bummer that was 808s and Heartbreak, Kanye’s due for his own return to triumphant, big, life-affirming hip-hop. Graduation left us with a Kanye that, in spite of gripes, still stood larger than life, growing from college dropout to one of the biggest celebrities in the world. And yet, for his fourth album, his approach changed. He sorta went emo. And that’s fine, but Kanye, we need a big, fun, summertime hip-hop record more than ever.

Many have said, since the various events of the past year, that the 21st century finally has begun. How true that is. The century to come may be marked by a greater sense of obligation and watching the big picture than of comfort and selfishness. Maybe not, but that seems to be the direction we’re going at the moment. And as such, we can clearly take a look at the world of yesterday, and recognize what has changed, or at the very least, what needs to change. And, perhaps, that means a new Circulatory System album will finally come out…right, and I bet Jeff Mangum’s all over it too.

On a purely musical level, “Blood Money” is one of the coolest, most intense instrumental rock songs ever. It’s one part My Bloody Valentine and one part DJ Shadow, and maybe the best thing that Primal Scream ever released. So if the year ahed promises more music in this vein, we have a lot to look forward to.

The Long Blondes broke up last year, which was a total bummer. Only two albums and they called it quits, which is especially disconcerting because it seemed like they were just starting to get into their most interesting material. Nonetheless, I get the feeling it’s not the last we’ve heard of these Sheffield punk-popsters, either on an individual basis or in collaboration. I’d wager a guess that at least one member will have something out by the end of the year.

Another track that may give numerous interpretations. Could it refer to conflict in the middle east? Maybe. Could it refer to the rift between the heavily religious and agnostic/atheistic here in the United States? Maybe. Or maybe it’s just a reminder that A.C. Newman, Neko Case and Swan Lake all have albums being released in 2009. I’ll take that one.

Will Oldham, as well, has a new album on the way, titled Beware!, and the exclamation point is a necessary part of the title, for your information. In any case, “Gulf Shores” brings to mind any number of things—the Gulf coast in America, the Persian Gulf—so perhaps my iTunes library is trying to tell me something about New Orleans, oil prices, war, or maybe just a new Bonnie “Prince” Billy album. Probably all of the above, but beyond that it gets a little hazy.

Hmmm…now I’m getting confused. Portishead just released an album last year. In fact, it was our album of the year! But maybe this has nothing to do with music, and more to do with biscuits…mmmm….biscuits.

Now I’m really confused. But I will say this…when I think of the future, I think of drunken robots. Doesn’t everyone?

Alright, well it seems the crystal ball has gone cloudy again, but this piece of classic Tropicalia is a reminder that even in a tumultuous climate, there’s good music to be heard and time to have some fun. And maybe, just maybe, this is an indication that the year will close on an extremely high note. Who knows? In the meantime I’ll take solace in this syllable-divided exercise in Brazilian pop.