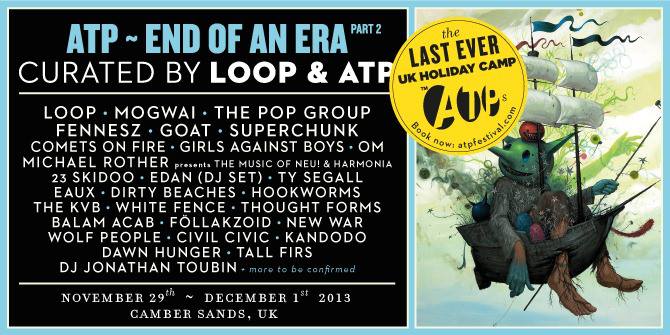 On Nov. 29-Dec. 1, All Tomorrow’s Parties will host its final festival weekend at Pontins Holiday Camp in Camber Sands, UK. The festival began hosting weekend showcases here back in 2001, and it’s been a tradition to have annual, specially curated shows here over the past decade-plus. But as December marks the last time it’ll happen there, the festival is being called “End of an Era.” The final Holiday Camp weekend is curated by heavy psych rockers Loop, and has a sufficiently heavy and psychedelic lineup to match. Loop will be performing, as well as Mogwai, Comets on Fire, Superchunk, Goat, The Pop Group, Fennesz, Girls Against Boys, Om, Michael Rother presents the music of Harmonia and Neu!, Dirty Beaches, 23 Skidoo, White Fence, Kandodo, Hookworms, Ty Segall, Balam Acab, Tall Firs, Wolf People and more.

Full lineup and ticket info can be found here.

It’s worth noting that this will not be the final ATP Festival, but rather the last time one will be held in this venue.