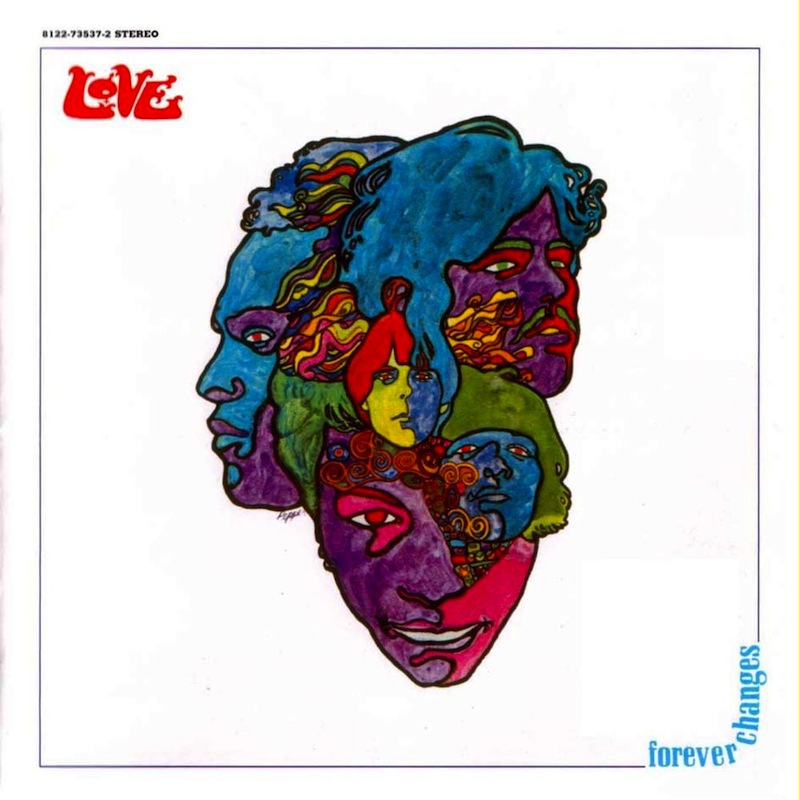 A few hundred miles up the California coast from Los Angeles, the San Francisco / Haight-Ashbury folk-rock music movement, including Jefferson Airplane and the Grateful Dead, was gestating. Meanwhile, back in L.A., even with the presence of the Strawberry Alarm Clock, it wasn’t all incense and peppermints. The drugs were just as free-flowing, but things were taking a bit of a darker turn in the City of Angels, specifically for Arthur Lee. With the band moniker `Love,’ you would think that Lee and company were the embodiment of the sixties, and in a way they were. They espoused aspects of the ‘free love’ movement, but they also reflected the chaos and confusion that led into the end of innocence.

I used to say that Oingo Boingo were the biggest local band in the world. In the mid to late sixties, that distinction belonged to Love. The multi-ethnic L.A. band was big in their hometown, and because they refused to tour, that’s pretty much how they stayed. They released two albums, one self-titled, one called Da Capo, that had little to moderate success. An excess of drugs, infighting, stress, paranoia, and political turmoil were all influences in the band’s now legendary third album, Forever Changes.

Arthur Lee was, and to some extent still is, considered one of the most charismatic and mysterious presences in rock. While his persona among friends and on stage was akin to friend Jimi Hendrix, swaggering and hip, his inner demons were closer to that of Brian Wilson, crippling and debilitating. He rarely went out, viewing life from behind windows or from high remote hilltops, as is evidenced in his lyrics. A great essay on Lee, the making of the album, and views from the entire band can be found in the liner notes of the newly reissued and remastered version of Forever Changes, and since I couldn’t do any better, I will merely point you to that release rather than attempt.

What I will say is that Forever Changes is truly the epitome of cross-cultural Los Angeles. The band featured, at its core, two African-Americans and three Caucasians. It employed the use of Spanish guitar and Tijuana Brass-like horns. From downtown to Hollywood, Olvera Street to the Sunset Strip, Pacific Coast Highway to Mulholland Drive, the band captured the ethnicity, excitement, and sprawl that is Los Angeles. The album is just as relevant today as it was then, and by contrast, more people probably have either heard or own the album today than did then. Listen to the flamenco guitar opening of first track “Alone Again Or” and then listen to the beginning of “Ocean Size” by fellow Angelino band Jane’s Addiction. Influence, anyone? How “Alone Again Or” did not become a huge hit, I don’t know, but even songwriter Bryan MacLean has said, “I still believe that song has yet to be recognized to the extent that it is going to be.” I agree wholeheartedly. The precise guitar work along with the `Herb Alpert’ imitating trumpet solo and the weeping then soaring strings all lend toward a masterpiece of a timeless song. The lyrics, even though written by MacLean instead of Lee, are very similar to Brian Wilson’s, exposing his loneliness.

Lee takes back the reins with the second track, “A House is Not a Motel”. The song is the most straightforward rock on the album, featuring electric guitar and without the violins and horns which seem omnipresent elsewhere. And although the `streets are paved with gold’ in the first two verses, it’s the third verse that delves into Lee’s troubled psyche:

“More confusions, blood transfusions
The news today will be the movies for tomorrow
And the water’s turned to blood
And if you don’t think so, go turn on your tub
And if it’s mixed with mud
You’ll see it turn to gray”

“Andmoreagain” brings the strings back to magic effect during its repeated “Thrum-pum-pum-pum’s” and poignant bridges. Michael Stuart’s drumming also takes a starring role in the song and is noticeably skillful. Listen to the lone guitar parts of “The Daily Planet” and then to the beginning of U2’s “In God’s Country.” Coincidence? Possibly. Or maybe Love’s influence is so widespread and innocuous that even today’s bands aren’t even aware of it. “Old Man,” the only other MacLean penned tune, is one of the few uplifting tunes that exemplify the band’s name.

The eerie “The Red Telephone” follows with Lee’s demons taking center stage. Lee has been quoted as saying that he thought he would die during that time in his life, and he expresses that somewhat in the song:

The psychedelic spoken-word ending is indicative of the turbulent times in Los Angeles and around the world:

“They’re locking them up today
They’re throwing away the key
I wonder who it’ll be tomorrow, you or me?”

It’s fair to say that “The Red Telephone” is the centerpiece of the album. It is morbid to be sure, named after the `crisis telephone’ in the White House and saying that if you’re going to count him, count him out. Despite the grim outlook, Lee is still alive and kicking today and actually performing Forever Changes in its entirety at live performances.

Other songs on the album include a reference to the portion of Sunset Boulevard which houses the Whisky A-Go-Go and the lyric “Served my time / And served it well,” which is now fitting as Lee got hit with California’s `three strikes’ law, serving six years of a twelve year sentence for drug charges and firearm possession. Despite all of the trouble, people still clamor to hear Lee perform old Love songs in concert. Like most of the great albums of the sixties, Forever Changes was underappreciated and misunderstood during its time (except by the Brits), and is now considered a must have classic of a band who performed well before their time. Those who have lived in Los Angeles will find something familiar about Forever Changes, and those who haven’t might enjoy the music, but could probably never understand.