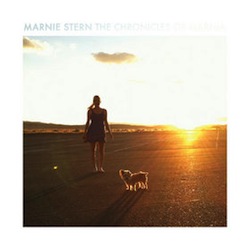 Anxiety is a chief component of Marnie Stern’s music. It’s an inevitable by-product of hyperkinetic guitar wizardry, of which Stern has made an impressive career, and it shows — in her mathematical fretboard sprints that send shockwaves to the central nervous system, or in album titles like This Is It and I Am It and You Are It and So Is That and He Is It and She Is It and It Is It and That Is That. But Stern herself frequently uses her fiery math-rock exercises as a vessel for some often nervous and personal lyrics, from pleading to “Get me out of this prison” on “Plato’s Fucked Up Cave” from 2008’s In Advance of the Broken Arm, or asking “Is there no way out of my mind?” on 2009’s “The Package Is Wrapped.” Some things clearly had been keeping Stern up at night.

For as vulnerable as Stern has sometimes projected herself, it’s hard not to admire her boldness. She’s a great songwriter and a kick-ass musician, of course, but she emanates a kind of fearless positivity that’s easy to get behind. She once set up a kissing booth on tour, sold t-shirts that read “Win ‘Marnie’ Win,” and even held a contest for one lucky gent to win a date with her. Putting yourself out there like that requires not only a healthy level of fearlessness, but optimism to boot. Fittingly, there’s a silver lining that illuminates nearly the whole of Stern’s fourth album, the incredibly titled The Chronicles of Marnia. Things are still topsy-turvy in Stern’s world, and self-doubt crops up, but damn if there isn’t one hell of a bright light at the end of that tunnel.

You could scarcely find a stronger harbinger of hope and brightness than an opener titled “Year of the Glad.” It’s a David Foster Wallace reference, but that’s hardly the point. Backed by a sublime melody, one that aims more for emotional resonance rather than instrumental dazzle, Stern coos, “It’s a special place/ With conviction/ Going to make it work/ On a mission.” She sounds determined — gleeful even! — and in this setting, it’s particularly infectious. But that exposed, vulnerable core is still there, when she laments, “I’m losing hope in my body” on “You Don’t Turn Down,” or in the defeating cry of “I am nothing/ I am no one” on the intense, stunning “Proof of Life.” But Stern isn’t a quitter, dammit, and in the latter, she flips it back to that determined spirit that beamed so brightly earlier, declaring, “I am something/I am someone!”

In describing The Chronicles of Marnia, Stern called it “less nutso,” and the less notable presence of explicit shred lends the album even more warmth and approachability. A key factor in this is new drummer Kid Millions of Oneida, whose playful and limber-armed rhythms leave a lot more space than the head-cracking assault of Zach Hill ever did. The duo have a fluid and easy interplay that’s dynamic on a technical level, but more importantly, just plain sounds wonderful and easy. Stern may sing, “nothing is easy,” on the track of the same name, and doing what she and Millions are doing certainly isn’t, but it definitely feels so in the most satisfying way. Marnie Stern wrote an album about wanting to feel good, but it turns out that was a self-fulfilling wish.

Stream the new Marnie Stern album, The Chronicles of Marnia