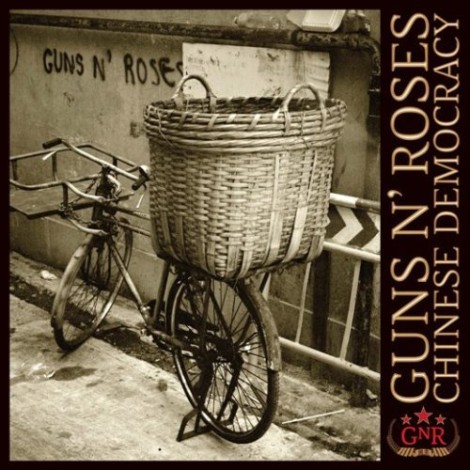 Axl Rose is the very embodiment of drama. In the 25 years since the release of Guns ‘n’ Roses’ debut album Appetite for Destruction, nothing the notoriously ill-tempered and poorly behaved frontman has done came without an ample side helping of sensationalism. One need only look to the various times Rose showed up late to gigs, stopped them early, or, in the case of one fateful 1991 concert, did both, after confronting a fan with a video camera. Add to that Rose’s controversy-laden relationships with supermodel Stephanie Seymour and Erin Everly, both of which involved numerous accusations of abuse on all sides. Oh, and let’s not forget the Charles Manson cover, the racism- and homophobia-filed “One In A Million,” and Rose’s feud of sorts with Kurt Cobain (although, truth be told, some of that was Cobain’s fault).

All these factors taken together are supporting facts in the summary of a figure who has alienated countless people, courted controversy at every turn, and ended up firing half his band or bearing such ill will toward remaining members that they simply left of their own volition. In particular, Slash has been the subject of a great deal of Rose’s animosity, and apparently the hatchet’s still not in the ground: just last week, leading up to the Rock ‘n’ Roll Hall of Fame induction ceremony, Rose sent a letter expressing his desire to have his nomination withdrawn, and the choice not to take part in any activity that would involve bringing all five original members together.

So, basically, he’s an asshole. But lots of rock stars are jerks, and in spite of the numerous awful things that Rose has done over the years, it hasn’t hurt his career all that much. Appetite for Destruction, one of the best selling albums in the history of popular music, sold more than 18 million copies, while the paired Use Your Illusion albums were each certified seven times platinum. Despite the fact that the band essentially dissolved in 1994, with Rose retaining the rights to the name Guns ‘n’ Roses, he could have stayed in hibernation for the rest of his life. Few musicians will ever see anywhere near that kind of money in their lifetimes.

Rose didn’t hibernate, though. While the band essentially ceased to exist, Rose continued to write songs, some of which date back to the ’90s, and the first taste of new material, “Madagascar,” being performed in 2002 at the MTV Video Music Awards with a new Guns ‘n’ Roses lineup, featuring goofball avant-guitarist Buckethead, Replacements bassist Tommy Stinson, Nine Inch Nails touring guitarist Robin Finck, and drummer Bryan Mantia. While I was in college at the time, I wasn’t able to watch the performance, for want of a cable connection. But the general consensus the next morning among friends was loud and clear: “What the Fuck.” And not in any demonstrably good sense of the phrase.

It would be another six years, however, before Guns ‘n’ Roses’ sixth album, Chinese Democracy, would actually materialize. By that point, its delay had become something of a running joke. In March 2008, Dr. Pepper began a promotion in which they would give a free can of Dr. Pepper to everyone in North America if Guns ‘n’ Roses actually ended up releasing the album in 2008. It arrived in November, and the vouchers were distributed accordingly. We all had a good laugh, and for fans that had been waiting a solid 15 years since the band’s last album, the all-covers album The Spaghetti Incident?, what seemed like a foregone conclusion never to happen somehow, despite arrogance, animosity and perfectionism (from Rose’s perspective anyhow), finally did. Too bad an album that cost $13 million to record and 15 years to finish wasn’t all that good.

It’s probably around here where I should state that I’ve never been a GNR devotee like a fairly good chunk of the United States between 1987 and 1993 was. That said, Appetite was pretty killer, and made hard rock edgier and more interesting than it had been for much of the ’80s. It’s heralded as a masterpiece and sold 17 million copies for a reason: it rocks like few bands in history ever did. And even when thrash metal had already become the go-to alternative to Sunset Strip glam metal, GNR somehow came out sounding tougher than them all. So, how did a band that once dominated mainstream rock end up losing the plot, and in turn issuing a monument of excess and egotism no price tag could ever justify? Look no further than the man in the driver’s seat, one Axl Rose.

The eight-figure price tag attached to Chinese Democracy supposedly made it the most expensive album ever made (it actually isn’t — Michael Jackson’s Invincible cost twice as much), and the sheer amount of time it took to record probably meant that studio time alone cost a few mil. But Rose would have been better advised to allocate a few hundred more to remove or update the distracting and painfully dated electronic sounds that spring up in some of the album’s louder moments. On “Shackler’s Revenge” and “Better,” I can’t tell if I’m listening to Guns ‘n’ Roses or Static-X. By the time this was released, nu-metal was already more than a decade old, so I suppose it’s only fitting that an album more than 10 years late have reference points that were likewise stuck in an era the better of us long to forget. And if Rose had so much cash at his disposal, why didn’t he hire some actual brass musicians instead of resorting to chintzy Midi samples on “Madagascar”?

Rose is a complicated fellow, however, one just as likely to take to a tender ballad as he is to an overblown, crunchy rock song. “Street of Dreams” is the first such track, driven by ornate touches of piano a la “November Rain,” but made simply ridiculous by Rose’s vocals, which approximate an old man wheezing through Auto-tune. Slightly more successful is “Sorry,” slightly being the operative word here. Atmospherically speaking, it has a doom metal style about it, but is marred by Rose’s lyrics, which are as arrogantly laughable as always (choice couplet: “Just close your eyes, all well and good/ I’ll kick your ass like I said that I would.“).

Not everything on Chinese Democracy crashes and burns so hard. The opening title track, while a bit generic, is a perfectly salvageable hard rocker, and one that at least gives the listener some level of excitement about diving into this monstrosity. “I.R.S.”, as well, is a fun one, burning through some much-needed power chord crunch, bringing to mind the good ol’ days when Guns ‘n’ Roses songs actually had some life to them. The lyrics here are truly abysmal as well, but dumb in a completely forgivable way. And “Madagascar,” barring the cringe-worthy Midi horns might also have been decent, but the sheer hubris on Rose’s part of tossing Martin Luther King Jr.’s “I Have a Dream” speech into its bridge is kind of insane.

There are numerous sins throughout Chinese Democracy. It’s bloated, for one, unnecessarily stacked to 71 minutes in length, despite most of them being aimless or tunefully hollow. And for just how much time and effort supposedly went into this thing, it somehow suffers pretty heavily under the weight of production techniques that would have sounded painfully dated ten years ago. Couple that with Rose’s inexplicable need to pack his songs with confrontational lyrics that, while much more radio-friendly and mellowed out than in 1992, just make him sound like a jerk. None of these are helping Chinese Democracy in the slightest.

Yet the biggest sin of all is just how directionless it seems. It’s a huge record, but it’s overcrowded. The unlimited resources at Rose’s disposal were more of a liability in the long run, because he apparently never knew when to stop. Every song has a solo, and likewise some kind of atmospheric intro, whether called for or not. And though Rose’s intent most likely was to tap into some soul-baring place of emotion and sincerity, he very rarely seems to say anything at all. Even his threats to kick my ass (or Slash’s, I guess) seem entirely unwarranted.

Chinese Democracy was supposed to be an important album. But time, money and suspense alone can’t make something good. I’m not sure if Rose ever stepped back from the recording sessions to evaluate with a clear head whether or not the album really needed all of the crap he and his team loaded into each song. And there’s a definite forest-for-the-trees problem going on. It’s a massive record, one that only $13 million and an ego for the ages could have created. But for how overwhelming it is, and packed to the sky with detail and production flourishes, I left the album with hardly any reason to want to revisit it again. And thus the real tragedy of Axl Rose is that for someone who made a career as a provocateur, offending, shocking and dazzling in equal measure, in the end became rather boring.