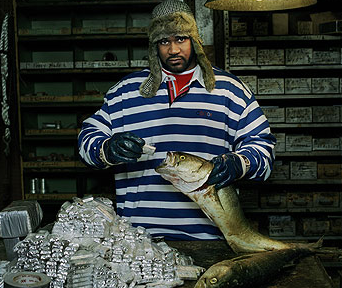 The decade has almost come to an end. And of course, you know what that means—lists, `best ofs’ and all kinds of general retrospective features and columns. Treble is no exception, hard at work on figuring out the best albums and singles of the past nine years. Yet, before we get into albums and singles, we’re taking a look at the best non-single tracks to emerge since the Y2K scare proved to be a non-event. Every week we’ll be highlighting a handful of our favorite tracks of the decade, so keep checking back to hear about what songs remained on repeat on our iPods, CD players, tape decks and turntables since Jan. 1, 2000.

Ghostface Killah and MF Doom have collaborated on numerous occasions. They traded verses on the standout track “The Mask” from DangerDoom’s The Mouse and the Mask. And somewhere on the horizon, the duo’s full-length collaborative effort Swift and Changeable will finally see the light of day. Until that comes, however, “Underwater,” the surreal two-minute jam from Fishscale, stands as Ghost and Doom’s most impressive tag-team match to date.

While Doom doesn’t throw down any lyrics on “Underwater,” his production is what makes the track. Psychedelic flute samples lay down a bed of aqueous sonic bliss that’s at once bizarre and alluring. What’s most intriguing about it is that it actually sounds like it’s underwater. Not in a literal sense (other than the splashing samples), but when those trippy beats flow, you can’t help but get the feeling that you’re submerged in some kind of oddball oceanic den.

In contrast to Ghostface’s dadaist, stream-of-consciousness free association on Supreme Clientele, or his gritty, coke-rap on about half of Fishscale, “Underwater” finds Tony Starks, a.k.a. Dennis Coles, a.k.a. Ghostface dropping surrealist, almost cartoon-like descriptions of whimsical scenes, ranging from “Mermaids with Halle Berry haircuts” to “Spongebob in a Bentley coupe.” In Ghost’s world, of course, Spongebob is bumping the Isley Brothers.

And somehow, it all ends in “the world’s banginest mosque.”