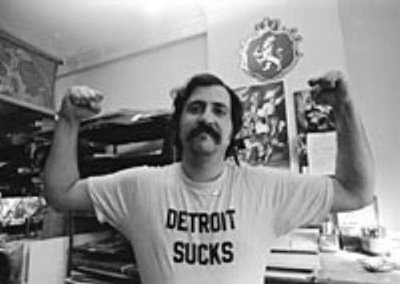 One thing I love almost as much as I love music is reading about music (If that’s not obvious already from the fact that I am devoting a lot of time to this website). The most difficult thing about any writer’s life is reading other people’s stuff and feeling rather inadequate. I’d be the first one to admit that I’m no Lester Bangs or Greil Marcus, but nor do I wish to be. All I can hope is to maintain my own voice, express my own opinions thoughtfully and in an articulate manner, and to be somewhat entertaining in the process.

Whereas Messrs Bangs and Marcus leave me in awe, leading me to believe that the world of music writing is an extremely exclusive one, complete with a lexicon of its own, two new books do the complete opposite. One is a longish essay of sorts by a writer who has definitely found his own voice, is not afraid to reveal personal foibles, feelings or flaws (and frankly those of his friends, who I’m sure might be pissed), all the while revealing his love of all types of music regardless of how cool or uncool it might be. The second is a passkey into the world of the music elite, a Cliff’s Notes or cheat sheet, if you will, of the world of rock.

Chuck Klosterman is no longer a secret in the music world. He once might have been, a heavy metal fan growing up in North Dakota, but his meteoric rise as a writer for The New York Times Magazine, Esquire, GQ, and most recently and famously at SPIN magazine changed all that. His third book, Killing Yourself to Live: 85% of a True Story, is a magnificent autobiographical novel in the guise of an essay on death as the ultimate factor of fame in the music biz. The premise is simple; Klosterman is given a nebulous assignment of an epic search of rock and roll in America. He turns it into something he’s really obsessed about, death. The back jacket describes his curiosity thusly, “He wanted to know why the greatest career move any musician can make is to stop breathing.” Starting with the New York Chelsea Hotel room where Sid Vicious allegedly killed his girlfriend Nancy, Klosterman goes on a 21 day journey to visit sites of rock deaths. Included in his tour are the Rhode Island club where Great White’s pyrotechnics backfired and killed 100 fans, the Georgia road where Duane Allman crashed his motorcycle, the Mississippi wilderness where Lynyrd Skynryd’s plane went down, the crossroads where Robert Johnson sold his soul to the devil, and the former greenhouse where Kurt Cobain swallowed a shotgun blast. These sites and this framework are mostly window dressing, as the book really revolves around Klosterman, fears of his own mortality, and his female troubles. Sound like High Fidelity? Indeed, Klosterman even acknowledges that likeness in an extremely hyper-self-aware, referential, postmodern kind of way.

Probably the most entertaining parts of Killing Yourself to Live are his various asides on music, mostly revolving around the 600 CDs that he brought along for the ride. Passages about KISS, Radiohead and everything in between dot the landscape of the trek, making the book seem like something that people like me love, an intimate conversation about music and what we love about it. One revelatory piece involves Klosterman discussing Fleetwood Mac’s Rumours, its popularity, and its storied recording. He alludes to a conversation he had with a friend in which they discuss the idea that Lindsey Buckingham must be some kind of asshole to make his ex-girlfriend sing backup on a song that bashes her. He also writes about one inherent flaw in the record, during the first five seconds of “I Don’t Want to Know.” He discusses the flaw with Jeff Tweedy who was giddy about the revelation. Tweedy says, “the one moment off Rumours that was most important to you and your friend is a little crack he couldn’t spackle over. Nobody can control anything, really.” What makes this more stunning is the fact that Tweedy checked into rehab the very next day. It is this type of arcana, this type of insight into the world of music that you just can’t get anywhere else. After all, what most of us want to do is to talk to our heroes about music. Klosterman does that and shares it with us, bringing all of us into his world, full of secrets, passwords, and references that make us feel like we have joined an exclusive club.

That’s where the second book comes in. Steven Daly, the former drummer for Scottish band Orange Juice, and David Kamp, an editor at Vanity Fair, have created the ultimate reference for people wanting to pass themselves off as music elitists, The Rock Snob’s Dictionary: An Essential Lexicon of Rockological Knowledge. What is a rock snob? The book defines it as “the sort of pop connoisseur for whom the actual enjoyment of music is but a side dish to the accumulation of arcane knowledge about it.” The book acts as an actual dictionary reference, citing rock definitions from `acetate’ to `Zoso,’ complete with capital lettered words for cross-references and an icon of a 45 rpm record adapter (you know, the one that used to be SPIN‘s logo) to indicate something that rock snobs hold sacred (i.e. the Rickenbacker guitar and Nick Drake entries). The book even tells you, if you want to be cool, what to call Bob Dylan and Iggy Pop (Zimmy and Jim, respectively). Want to know what Beatles song is cool for rock snob’s to like? This book will tell you. In especially helpful interspersed columns, the duo let you know about particularly relevant information, such as being able to tell apart all the Van Zan(d)ts, what rock films you must see (or at least claim to have seen), and the Godfather Guide, a list of the true pioneers of funk, grunge, hip-hop, metal, punk and soul. I must admit that after looking through this book, I felt shamed that I didn’t know most of what a rock snob should know, especially after being called one for most of my life. For every Eno, Hammond Organ and John Peel that I could claim as my own, there was a Nanker Phelge, Neumann U47, and Klaatu that escaped my snobbery past.

Ultimately, I love reading anything about music, from biographies to simple references, but these two easily digestible books are among the Truly Great. You can rest easy as they sit on your shelves alongside your copies of High Fidelity, Charles Mingus’ Beneath the Underdog, and Lester Bangs’ Psychotic Reactions and Carburetor Dung. For those who are already rock snobs, both books act as validation, and as a welcome self-examination. For those who might not be as knowledgeable, they represent an entertaining look into the peephole that is their (our) world. Just when you thought that the music was everything, Chuck, David and Steven prove that paper beats rock, at least every once in a while.