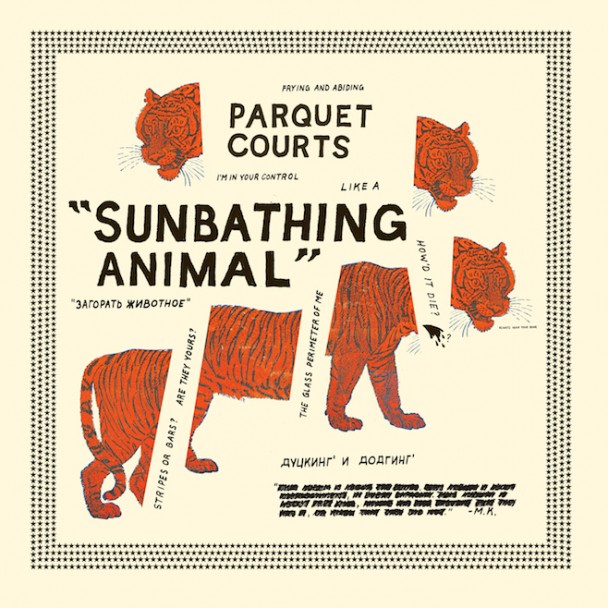 Historically, the best punk songs have always done a lot with a little; that’s the essence of Wire’s master’s thesis in “less is more,” 1977’s Pink Flag. It was already apparent enough on Parquet Courts’ debut album Light Up Gold that the Brooklyn by way of Texas group had spent a lot of time with that landmark minimalist punk album — in addition to similarly influential records by The Feelies, The Fall, The Minutemen and Velvet Underground. Yet, as Parquet Courts progress as a band, the abrasive edge of punk has increasingly become a more crucial element to sound — perhaps even more so than its economy or attitude. No song of theirs had so explicitly referenced early ’80s hardcore as their recently released single “Sunbathing Animal,” from the band’s forthcoming album of the same name. And there’s a similarly raw and cutting aesthetic to “Black and White,” off that same album.

Boasting a jagged two-chord hook and a streamlined, descending bassline, “Black and White” is pretty simple when you get right down to it. It doesn’t just reference the bullshit-free essence of Wire’s debut album, it actually kind of sounds a little like that album’s standout track “Champs,” especially when the handclaps begin. But it doesn’t stay that way; a little under two minutes in, the band launches straightaway into a noisy duel of back-feeding guitars, bizarre effects and punk rock guitar heroism. But even when indulging in noisy squalls and solos, Parquet Courts still keeps a streamlined approach, cutting off the squeaks and squonks early and getting right back into the broken-glass groove they carve out at the beginning of the song. The whole thing wraps up in three minutes, but it feels like a lot less than that. If they hammered out that hook for another two or three minutes, it still might not seem like enough.

[from Sunbathing Animal, out June 3; What’s Your Rupture/Mom+Pop (pre-order)]