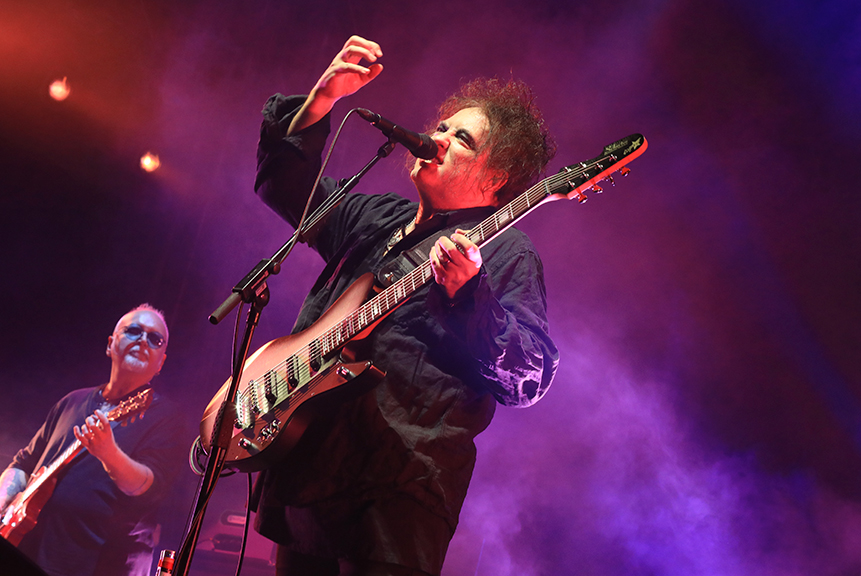 Seeing The Cure live is a goth rite of passage. There’s a reason why, after 40 years, their live shows are bootlegged extensively, their tour setlists are meticulously chronicled and they can still draw tens of thousands to a Pasadena golf course in 95-degree heat in August. Few bands to have emerged during the post-punk heyday of the early 1980s have been as successful at making dark, arty rock music as accessible on as wide a scale. Only U2 and Depeche Mode can boast a similar ascent and enduring level of appeal while continuing to perform for four decades, but theirs is broader, steeped in rock star pomp and circumstance. The Cure, however, became icons without ever seeming to have been reaching for it. Their biggest album wrapped pop hits in seven- and eight-minute dirges of ethereal gloom and gothic grandeur, and for writing some of the best songs of the past four decades and cultivating an entire aesthetic that generations of goths would adopt as their own, Robert Smith never seemed all that interested in being a rock star—watch his reaction to an upbeat TV host about being inducted into the Rock and Roll Hall of Fame for the proof.

During the band’s headlining set Pasadena Daydream, a daylong festival curated by Smith, one of his few bits of stage banter included a remark about how he had no idea how everyone was feeling (despite a level of applause that roared nearly as loud as set opener “Plainsong”). “I don’t even know how I’m doing right now, so how are you—I mean, what the fuck?” he said with a sheepish grin. But for all his seeming reluctance at playing the role, Robert Smith has made his career out of putting on a great show, and at this 10-band one-time celebration on an encore year of 40th anniversary concerts, he and his band did so in good company. Some of those bands emerged just as The Cure were becoming household names (The Pixies, Throwing Muses), and some are the disciples of The Cure’s exquisite post-punk and romantic pop (Chelsea Wolfe, Emma Ruth Rundle). But what Pasadena Daydream seemed to represent more than anything was how far and deep the band’s influence has spread, coupled with the fact that Robert Smith has better taste than the algorithms and Spotify stream statistics that mostly determine festival lineups in 2019.

As godfathers of goth, The Cure’s marquee billing drew thousands of pale attendees clad exclusive in black, few of whom looked safe in direct sunlight—frankly nobody did. Having taken place during one of the hottest days of the summer made for a strange and surreal atmosphere for a batch of bands that, with rare exception (maybe The Pixies), would rarely make anyone’s summer jams playlist. But then again there were plenty of Lydia Deetz-style large-brimmed hats floating around (those people were smarter than me), and the shade from the Willow stage made for a refreshing break from the heatwave just as Icelandic darkwave trio Kælan Mikla kicked off the fest. Opening with the lighting of incense and the ringing of a bell, the Nordic group seemed to invite the spirits to come out as they made their way through highlights from 2018 album Nótt eftir nótt. Stripped-down but ominous, danceable but sinister, the band’s music evoked the menacing pulse of 1982’s Pornography, an interesting irony given that they were the youngest musicians at the fest, but by all means one of the low-key best.

The two stages on the Brookside Park grounds separated the bigger names and bombastic performers from the more indie acts, which ensured the right vibe: The less stadium-prone acts weren’t consumed by a too-massive stage, and the acts that would be headliners under any other circumstances wouldn’t underwhelm. Which isn’t to say that a few hiccups didn’t happen here and there—The Twilight Sad‘s otherwise outstanding performance on The Oaks stage suffered from the sound dropping out a couple times, and Throwing Muses likewise dealt with a brief sound hiccup. Yet with those issues ironed out reasonably quickly, the flow and timing worked better than the average fest—no sets overlapped, making it not only possible but realistic to see every performance, and the lack of sound bleed meant that the thunderous post-rock of Mogwai wouldn’t drown out the dreamy indie rock of Emma Ruth Rundle, whose more intimate and enchanting presence was given the time and space it deserved.

Given that this was The Cure’s show and featured only nine other bands total, the likelihood of other ringers on the lineup might have seemed unlikely. But the openers—if such a term can be applied to bands as big as Deftones, hosting their own similar festival in a couple months—more than held their own. Chelsea Wolfe played the best set I’ve ever seen her play, which says a lot since I’ve seen her five times. Though she has an acoustic-heavy album on the way in just two weeks, instead she and her band focused on the heavier, doom-centric tracks of recent albums Hiss Spun and Abyss, her mesmerizing vocals mixed loud enough to break through the fuzz. And Deftones, whose own legacy is nearing a quarter-century, remain as heavy yet melodically complex as ever. Opening with their two singles from 1997’s Around the Fur, “Be Quiet and Drive (Far Away)” and “My Own Summer (Shove It)”, the band set off the fireworks early before a setlist of standouts ranging from some of The White Pony‘s best tracks to the moodier pieces from 2012’s Koi No Yokan. And The Pixies, despite having just over and hour to play, packed nearly as many songs into their set as The Cure did, sprinkling choice cuts from throughout their career—no banter, no bullshit. Just rock music (and “Rock Music”).

But the best and most obvious reason to be there was The Cure. It’s why I was there—somehow despite marrying a Cure fan who’s seen them twice and a handful of opportunities to do so over the past 19 years, I’ve never come face to face with Robert Smith and company. Two of my friends even chastised me recently when they learned I didn’t cancel a DJ gig to see them at their last San Diego performance in 2016. So on a personal level, this concert was a long time coming. And they delivered.

Following a handful of Australian performances of the entirety of 1989’s Disintegration, which turned 30 this spring, The Cure heavily featured many of the highlights from the album throughout their set. They emerged from a thick fog to make a grandiose introduction with album opener “Plainsong,” caused widespread singalongs with “Lovesong” and “Pictures of You,” and sounded their most badass when pulsing through “Fascination Street” and “Disintegration.” The only tracks they didn’t play from the album were the ones you probably wouldn’t expect them to (“Untitled,” “The Same Deep Water As You,” etc.), though they made up for that with a handful of well-selected deep cuts, both left field (“39,” “Just One Kiss,” The Crow‘s “Burn”), and proven throughout hundreds of live shows (“Push,” “From the Edge of the Deep Green Sea,” “Shake Dog Shake”).

The second memorable moment of stage banter from the fairly reserved Smith occurred at the beginning of their seven-song encore, which kicked off just shy of the two-hour mark. “Thirty minutes of popular music,” he declared, and that’s what they gave us: “Friday I’m In Love” (mixed with a bar of Pixies’ “Where Is My Mind?”), “Why Can’t I Be You?”, “The Walk” and “Boys Don’t Cry” among the parade of hits. Which naturally led to the revelation that, for a band who speaks so directly to those that most pop music doesn’t or can’t, they have a lot of hits! All of which retain their charm and appeal. Though it was still the moments like “Disintegration”‘s eight minutes of dark, dreamy sprawl or “Push”‘s melodic transcendence that made the evening memorable.

The Cure have been at it long enough to know that the hits will always go over well, but it’s the unexpected cult favorites that make the difference between a good show and a great one. Though the band itself deserves a lot of the credit, from Simon Gallup’s distinctive and heavy bass playing to recently added member Reeves Gabrels’ stadium-worthy guitar techniques, not to mention Smith’s own choreographed movements and voice, which doesn’t sound as if it’s aged a day since his first visit to Fascination Street. The Cure don’t shy away from surprises or spontaneity, but they don’t shoot from the hip either. It’s why Smith, for all of his indications otherwise, most certainly is a rock star. But the bigger takeaway from Pasadena Daydream came from something I heard second-hand about what Smith was up to before his own band took the stage. Apparently he watched every other band’s set throughout the day, every bit the voracious listener as the rest of us. It’s a cliché to say so, perhaps, but it seems he’s a lot more like the rest of us than you’d think.