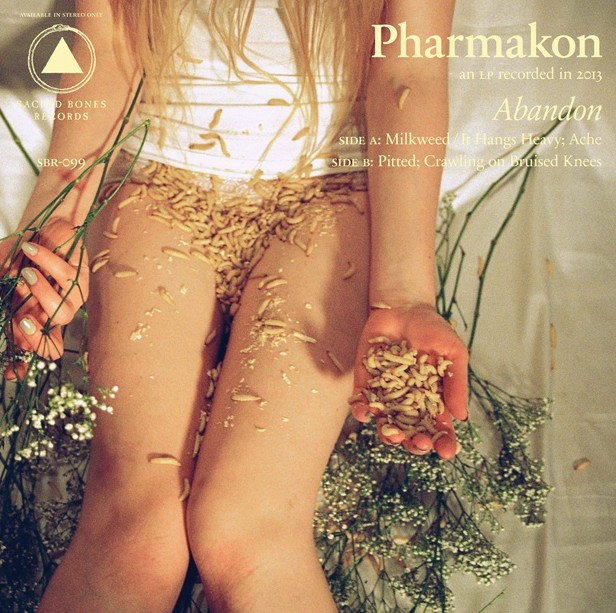 Just as spring is starting to rear its head, thawing the frost and beckoning youth to bask in the radiant glow of a benevolent sun, noise and dark ambient’s most fucked-up creatures appear to be mobilizing, as if to fight off any kind of environment in which joy can thrive. Not that they aren’t doing so in an absolutely stunning way. The Haxan Cloak, while about six months late for Halloween, has his sights set on letting hobgoblins loose in the off-season. Yet Pharmakon, aka 22-year-old Brooklyn noise architect Margaret Chardiet, has an even more destructive sensibility, with an aesthetic that feels much more dangerous than any other music right now, even at its least outwardly chaotic.

“Crawling On Bruised Knees” is the final track on Pharmakon’s new album on Sacred Bones, Abandon, yet the first to be unveiled, and it’s tense to the point of sheer terror. Percussion crashes slowly, ominously laying a foundation for the buzzing synths that Chardiet layers. At times they sound like helicopters buzzing overhead; in other instances, the chilling purr of a sleeping beast. Once Chardiet’s own effects-mangled voice arrives, the song has reached maximal intensity, her presence undercutting it with just a trace of humanity, despite being nearly unrecognizable from any human form. Given that Chardiet is capable of even louder, more viscerally raw creations, “Crawling On Bruised Knees” is far from psychological warfare. It’s just terrifying in the most aesthetically pleasing way.

[found on Abandon, Sacred Bones; out May 14]