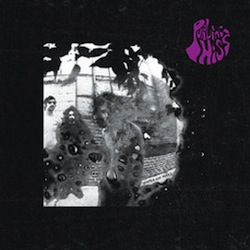 Philadelphia’s Purling Hiss know a thing or two about making noise. It’s less Merzbow noise or even Sonic Youth noise than merely good, old-fashioned rock ‘n’ roll-turned-way-louder noise — which shouldn’t be all that surprising given the band’s connections to Kurt Vile and The War on Drugs — but it’s still piercing and intense. On their records, Purling Hiss are plenty loud, but onstage they can turn a groovy rock jam into a menacing assault. There are some catchy, classic rock tunes underneath the squalls of feedback and oppressive distortion, sure, but it’s the aggressive nature of Mike Polizze’s heavy sonics that leave the largest impact.

Whether or not noise was ever intended to be the primary focus of Purling Hiss’ approach, it’s been dialed back a bit on Water on Mars, the band’s first full-length for Drag City.  Not dramatically so — Polizze’s expertise is in endearingly trashy noise-rock after all, and he’s cranked up the fuzz on his Big Muff throughout at least half of Water for Mars’ tracks. But where in the past Polizze might have been perfectly comfortable with allowing the noise to smother his tuneful hooks and bright choruses, here, there’s a more concentrated effort on letting them breathe, out in the open, unobscured by crippling, overbearing effects.

That’s not necessarily so apparent at first; opening track “Lolita” is just the kind of churning, grungy garage rocker that Polizze’s written in the past, borrowing equally from The Stooges with its dense proto-punk sound and Bowie, with its “Suffragette City”-style “hey man” refrain. But track two, “Mercury Retrograde,” is the spot where the band’s intentions grow a little more pop-pure. There’s squealing riffs and a little bit of fuzz, but within just a few seconds of its opening buzz, it turns to jangly power-pop sweetness, Polizze singing along with his riffs and muttering bummed-out laments like “I don’t know, I don’t know/And we can’t do anything.” Prettier still is “The Harrowing Wind,” with Polizze’s falsetto “doo-doo-doo” chants and lite psychedelic verses. Even a scuzzy rocker like “Rat Race” is more melody than murk.

It’s not until the penultimate title track that Purling Hiss feel the need to let the feedback fly, but once it does, it comes as a climactic capper to what is an otherwise quite approachable rock ‘n’ roll record. Purling Hiss’ style of trashy, squealing rock music is a pretty fine thing in itself, but even more impressive than that, it turns out, is how nicely they clean up.