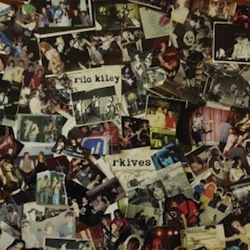 Rilo Kiley always seemed too good to be true. Full of eccentric indie pop hooks, mild electronic flourishes and singer Jenny Lewis’ sultry but down to earth storytelling, Rilo Kiley truly were an indie rock juggernaut. But in 2010, the band announced they were going on hiatus, which ultimately turned out to be more permanent than expected. Now, five years after the release of their last album Under The Blacklight, Rilo Kiley offer the closest thing to something new with a collection of B-sides and unreleased material titled RKives.

The journey through the Rilo Kiley vaults begins with the laid back “Let Me Back In,” which features sparse but beautiful instrumentation and Lewis purring, “I’m sorry for leaving,” ironically, making it sound like an apology to Rilo Kiley fans for taking off in the first place. The song is easily the most enjoyable cut on the otherwise underwhelming collection and the only song where the band sounds sincere. Elements of what made the group so fantastic originally are present, but they are scattered about the record with such inefficiency that it never really gels into a cohesive listening experience. Jangly indie pop is represented with “All the Drugs” “Patiently” and “It’ll Get You There” but the songs are executed with an indifference that has never permeated the past works of Rilo Kiley to this degree. “A Town Called Luckey” showcases Lewis’ penchant for telling a good story, but the anguished screams towards the end of the song leave it feeling like a bad ending to an otherwise great book.

The band churns out the bluegrass tinged “Bury Bury Bury Another” which would stand out in the current indie rock landscape but unfortunately, will likely never be fully realized due to its surroundings. However, not everything on RKives is a mess. The demo version of “Rest of My Life” from 2001’s Take Offs and Landings, offers an intimate glimpse into the creative cycle of the group when they still functioned together. Also, a remix of “Dejalo” originally found on Under The Blacklight, features rapper Too $hort and an infectious dancefloor friendly club beat. It may not be the Rilo Kiley you remember, but unlike the majority of RKives, at least it’s memorable.

Releasing an album of unheard and rare material is a risky proposition and RKives is no exception. It will surely please fans of the band that crave one last lingering taste, but the album certainly won’t win over any new converts, as the material is too scattered and too inconsistent to really be enjoyable as a whole. Longtime fans waiting for new material or a reunion from Rilo Kiley shouldn’t hold their breath, as RKives sounds like the last gasp of life from a once great group.

Rilo Kiley- Under The Blacklight

Tegan and Sara- The Con

Remake/Remodel: Rilo Kiley – Under the Blacklight

The Music of Buffy The Vampire Slayer