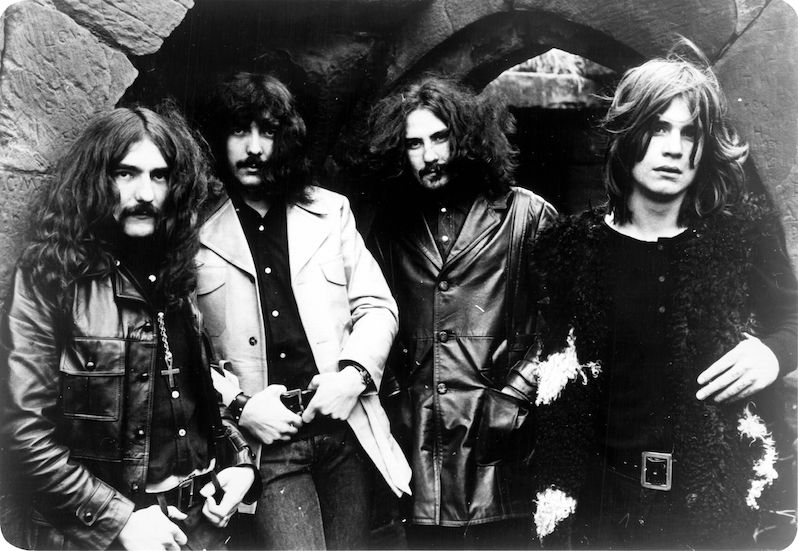 Metal is officially 50. It feels weird to acknowledge, and though I myself still have some years to go before I get there, serves as a reminder that all which is dangerous and rebellious will someday, too, grow old and start watching reruns of NCIS for hours at a time. It’ll happen to you!

All joking aside, it’s an important landmark for metal—at the beginning of 1970, Black Sabbath released their debut album into the world, kicking off with a supremely sinister tritone that ultimately came to define an entire genre of music. The song “Black Sabbath” may or may not have been the first song to be called “heavy metal”; depending on who you ask it could have been Blue Cheer’s “Summertime Blues” or even The Beatles’ “Helter Skelter.” But “Black Sabbath,” along with the other six tracks on the band’s debut, is essentially the source from which all heavy metal flows.

“Black Sabbath” didn’t just create a sound, however, it established the basic unit by which all metal music is measured: The riff. You don’t have a great metal song without a great riff, and as much as the “it’s about the riffs, bro” dudes deserve a good clowning when they defend indefensible artists, well, you still do need a good riff. And how does one define a good riff? Good question! Part of it is the sound—in black metal it’s in the tremolo picking perhaps, in death metal it’s in the clang of a dissonant chord. Part of it is what it seeks to accomplish. Maybe it’s a catchy melody, as many of Sabbath’s best riffs were, or perhaps it’s a means of establishing a mood or atmosphere. Or perhaps it’s just a happy accident, a thing that sounded cool that ended up getting stitched between some other parts.

As I ponder these things, I got to thinking about the heaviest, most badass riffs that I always come back to. The ones I feel like playing when I pick up a guitar (or air guitar, because they rule). So as we raise a glass to 50 years of metal, here are 10 riffs that merit your hails and horns.

Just because you’ve heard it a million times, and just because every high schooler at Guitar Center is playing it all the time doesn’t mean it doesn’t rule. Because it does. You can thank the late Randy Rhoads for this one.

Wade your way through the Channel in the early ’80s and late ’70s, and you’ll find that there’s no shortage of great guitar work happening in the New Wave of British Heavy Metal’s best bands. While I’m still waiting for a reissue of Diamond Head’s Lightning to the Nations with cover art that doesn’t look goofy as hell, I’ll still always feel like doing some guitar-neck choreography when I hear this absolute ripper.

As someone who plays guitar but was always lazy about practicing scales and the like, I’m here to admit: My hands don’t move this fast. I’d like them to, I’d feel superhuman if they did, but I’m not sure I have the time or discipline to make that happen. So instead I’ll just live vicariously through this godlike moment of technical thrash.

I like plenty of technically proficient death metal—I’m not a djent guy or anything, but part of the fun of listening to metal is hearing bands that can do things you can’t (see above). That most people can’t, really, because they’re hopelessly committed to insane feats of human performance. It’s a hell of a thing to behold. But, well, sometimes a raw, messy, knuckle-dragging OSDM riff with swing will do just fine, and that’s what we have here.

One of my biggest regrets from last year is not getting around to writing an essay for the 25th anniversary of Superunknown, one of my favorite albums from 1994 and an extremely important one in terms of me appreciating heavy music. Though less overtly metal than its predecessor, 1991’s Badmotorfinger, the album was long on incredible deep cuts. And the riff to “4th of July,” despite coming from a band that was considered “alternative,” remains one of the heaviest things I’ve ever heard.

The thing about Kyuss’ desert stoner-metal is that it had groove. It had boogie. Blues was central to their sound, just as it’s foundational to all heavy metal to a degree, but paired with overbearing fuzz, it’s a combination that adds up to some killer riffs. Like this one, easily their catchiest.

The thing about Helmet is that Page Hamilton’s guitar playing is often pretty minimal—drop-D power chord riffs for the most part, applied liberally and played loud. But every now and then he throws in a riff that just slices right through the beef. “Blacktop” is one of the few early Helmet songs—during a period when they were arguably more noise rock than anything—that has a legit metal riff, and it’s a ripper.

Electric Wizard skeptics might sometimes dismiss Dopethrone as earning its reputation solely on tone. And sure, that tone is nasty. I feel like I have to cough just listening to it. I don’t know what the bearded dude on the cover is smoking, but I’d advise novices to save their lungs. But the songs themselves are great, and the opening riff to “Vinium Sabbathi” takes doom metal’s blues roots and makes them sound absolutely lethal.

Between the first three Mastodon albums there’s enough guitar wizardry to fill a few more of these lists, but this galloping opening riff is an all-timer, shuffling its way toward the peak of Blood Mountain with defiance and majesty. The fact that the band is just as strong with hooks as they are with slinging sludge is what made them heavy metal heroes.

The best metal tracks of February 2020

Know how many bands there have been over the years that called themselves “Plague”? Around two-dozen based on my Internet research, plus about another dozen called “The Plague,” and that’s not even counting the probably countless others that never actually put out any records. But hey, if there’s room for all of those bands, then there’s space for another. This one hails from Greece, and their debut album Portraits of Mind is classic, high-speed death metal. All riffs and destruction. All menace and mayhem. All leather and denim. The rollicking chug on “Intersperse” compels headbanging of anyone with even the slightest tendency to do so, which is often the best thing we can ask for of a death metal song. Considering the creativity and vision that’s been going into death metal of late, Plague aren’t redefining the sound. They are, however, doing it very well.

From Portraits of Mind, out now via Redefining Darkness

Then again, sometimes death metal sounds more like this—more of the monstrous, guttural, I’m-going-to-kick-your-ass-right-fucking-now variety. Like Rats had already won me over by cribbing their name from one of Godflesh’s best songs, but they didn’t borrow Justin Broadrick’s industrial metal aesthetic. Rather, this is prime, muscular North American death metal—veins bulging, sweat dripping, dive-into-the-volcano death metal that sounds like it couldn’t possibly be made by human hands. It’s easy to get excited by death metal that sounds like “World Devourer” simply for how colossal it is, how heavy it is, and how much it sounds like it’s going to eat your family.

From Death Monolith out April 10 via Hibernation Release

Not one, not two, but three death metal tracks this month? Believe it! And this one’s from a 20 Buck Spin-signed band, which is obviously a highly promising sign (or, if you’re weary of the hype, tiresome I guess, but why be salty about it? There’s a million metal bands). Solothus isn’t new, exactly; the Finnish group already has a handful of records out and has been making music since 2007. But “The Watcher” suggests that we still haven’t heard the best of what they have to offer, and this track itself is a pretty strong argument that we better be listening closely. “The Watcher” is everything that makes death metal exciting more than 30 years after it first reared its ugly, vomiting skullhead—a triumphant mixture of abrasion and melody, impenetrable density underscored by an elegant atmosphere, and even a bit of rock ‘n’ roll badassery in its central riff. So yeah, Solothus are on to something well worth paying attention to—just because black metal’s ready to reclaim its spotlight in 2020 doesn’t mean that death metal isn’t still where a lot of the great stuff is happening.

Diving pretty deep into Dutch black metal has been a fun exercise in learning the language; thanks to Google Translate, I now know that “Degen Van Licht” means “sword of light”! Which, you know, sounds more or less like any other black metal song title, but in Dutch. After highlighting a track from Fluisteraars last month, I’m now pivoting to their countrymen in Turia, whose approach to atmospheric metal epics is spiritually similar though considerably different in practice. There are no horns or acoustic strums here, no real items of consequence that typically sound out of place in a metal song. But “Merode” is triumphant, anthemic metal that gallops forth with intention and immediacy. The gloomy textures lean ever so slightly toward post-punk, though Turia don’t quite commit to the goth metal aesthetic of a band like Tombs. Rather, these are subtle textural pieces of a powerful whole, and another reason to mention that The Netherlands is pretty much nailing this whole black metal thing right now.

From Degen Van Licht, out now via Eisenwald

Mystical Czech black metal band Cult of Fire tend to avoid typical press cycles, and though they’ve built up an ample catalog over time, it’s still been a good seven years since their last proper full length, 2013’s मृत्यु का तापसी अनुध्यान. The mysterious and theatrical band, whose shows look more like occult rituals than rock shows, have made up for that slow trickle with a new double album, or rather two companion albums, Moksha and Nirvana. Each comprises five tracks and only spans about a half-hour apiece—which combined feels more like one proper album than a double—but they each have their own unique character. The former is more melodic and direct, while the latter is more atmospheric, though both are excellent servings of black metal. Where “(ne)Čistý” stands out is in how seamlessly it blends synth-laden hooks with soaring, almost shoegaze-like black metal power, accented with tabla and sitar. The band’s long infused black metal with elements of Hinduism and Buddhism, which is a refreshing contradiction to black metal’s embrace of all things Satanic, though in looking to India for musical influence as well, they open up the possibilities for more diverse sounds, emphasizing that black metal need not dwell in insular communities but rather expand horizons without letting go of the darkness that makes it such a captivating style of music. There’s potential for it to go even farther than it has, and Cult of Fire is one of the bands capable of making that happen.

From Moksha, out now via Beyond Eyes