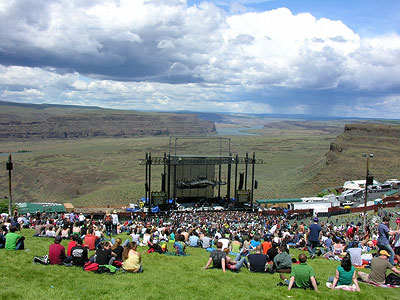 The summer music festival. They have different names, take place on different days and sport varied lineups. What they lack in uniformity, they make up for in wallet-crushing vendors, unbearable heat, long lines at the porta-potties and, oh yeah, a hell of a great time. Their names live in infamy, on the tips of our collective tongues, with people claiming their attendance as a badge of honor for the rest of their lives: Woodstock, Live Aid and the US Festival. So, which festival of 2007 will be the one that finds the future population claiming, `I was there.’ There are a lot of festivals to choose from, and if you’re truly insane, you could try to hit them all. SXSW wasn’t technically a festival, but a conference, and that’s long since past. Coachella was the spring kickoff, and that’s now complete. Here’s a preview of what’s to come, in chronological order:

Memorial Day is usually the time when the biggest summer blockbuster movie is released. Now it’s the herald for the oncoming music festivals! Most people associate this festival with Seattle, and that’s most likely from where a majority of the attendees are coming, but it’s actually on the Columbia River near George, WA, in the center of the state. (Get it? They named it George…Washington!) The venue is called the Gorge, which makes things a tad bit confusing, but for sheer natural beauty, nothing beats it. Some even call it the Grand Canyon of the Pacific Northwest. In fact, it’s won Pollstar’s award for best outdoor venue nine times. Yes, Bueller, nine…times. There’s sort of a caste system of stages, all named after famous shaggy bipeds. It used to be that the Sasquatch Festival was mainly focused on showcasing local talent. It’s grown much larger than that since those times, although there are plenty of Northwest acts to choose from. Yours truly will be giving you a full report on Sasquatch very soon. Here’s the lineup, complete with accompanying `missing link’ style stage name (and yes, I know one of them is a space creature, don’t correct me):

Also look for Incredibly Strange Wrestling to be going on!

As for Bonnaroo, held in Manchester, Tennessee in mid-June, there are echoes of Woodstock as it is planted in a 700-acre farm near Nashville. The range of artists is broader than most festivals making for a truly eclectic experience. Besides the list of luminary bands, there’s an entire comedy line-up and a number of minor artists playing the `café’s.’ Treble’s own Anna G. will report back to y’all about this here festival. Here’s who you can see in Tennessee:

Summerfest in beautiful Wisconsin claims to be `The World’s Largest Music Festival.’ It’s certainly the longest, spanning eleven days! So, grab your cheese and beer and listen to one of these acts on one of these days:

This one is fairly self-explanatory. I’ve heard there might be a Ryan Adams piñata party! For the first day, Pitchfork will be teaming up with All Tomorrow’s Parties to host their landmark `entire album’ concerts. Sonic Youth will grace the crowd by playing Daydream Nation. GZA / Genius will play Liquid Swords and Slint will play Spiderland. Wow. That’s gotta be something. Anyhoo, you’re guaranteed no 0.0’s in this group!

Ah, remember back in the day when Lollapalooza was a `traveling’ festival? I had been to two Lolla’s, the inaugural featuring Jane’s Addiction, Siouxsie & the Banshees, Nine Inch Nails, etc. and the fourth version featuring the Beastie Boys, P-Funk, the Breeders and more. Now, Lollapalooza is relegated to Chicago’s Grant Park. Here’s who Perry Farrell has lined up for your listening pleasure:

Finally, we come full circle as we’ve done a loop around this great country of ours, jumped back and forth from Chicago and have now ended up safely home (at least my home) of Seattle. Bumbershoot somewhat closes out the summer music festival season actually in Seattle in the shadow of the Space Needle, not two and a half hours away. Here’s whom you can see in early September. Since it’s a ways away, not all the acts have been announced yet, but stay tuned to Treble News for info!

Well, make sure to pack your sunscreen! Enjoy the music!