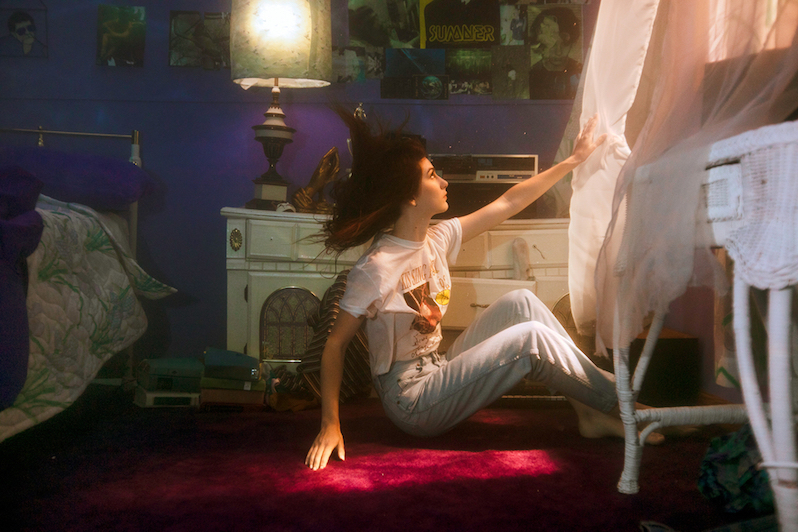 Generally speaking, when we assemble our favorite albums of the month, they don’t fit into any particular category or trend. They’re all over the place—that’s kind of what makes this all fun. We like all kinds of different music, and we enjoy exploring that spectrum. But we couldn’t help but notice that a certain strain of psychedelia permeated most of our favorites, from interplanetary death metal to cinematic art pop, and from paisley funk to progressive desert blues. This month’s selections are some of the most diverse we’ve had in recent months, and some of the weirdest. Then again, 4/20 was just a little over a week ago. Enjoy our picks for the best albums of the month.

Truck Music, the seventh release from the Philadelphia based project Body Meat, is both sensical and perplexing. Christopher Taylor’s latest offering under the plunderphonic persona is a synthesis of modern pop; a mercurial vision that blurs the faintly traced lines of a ceaselessly shifting genre umbrella. Hip-hop collides with electronica while elements of dub are spackled with Chicago’s footwork sound, creating an atmosphere as familiar as it is chaotic. In less than 25 minutes, Truck Music becomes a comprehensive revelation in experimental, forward thinking pop. – Patrick Pilch

Cosmic Putrefaction – At the Threshold of the Greatest Chasm

It takes longer to read the titles of Cosmic Putrefaction’s self-titled debut album than it does to listen to it, but that sub-half-hour of blistering old-school death metal is righteously brutal. The Italian one-man wrecking machine rips his way through one ludicrous-speed bruiser after another, each one a self-contained wonder of blood-drenched riffs and circle-pit majesty. Considering how fertile the field of OSDM bands has been in recent years, it’s not so surprising to hear yet another new band that can pull off the kinds of malevolent delights that bands such as Morbid Angel and Death did back when Florida Man meant “dude armed with some sick riffs.” It is, however, most welcome. – Jeff Terich

What We Said: Essentially it’s a set of orchestrated soul, chopped up ’70s jazz-fusion and synthy new wave fussy R&B joints from an all-star cast of Shafiq’s deep bench of prominent collaborators. Mostly, but not particularly, veterans an up and comers from the burgeoning LA jazz/soul/electronic music set. So yes, there is an updated Soulquarian-hang vibe idealism meets old school Quincy Jones-Mellow Madness and The Dude-black excellence on display here.

What We Said: Inter Arma could have easily made an album’s worth of songs like “A Waxen Sea” or “Citadel” and it would still be one of the best metal albums of the year. They instead went well beyond that, opening up their sound more to reveal greater degrees of nuance that at times reveals some of their most achingly gorgeous music. – Jeff Terich

What We Said: The songs hover in cold air like fragments of glass frozen together and glinting in shrill light, each wave of sound mirrored to a glimmer of light on these rotating crystal figures. The glitchiness and effects-heavy nature of the music calls to mind industrial in that similar notion of roughing up common sound and a keener ear for sonic texturalism and timbre than directly focusing on melody. – Langdon Hickman

Brooklyn-based, Chula Vista-raised Jackie Mendoza is an artist that doesn’t exist in any one space for very long. Her recently released “Mucho Más,” which we dubbed an Essential Track, found broadcasts of reggaeton and dub from outer space, while other highlights from her new EP LuvHz (clever title, that) spread from colorful indie pop (“Seahorse”) to buzzing industrial (“Puppet Angels”). Mendoza is a young artist navigating her way through music and the world by never fully committing to just one part of it, and it’s exciting to hear where she feels like taking us. – Jeff Terich

Nigerien guitarist and songwriter Mdou Moctar’s name first began to cross the screens of American audiences when outlets such as NPR reported on how he played Prince’s protagonist role in a Tuareg remake of Purple Rain. And while culturally Moctar’s experience probably couldn’t be farther from Prince’s, in terms of their music there’s a deep connection. Ilana (The Creator) is a vibrant and soulful set of electrified desert blues, psychedelic and soaring, intricate and urgent. And more than anything, the man plays a mean guitar. – Jeff Terich

What We Said: Morbid Stuff is an album without a lapse in energy, exhaustive sonically, and a lyrically witty razor of boundless proportions. It’s as technical as it is simple, as ruthless and stoic as it is a lazy smile and a shoulder shrug, embracing its genre trappings with a slyness all its own.

What We Said: Falha Comum is considerably weirder and more experimental than anything they’ve done before, and that’s something of an accomplishment given how far-out the band has been willing to venture on past releases. – Jeff Terich

What We Said: Life Metal ruthlessly mocks, defames, and obliterates any concept of joyless and blackened depravity. It is instead, true to its titular intent, a miasma of creative fervor and energy. – Brian Roesler

What We Said: Wand are still very much a psychedelic band at this stage, and they very likely always will be. It’s how their definition of psychedelic evolves that makes them one of the most interesting and accomplished of the bunch. – Jeff Terich

What We Said: To hear the full spectrum of Waste of Space Orchestra’s tonal palette and varying frequencies, a complete listen to Syntheosis from front to back is suggested, maybe even required. The journey is a bit of a commitment at 66 minutes, but to trust in these dark architects is to explore realms of heavy music that few other bands are willing to traverse. – Jeff Terich

What We Said: On Titanic Rising, she has made a visionary shift toward convergence. Her songwriting is still rooted in the same era (although her focus has moved to baroque pop), but Tangerine Dream’s progressive electronic oceans and Laurie Anderson vocoders swirl around the guitars and pianos. In the simplest sense, Titanic Rising sends Mering to space. – Ben Cohn

Hear the new Weyes Blood album, And In the Darkness, Hearts Aglow