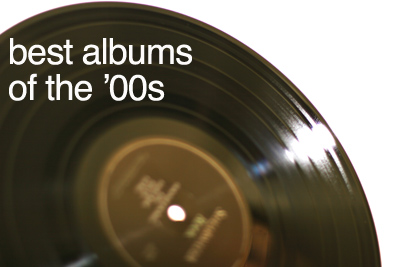 Usually, I have a hard time picking a favorite album out of the multitude of Broken Social Scene projects and offshoots. While I love You Forgot It In People, Fantasies and an entire horde of other albums including works by Jason Collett, Apostle of Hustle, Feist, etc., I have to give my ultimate vote to Stars’ Set Yourself on Fire. There’s just something about the interplay between the vocals of Amy Millan and Torquil Campbell that charms me, especially on this particular album. “Ageless Beauty” has a driving melodic quality that simply romances the pants off of you, while “What I’m Trying to Say” nearly equals it in that category, though doing it in a filter of New Order and Smiths pastiche. “Calendar Girl” is somewhat the post-coital cigarette after such a sexy set of tunes, and it works incredibly well. But the true standout is the very first track, “Your Ex-Lover is Dead.” The brilliant lyrical sparring and faked forgetfulness comes to a magnificent head when they both sing together, “I’m not sorry I met you / I’m not sorry it’s over / I’m not sorry there’s nothing to save.” Doesn’t that just say it all? – Terrance Terich

Broken Social Scene were among the first bands to use flashmob as a recording tool. You could man a space station with that much crew, but basically what the heyday of BSS did was illustrate the fallacy of too many cooks. So what if they spread across any given stage like a volunteer fire department? Unseen it wasn’t distracting, at least. You Forgot It In People is the BSS album praised to death, but the s/t one deserves way more celebration than “pretty decent follow-up.” It broke down the entire language of pop music, concentrating on the sighs, pauses and verbal fillers. Not that it’s awkward or anything, “translation: means ‘I love you” notwithstanding. It’s a dream-bound record that doesn’t truck much with time or space; all the edges run blearily into each other, get lost, then pick up the narrative like nothing ever happened. You can put this record on, immediately get interested, leave the room, and return without having lost much mood. Or you can put it on and mourn the loss of indie rock that felt, sounded, and hurt this good. More than the most highly-functioning co-op in rock, Broken Social Scene were totally endemic to an era that’s better and better in retrospect. – Anthony Strain

TV on the Radio’s debut EP (or mini-album if you prefer) contained only five songs, one of them unlisted, and yet it still came across as one of the richest, most fully realized recordings the year it was released. And to this day, its throbbing, bass-heavy, synth-splashing production still sounds mesmerizing. Relative unknowns upon Young Liars‘ release, Dave Sitek, Tunde Adebimpe and Kyp Malone constructed a darkly beautiful microcosm of post-punk and shoegazer with startlingly gorgeous vocal melodies. It doesn’t so much sound foreign as alien. What human could put together something this sleek and this weird? Yet beneath that heavy mixture of effects lay bare human emotion, from the loneliness and paranoia of “Satellite,” to the sexual ecstasy of “Staring at the Sun,” to the uncertainty and defiance of the title track. Those who kept the disc running after track four lapsed quickly discovered an a cappella cover of The Pixies’ “Mr. Grieves” that proved just how deep the talent runs even without the overdrive pedals. With such a compelling mixture of the earnest and the extraterrestrial, it’s no wonder that the Thin White Duke himself would join forces with them three years later. – Jeff Terich

At just more than a half-hour in length, Oh, Inverted World is one polished nugget of surrealist pop. Most of its 11 tracks barely amble past the two-minute mark and, when they do – such as the drifting middle ground of “One by One All Days” and the ruminative closing remarks of “The Past and Pending” – it lends this otherwise taut album an air of literacy, and an ability to revel in the countless textures that quick-hit tracks like “Weird Divide” and “The Celibate Life” breeze so effortlessly through. As the story goes, it took James Mercer nine years through various incarnations of the Shins’ lineup to finally find the balance he was looking for, but Oh, Inverted World is one hell of an arrival.

Los Angeles-via-Berlin-via-Brooklyn-via-Los Angeles band Liars dropped their debut record of ferocious, churning post-punk in 2001 amongst a full-blown revival of the genre’s dance-friendly, post-disco rock roots. Even then they stood out from their peers, but with the release of their divisive follow-up They Were Wrong, So We Drowned – a bizarre, witchcraft-themed collage of experimental rock and noise-ridden sludge – it was quite clear that Liars were not content with following any kind of predictable path of artistic development. As such, fans and critics were probably more prepared for the percussive, claustrophobic din of this band’s third album Drum’s Not Dead, which may partially explain why it was widely acclaimed so immediately. But more importantly, this is simply the best work from this band to date. Drum’s Not Dead is a swirling, richly textured opus of galloping, drum-driven rock and ominous drone that again finds them forging into another new, obtuse realm of sound. Beyond its obvious reference to the album’s heavy percussive bent, “Drum,” according to Liars, is also the thematic embodiment of “the spirit of creative confidence,” while the opposing force known on the record as “Mount Heart Attack” represents “stress and self-doubt.” A bit unclear at first, perhaps, but as you listen to Drum’s Not Dead these antagonizing elements are clearly manifest, their tense call-and-response interplay sporadically exploding into beautifully arranged chaos. – Derek Emery

Neither Iron & Wine’s first album, nor the one with the most radical shift in approach, Our Endless Numbered Days is quite possibly my favorite. The others that made the list all have perfectly valid reasons for being there, but when it comes to what I consider `pure’ I&W, Days stands out. After the four-track homemade quality of his first album and EP, and before the collaboration with Calexico and the experimentation of The Shepherd’s Dog, Sam Beam went into the studio and laid down some lush pastoral goodness. Most are familiar with “Naked As We Came” and “Sunset Soon Forgotten,” but tracks like “Free Until They Cut Me Down,” “Sodom, South Georgia” and “Passing Afternoon” roll through my head in a pleasing manner rather often. At a time when Iron & Wine was more known for their cover of “Such Great Heights,” this album seemed to fly below detection a bit. In my estimation, the polish of the studio took nothing away from Beam’s purity; it only made it shine that much brighter. – Terrance Terich

Looking back, it seems that Hot Chip had their album titles reversed. Coming On Strong was the real warning, where as its successor truly found the U.K. dance-pop troupe coming into their own as formidable songwriters and purveyors of unstoppable grooves. With this second full-length, they stood tall, revealing a more grown-up brand of funky chicanery with a deeper emotional core, and a pair of instantly classic singles in “And I Was a Boy From School” and its more absurd companion, “Over and Over.” But even as the group showed off their more sleek and sophisticated side, the hijinks and smart-assed quips were still on display, peaking with the title track’s cheeky threat, “Hot Chip will break your legs/ snap off your head.” They sure cleaned up nice, but it was reassuring to hear that, even at their most meticulous, Hot Chip were still lovable goofballs. – Jeff Terich

At a show in Los Angeles not long after The Crane Wife was released, Colin Meloy joked that “the little elves” who live in the basement of the Capitol Records building down the road had “cobbled together” an album for his band. While the audience laughed, Meloy was addressing his fans’ common concern that The Decemberists’ jump to a major label would mean forcing the famously quirky group to abandon its folky whims and five-dollar words. Those fears were quickly assuaged when The Crane Wife arrived, complete with a Civil War love song, a creepy rumination on violence, a 12-minute prog rock anthem, and the disjointed telling of a Japanese folk tale woven throughout. The Decemberists had lost none of their idiosyncrasies, and became more skilled in their songwriting. Meloy has always invested his song’s characters with a spirit that lifted them beyond gimmickry, but when he sings here in the voice of a man ashamed of how he mistreated and misunderstood his magical wife, there is a tenderness that’s more heartfelt than the self centered confessional songs pumped out by armies of singer-songwriters. Those elves know their stuff. – Elizabeth Malloy

The harp. The 10-minute songs. The witchy voice that sings tales of geldings and meadowlarks and uses words like “thee.” Joanna Newsom is a lot of things, and none of them are run of the mill. That includes the strikingly uncommon beauty of her songs. The five tracks on Ys each create a world unto themselves, conjured with a rare blend of musical and lyrical poetry. “Emily” is the most famous, where Newsom sings about her father and sister’s attempts to explain the night sky to her. It’s a touching tribute, and also a gorgeous iceburg tip. Newsom goes on to explore the master and slave relationship with the parable “Monkey and Bear,” and gets personal on the hushed, quavering “Sawdust and Diamonds.” In an age when iTunes has made cover art moot, the cover of Ys is a richly detailed Rennaissance-style portrait of Newsom that edges toward over the top. It’s the perfect introduction for a group of finely crafted, whimsical songs that don’t feel of our time, and that’s what makes them so special. – Elizabeth Malloy

Listening to Devotion is often like wandering into and becoming pleasantly lost in a park full of winding paths, still ponds, and overgrown greenery; perhaps you run into a few acquaintances whom you had nearly forgotten, smile bashfully and knowingly as you pass them by, immersed in sleepy-eyed reveries. It is music to give yourself over to, willingly, confident that having let it carry you away, you will be brought somewhere secretive and desirable, somewhere familiar but imbued with a previously overlooked aura of mystery. Devotion works best as a whole, where the songs resonate together as covertly related memories, intensely colored but blurred behind the gathering years. – Tyler Parks