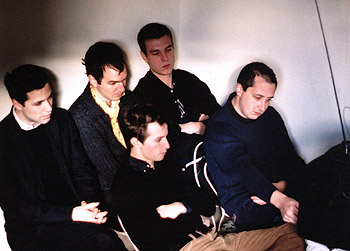 The first track on The Walkmen’s debut EP, “Wake Up” served as one jaw-dropping introduction to the New York band. Having earned a tidy bit of hype from having three ex-members of Jonathan Fire*Eater, The Walkmen may not have emerged from nowhere, but their wintry, frosted, anachronistic garage rock sound certainly could have. Blending post-punk style guitars with a twinkly, old-timey sounding piano, “Wake Up” is one truly strange song, even now, seven years after the group first introduced it.

That strangeness is partly what makes “Wake Up” such a compelling track. While the elements may seem disparate, they come together as something harmonious and enchanting, but with a fierce kick that stuns on impact. Hamilton Leithauser describes a vague, dystopian scenario (“out of a station through my radio/ nothing’s on it/ like a joke that’s told without its final line/ where’s it going?“) over a choppy, abrasive guitar, only to drift into a dramatically restrained chorus. Leithauser gently croons “I’m trying…” just before the big climactic crash, and he belts out the titular wake up call. “Wake Up” is most captivating during its spare, metronomic piano breakdown, sounding eerie, gorgeous and catchy at the same time, laying a haunting bed for Leithauser’s cynicism in lines like “we’re choking to live.” The group’s icy garage rock began to thaw eventually, but they still sound strongest within arm’s reach of a blizzard. – Jeff Terich

10 Covers Albums: One Artist, One Tribute