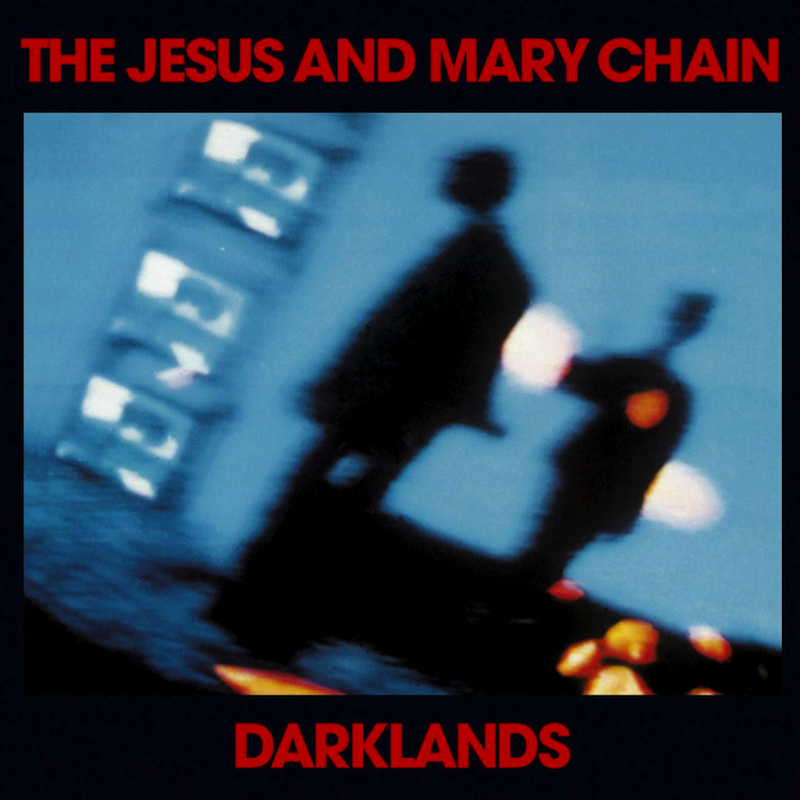 Post-Gillespie, post-Psychocandy, Jim and William Reid reduced the sugar and fuzz, letting macabre stiffen the melody. Darklands is the densest beast in the Jesus and Mary Chain discography. Completely automated drums and a preoccupation with the dismal side to life cast it in contrast to the debut’s hazing Wilson fuzz box, or Stoned and Dethroned‘s knowing tranquillity. Confinement imagery looms large, particularly that which life springs on the individual, rather than an angst of fashion or pre-determinism. The themes of rain, self-demolition and heartbreak in the most vindictive sense clutter the mindset of these songs. This time the girl is in league with the world against our protagonist, and the manic confusion that made all OK won’t push the buttons any more. The party is over.

Musically, the Mary Chain reference rocks annals in a vein that fits this album title. Those reference points which aren’t glooming to begin with are transmitted with a stark drizzling brush. The title track hacks the grandeur of Bowie’s “Heroes” into a stained Velvet Underground cast. William’s on vocals, speculating about throwing himself into a “river of disease.” Thus begins a series of desolation sonnets. “Deep One Perfect Morning” argues that it’s “better to paint my hate on the walls” before thoughts turn backwards.

There’s a knack for the sardonic here that falls into the same tradition as the most scathing blues and Blood on the Tracks. “Fall” signs out “dead as a Christmas tree.” “On the Wall” begins stating “unlike the mole, I’m not in a hole.” However the situation soon sours likened to that of a doll on display, with the added cachet, that “dolls can’t see anyway.” Meanwhile, love, sex and adulthood are practically separated. “Happy When It Rains” plugs “into her electric cool” and falters. “Nine Million Rainy Days” anticipates The Cure’s Disintegration via Johnny Cash. With no more “limbs to break” it concludes: “all my time in hell was spent with you.” “Cherry Came Too” dismembers Elvis and Orbison lust with a Leonard Cohen despair. From “making love to the sound of the scream” to pleading “come on and drag me down” in moments. The instrumentation is buoyant given the circumstances.

With a final flourish, there’s redemption. Like some never-was directors cut of Lou Reed’s Berlin, “there’s something warm in everything.” The rain and romance are forgiven. It’s a further testament to the Reid’s song writing that Darklands looks and references like a death knell, but also sounds like a classic rock record. The “Sympathy for the Devil” backing on “Nine Million Rainy Days” might be ironic, but Sticky Fingers is more than traced, filtered like Tonight’s the Night and all of the above into a potent mixture.