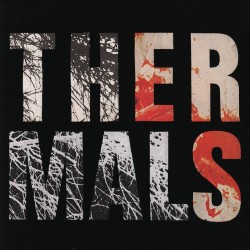 The Thermals music’, while energetic, cunning, and well executed, has never struck me as awfully innovative. Seeing how their critically acclaimed effort The Body, The Blood, The Machine was released in 2006 — nearly three decades after the Buzzcocks found the perfect blend of pop and punk — there’s never been much reason to expect groundbreaking musical innovation from any of the band’s efforts. But what’s particularly notable about The Body, The Blood, The Machine is the ridiculous amount of spirit, guts and honesty that Hutch Harris & Co. spilled into every word and every moment on the record. At first, the label of post-pop-punk (as described in the band’s own bio) seemed nothing more than ridiculous pretension in full manifest, but after a few listens, the term made more sense: That record sounded like pop-punk, but felt like something much more serious and dire. It was epic in both its concept and its honesty.

In the years that followed, the Thermals slowed down production for a couple years before releasing Now We Can See and Personal Life within a year and a half of each other. Both those albums had great songs and a good sound, but the intensity and honesty were turned down enough for both records to slip away from my radar after a few listens. But following another break and a switch from Kill Rock Stars to Saddle Creek Records, the group has made an offering that at least takes a step back toward the gravitas of their best moments.

At just under 27 minutes, Desperate Ground is the band’s shortest album, and a return to form as regards their lo-fi aesthetic (at least partially thanks, no doubt, to legendary producer John Agnello.) And Harris’ lyrics are as straightforward as ever (e.g. the album’s opening lines: “I was born to kill/ I was made to slay/ Unafraid to spill blood on the land/ When you command I will.”) The lofty themes of death and war are tackled fairly well, and these songs are begging to be played live, but for a studio recording, there’s still something lacking.

Desperate Ground features a few brilliant thrashers (“Born to Kill,” “Where I Stand,” “You Will Find Me”) and a few payoff moments burn slowly before letting loose (“I Go Alone”, “Our Love Survives”). There are standout moments on Desperate Ground, certainly, but as a total package the album is just missing that spark that makes the band’s best albums (and live shows) an almost spiritual affair. But, just as Harris’ closing croons on “Our Love Survives” shine with hope, I hold faith that this album signals a push back in the right direction.

The Thermals – The Body, The Blood, The Machine

The Thermals break up

Stream the new album by The Thermals, We Disappear

The Thermals : We Disappear

Thermals : The Body, The Blood, The Machine