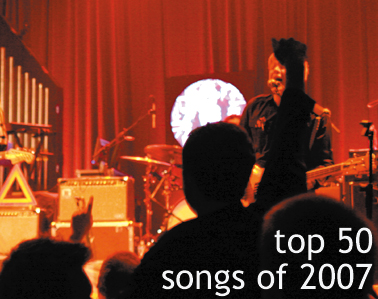 Admit it. You loved “Umbrella” as much as that 15-year old girl with her Sidekick texting furiously on the bus. You too were blown away by her perfectly pop video and maybe you would flip to MTV just to catch a glance of her asymmetrical bob in action. You heard those rumors about Rihanna and Jay-Z and thought, “that’s ok Jay. You may have 99 problems and a bitch ain’t one, but I’d ditch Beyonce for Rihanna too.” You dug those sharp drum beats, especially the tight hi-hat hits, that seemed so refreshing up against the increasingly bland pop scene. And you especially loved the inescapable “‘ella, ‘ella eh eh eh” that stayed glued inside your brain that even the somber Iraq war movie “In the Valley of Elah” couldn’t escape those words. And you know what? You weren’t the only one. ‘Ella ‘ella eh eh eh…. – Jackie Im
Watch Video

Animal Collective are practically the owners of one of the freakiest strands of indie pop out there, and proved it once more this year on Strawberry Jam. Even though it was member Panda Bear who let listeners know who truly was the main creative fountain behind the band earlier this year on his marvel of a solo release Person Pitch, his chemistry with fellow members Deacon, Avey Tare and Geologist is still something that is wholly unique. “Fireworks” is only further proof in the pudding with the keyboards that drizzle like sap from a tree smelted in with a ticking beat with the pitched up and jungle squawking vocals telling a story that, while even though one can’t tell what the fuck it’s about, still knows that spearheading a totally kooky monograph with trippy noises is what Animal Collective does best. – Chris Pacifico
Watch Video

Akron/Family – “Ed is a Portal”

Whenever I would want to convert anyone to the glorious music of Akron/Family, I would play the second track from Love is Simple, “Ed is a Portal.” If the tribal feel of the chanting and the drums weren’t enough to win over my prey, it was undoubtedly the variance between the sweet and whispery refrains clashing with the shouted passages, while the natural and pastoral settings collide with the modern day trappings such as electronics and alarms. Akron/Family, on Love is Simple, have managed to combine the endearing sweetness of Brian Wilson and the Beatles with a newfangled freak folk aesthetic. This epic almost intro to Love is Simple is an ever changing thrill ride, going from style to style with more starts and stops than a track meet, yet far more exciting. – Terrance Terich

A sexual bait-and-switch, the lyric “don’t get any big ideas/…you’ll go to hell for what your dirty mind is thinking” free-floated for years in Radiohead lore. But the transition of “Nude” from languishing artifact to the best song on In Rainbows belongs to the fastidious Thom Yorke and his obsession with the perfect vocal (“I never liked the way I sung it,” he said recently). In Rainbows contains the most gorgeously-superimposed singing of Yorke’s career and “Nude” is the first such scenario, hanging the vocal like a chandelier, trembling from a distant collision. There are (miniature) fake plastic trees all over “Nude” but where the older piece was more like sculpture, “Nude” is unrelentingly painted, a sweep of erudite color and mannerism. Yorke has written several John Cheever-like morality pieces over the years and “Nude” joins “Black Star” and “True Love Waits” as the best of the lot. – Anthony Strain

Spoon – “You Got Yr Cherry Bomb”

It sounds, at first, like a celebration—the shaking tambourine, twinkling xylophone, vibrant horns, and some of the deepest soul Spoon’s ever delivered. But there’s a minor key piano that casts the slightest shadow along this summery anthem, and its lyrics are anything but a party: “It was the longest day that I’ve ever known/ I watched you start that drive alone.” Sometimes a cherry bomb has to reach the end of its wick and Britt Daniel, Jim Eno and the rest of the Spoon gang turn that bittersweet parting into a perfectly crafted pop song with one foot in the present and the rest of its body split between 1960s Motown and Stax sessions. With this kind of energy, Daniel exhibits a healthy optimism, offering “life could be so fair/ let it go on and on.” There’s no better song to play when starting the oft-stated, much-clichéd and unquestionably universal first day of the rest of your life. – Jeff Terich

Jens Lekman – “The Opposite of Hallelujah”

Poor Jens Lekman. He’s just trying to have a talk with his sister, help her out like a good big brother, and damned if the ocean isn’t trying to mess everything up. It makes him feel stupid, sucks out his words of wisdom and leaves the endearing Swedish shlub to improvise. He sings, “I picked up a seashell to illustrate my homelessness/ but a crab crawled out of it, making it useless/ and all my metaphors fell flat/ down on the rocks where we sat,” depicting a lamentable and laughable scene. But at the chorus, yes, the chorus, everything comes together perfectly. The handclaps, the percussive piano, the backing vocals—they all converge and rise harmoniously as Lekman seems to get the point across in the most indirect manner. Using irony for the most sincere of ends, Jens claims it’s the “opposite of Hallelujah,” but that glorious incantation, that wonderful, joyous group singalong is about as close to a Hallelujah as one is likely to hear. Amen. – Jeff Terich
MP3

At the end of my trip to Bonnaroo 2007, happy, tired, and filthy from not having properly bathed in over four days, my flight from Nashville back to San Francisco was cancelled, and I therefore had to spend a very rainy Monday night at the Nashville airport. Luckily, I was able to band together with a few other stranded Bonnaroo attendees, and we swapped stories over beers at the airport bar and then slept in a huddle to protect our belongings. I hadn’t given Neon Bible a good listen up until that night, when I found myself listening to “Keep the Car Running” on repeat as I fell asleep on the cold airport floor. The thrilling energy and depth of the song matched my feelings of exhausted elation and renewed sense of spirit (. . . hippie much? C’mon, it was the `Roo!), and since then it has remained my go-to song whenever I need a good old-fashioned musical thrill. “Keep the Car Running” intensifies so admirably because it remains melodic and centered as it ascends, keeping the band’s socially conscious lyrical content at its core. The Arcade Fire’s overall sound is undeniably epic; in the case of “Keep the Car Running,” they bypass epic and reach the point of absolutely exhilarating. – Anna Gazdowicz
Stream

Typically, three or four minutes is all you need to make a great song. If I were to dig back through all of my favorite tracks of all time and pick out the cream of the crop, the average length would probably be something in the area of 3:45. That’s purely an estimate of course. Sometimes, that’s just not enough. Animal Collective’s Noah Lennox, better known as Panda Bear, made that perfectly clear with his well beyond ten minute opus “Bros,” which serves as the pinnacle of his outstanding album Person Pitch. It is in this song where the continuous comparisons to Brian Wilson are most apt, his innocent and lovely vocals recalling the young Beach Boy, while the song’s buoyant and sublime melody achieves a sort of beauty of which prior Animal Collective efforts only gave glimpses. There is something melodically and emotionally pure about “Bros,” an ephemeral quality that few artists truly possess. Twelve minutes just isn’t long enough for something this amazing. – Jeff Terich
Watch Video

Aesop Rock – “None Shall Pass”

Chuck D wouldn’t have hit as hard without Terminator X and the Bomb Squad. Melle Mel would have just been a public service announcement without Grandmaster Flash. And Run DMC just isn’t without Jam Master Jay, God rest his soul. Every emcee needs a great DJ or producer behind him, and while Aesop Rock produces a good chunk of his own tracks, he’s even mightier when paired with the amazing Blockhead, as evident on None Shall Pass‘ title track. Block drops a high speed Pac-Man disco with some graciously melancholy guitar underscoring the analog blips and bloops, setting a surreal backdrop for Aesop’s misanthropic chorus: “And I will remember your name and face on the day you were judged by the fun house cast/ and I will rejoice in your fall from grace with a cane through the sky, like `none shall pass.’” All the while, there’s an eerie sample of a voice pleading `I am trying to help’ between verses, like the voice of the judged trying to enter this upside-down, Atari banging Xanadu. – Jeff Terich
Watch Video

I recently saw Battles perform “Atlas” at Neumo’s Crystal Ball Reading Room in Seattle, and was fairly well blown away. Even without the layers of vocal trickery, which is either loved or dismissed within the song, Battles still managed to sound as good, if not better, than their studio recorded effort. John Stanier, former drummer of Helmet, guides this ship between the seas of metal, prog and classic rock with the sheer force of will, while the other members, from Lync, Don Caballero and solo artist and vocal acrobat Tyondai Braxton noodle around the edges, but always finding the center. Mirrored is an incredible album, though at times songs can become either goofy or repetitive. “Atlas” is neither, instead representing the next evolution of genreless music. – Terrance Terich
Watch Video