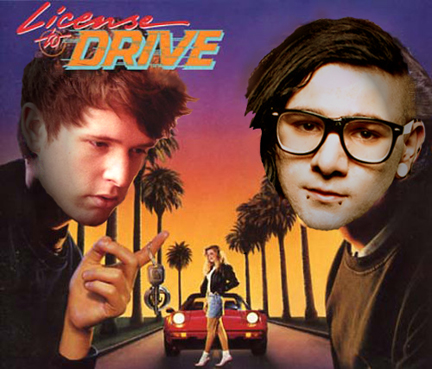 James Blake has a bone to pick with dubstep. Yes, you read that correctly: dubstep, the very genre for which he’s made himself known and subsequently conquered with his own silky smooth take. More specifically, though, James Blake takes issue with the more commercial, “American” version of it that’s since become a more common soundtrack to getting “iced.” Or roofied. And it’s hard to find fault with him there.

In a recent interview with The Boston Phoenix, Blake laid out his frustrations:

“I think the dubstep that has come over to the U.S., and certain producers — who I can’t even be bothered naming — have definitely hit upon a sort of frat-boy market where there’s this macho-ism being reflected in the sounds and the way the music makes you feel. And to me, that is a million miles away from where dubstep started. It’s a million miles away from the ethos of it. It’s been influenced so much by electro and rave, into who can make the dirtiest, filthiest bass sound, almost like a pissing competition, and that’s not really necessary. And I just think that largely that is not going to appeal to women. I find that whole side of things to be pretty frustrating, because that is a direct misrepresentation of the sound as far as I’m concerned.”

While Blake “can’t be bothered” naming the culprit in the American ugh-step fiasco, I think it’s pretty clear which artist has his hoodie in a ruffle. The perp has been staring directly at us from the cover of Spin for a few weeks now, his multi-colored fingernails and thick-framed glasses looking better suited to a mid-’00s screamo act than a knob twiddler. But then again, that very dude used to be in a screamo band called From First to Last, and his name is Skrillex. And he’s awful.

Generally speaking, I’m with James on this one. Skrillex, as well as artists who share a similar take on dubstep, doesn’t do subtlety or nuance; he prefers sticking to meaty bass drops, vocal samples that sound like chipmunk Ke$ha and any deep house elements that can most easily be recycled. It pairs well with 24 oz. Red Bulls and dudes yelling “THROW YOUR FUCKIN’ HANDS UP!!!” every four measures or so. And it is definitely more macho than anything James Blake has ever done. I certainly can’t blame him for taking offense at music that makes a better bludgeon than entertainment, but when Blake talks about “misrepresentation” of dubstep, he starts to lose me.

No doubt, there’s a pretty massive difference between Skrillex’s music and the more atmospheric and innovative work from artists like Kode9, Burial, Zomby and Joker. But Blake throwing a hissy-fit over American bros having their way with the dubstep “ethos” is a bit like the time on “30 Rock” when Frank started wearing Harvard apparel to annoy Twofer. Or when Dwight tried to apply to Cornell on “The Office,” and Andy Bernard took special care to prevent that from happening. Dubstep, apparently, is a highly vaunted institution for dignified gentlemen, and recreational beatmakers aren’t welcome within its hallowed halls. Plenty of artists have belittled each other’s music before, often to hilarious ends. But usually the best defense against bad music is to make better music, and frankly, James Blake’s music is too boring not to party rock its own glass house.

I reviewed Blake’s self-titled album earlier this year, and at the time, it seemed interesting, kind of cool, and a little different. But with repeated listens, I found myself increasingly losing patience with his lethargic ballads. If my review of the album sounded too complimentary, consider this my mea culpa. Blake does nuance, definitely — his songs are so subtle they barely exist. I like gentle, atmospheric as much as the next guy, but when your cover of a Feist song makes the original sound punk rock, you’ve definitely done something wrong. James Blake is the closest thing dubstep has to a crooner, but he doesn’t have the charisma of Sinatra or Mel Tormé. Hell, I’d settle for a dubstep Tony Clifton!

Skrillex could actually teach James Blake a thing or two, come to think of it, and vice versa. Blake could show Skrillex that dance music need not be a blunt weapon, and Blake, himself, could learn that music too delicate to dance to usually isn’t any fun. They could even team up, buddy cop style! Blake and Skrillz: One’s straitlaced and refined, the other is a loose cannon. Come to think of it, Skrillex looks an awful lot like a young Corey Feldman; with a little work James Blake could make a decent Corey Haim, and then we’d get a dubstep “License to Drive.”

Special thanks to Adrian Wong for reminding me that Radio Dept. songs and albums make good column names.