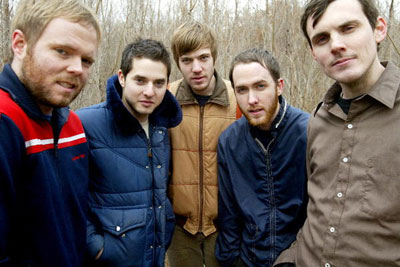 In the midst of their final tour for last year’s acclaimed album, The Trials Of Van Occupanther, the boys from Denton , Texas find themselves on a sharply ascending curve. After a couple of Mojo nominations (best album, breakthrough act) and opening for acts like Keane, Midlake seem destined for a meteoric rise. Guitarist Eric Pulido chats (via e-mail) about themes from the much-lauded Van Occupanther, successes they’ve had thus far, and what comes next for the band.

Treblezine: The pastoral images invoked by Tim (Smith)’s lyrics seem unique within the current music scene. What particular influences play a part in developing the imagery of the songs?

Eric Pulido: Both albums [2004’s Bamnan and Silvercork and 2006’s Van Occupanther] evoke a lyrical image that is of another time. Capturing that time and place is a large part off what made up the lyrical content. I think the lyrics of Van Occupanther identify with a pastoral theme at times because it represents warmth and purity. Although it goes deeper than that, it’s the way I see it…but I’m just the guitar player.

Treble: While we’re on the subject, is urbanization and an ever more industrialized world a conscious part of the thematic thrust of your song craft, which seems like a reaction to these things happening? (Sorry, this question is a little post-modern) In other words, are the images of bygone times a vehicle by which to think nostalgically of what the world used to be like?

Pulido: I couldn’t have said it better myself. I love technology and find myself depending on many of today’s advancements. But in everything, there is good and bad and with a change in technology there seems to be a change in attitude as well. Maybe its naive nostalgia on our part to romanticize about the past, but who doesn’t? The grass is always greener…

Treble: Regarding a recent resurgence of ’70s AM gold-style rock in the vein of Fleetwood Mac, The Carpenters, etc, can you speak to where Midlake places itself on such a continuum? Do you have any sort of reaction to such comparisons?

Pulido: Oddly enough, I’m listening to [Fleetwood Mac’s] Tusk while doing this interview. It’s hard not to wear your influences on your sleeve. That era was and is very inspiring to us, so inherently you will hear it in the music we make. We weren’t trying to have a ‘retro sound,’ we just wanted to make a classic sounding album with good songs. You can’t really control people’s view of where we fit in style, genre, or what musical movement we’re a part of. We didn’t sit around and say, “Hey guys, this whole ’70s thing hasn’t been tapped into enough, let’s do that.” It was very natural as all influences should be. We’re happy to have the comparisons and understand where they come from, but our focus is continuing to push for a better album.

Treble: A deeply melancholic beauty runs through The Trials of Van Occupanther that is both timeless and refreshing. I understand that the album took about a year to complete. Can you explain a little about the conception of the album, both individually (songs) and as a whole?

Pulido: Although Van Occupanther is not a concept album, there is a common theme that runs through it. We wanted both the lyrical and sonic make-up of the album to capture a warm feeling for us and the listener. I think for that very reason, even though it was written and recorded over such a long period of time, the songs work well together.

Treble: Is the band currently working on a new album?

Pulido: The working title is The Courage of Others and it will probably be a bit darker than Van Occupanther. We hope to have it done by this time next year.
Fingers crossed…

Treble: How’s the view across this vast country? Any particular highlights from the road?

Pulido: [This] US tour is the last [one] for Van Occupanther, and it’s been really amazing for us to see things grow. Seeing more people come out to shows and singing along is a wonderful gift to us. We recently had a wedding proposal mid-set at the ACL festival, our first ever, and it was very cool indeed. She said yes!

Treble: Congratulations on the Mojo nominations. How do you feel about all the recognition?

Pulido: Thank you, we are very grateful for the attention we’ve received from the album. We don’t have much for awards on the shelf, so it’s great for us to even be nominated by such publications as Mojo. Our goal for the next album is magazine covers and music awards…wish us luck!

Midlake : The Courage of Others

Midlake : The Trials of Van Occupanther