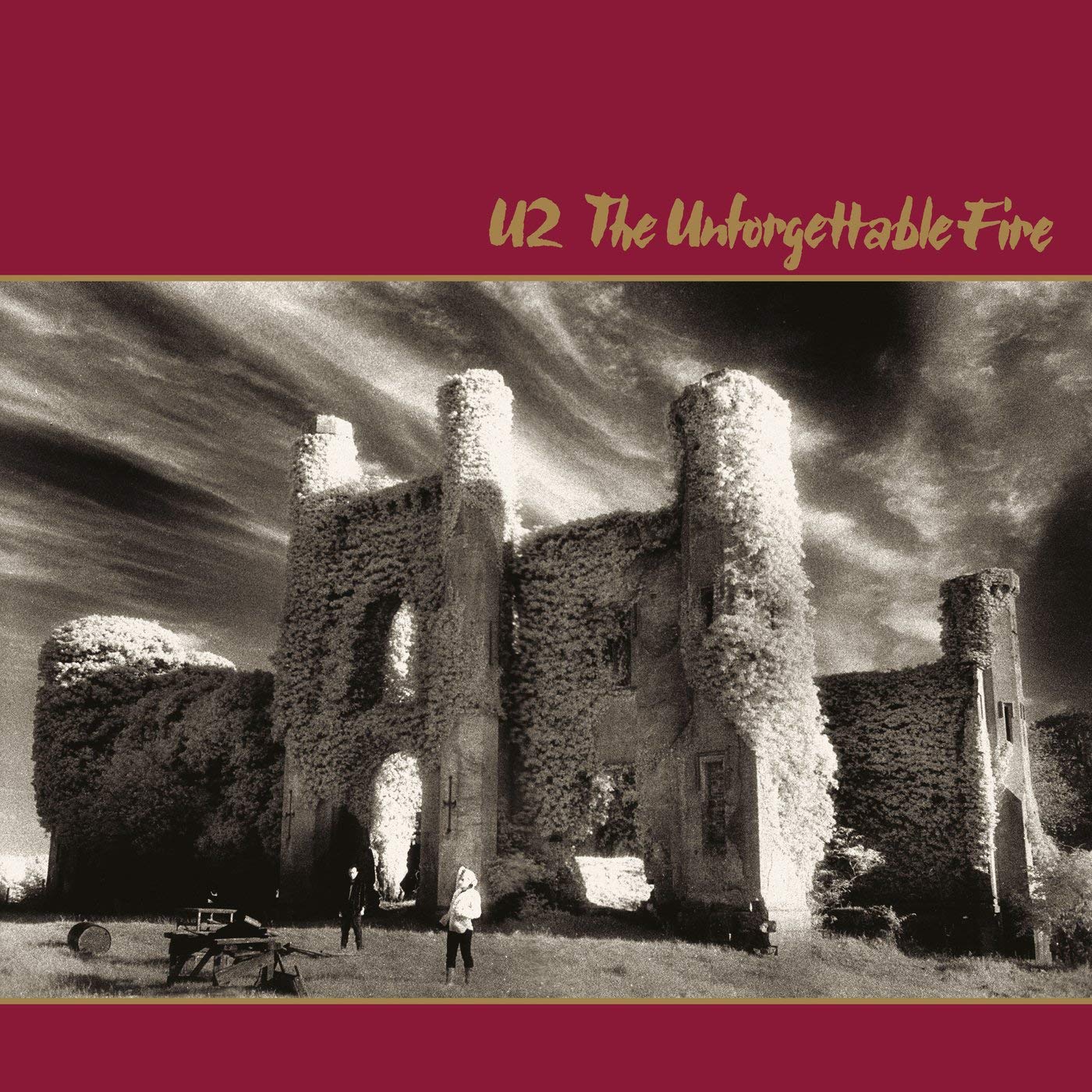 The Unforgettable Fire was, aptly, the spark that generated a blaze that would have repercussions throughout U2‘s career. The young, religious and rebellious foursome had already conquered Ireland, but it took a production team made up of an Englishman and a French Canadian to guide a decidedly American album into the American consciousness and worldwide fame. For their fourth album, U2 looked to Brian Eno, who had just formed a partnership with Daniel Lanois, for guidance. Eno had previously produced the legendary `Berlin’ trilogy with David Bowie, a series of landmark albums by the Talking Heads, and the first albums from art-pop new wave band Devo. Lanois had played guitar and pedal steel on Raffi records. But together, they emerged as the pre-eminent production duo who produced not only The Unforgettable Fire, but also Peter Gabriel’s So, and U2’s gargantuan hit, The Joshua Tree. U2 also looked to the history of their home country for guidance in recording at Slane Castle. The name of the album itself was taken from a series of photographs depicting the aftermath of the atomic bomb blasts at Hiroshima and Nagasaki. This confluence of cultures and ideas provided a much-needed turning point for the band.

Eno and Lanois built upon U2’s strengths while steering it into experimental waters. Larry Mullen’s drums flourished while Adam Clayton’s bass became slinkier and funkier. The Edge’s guitar effects became more atmospheric, at times not even resembling a guitar. Bono, meanwhile, became a better lyricist, and building his Celtic wails to monolithic proportions. Opener “A Sort of Homecoming” was indicative of the rest of the album, a song filled with such grandeur that one could hardly believe it was the first song. Songs such as this one were usually reserved as the closer, but The Unforgettable Fire was an album full of closers, each song more grandiose than the last. “Pride,” sometimes given the parenthetical name “In the Name of Love,” one of two singles from the album, became one of U2’s many anthemic signature songs, spotlighting the atrocities that spring from people using love as an impetus for change, such as Jesus, and specifically highlighting the assassination of Martin Luther King, Jr. The song became a regular encore sing-along, one to which most everyone knows the words.

Bono’s falsetto gets some exercise in the chilling song “Wire,” a song which Bono calls the ‘hypodermic needle’ from the album. At least a couple of the songs from the album have to do with heroin, as does one from The Joshua Tree, as the drug was prevalent in Dublin at the time and destroying the lives of some of the band’s friends. References to tracks and dope find their way into “Wire” with the dark ending lines sealing the user’s fate, “Here’s the rope, now…swing away.” The instrumental “4th of July,” a strange atmospheric break in the action, is more the result of Eno’s ear for the sublime as the song began as simply Adam Clayton playing a little sliding bass line with the Edge just unconsciously joining in and Eno later adding effects to the piece. And then comes “Bad.”

“Bad” is one of those songs that send shivers down your spine. There are only a handful of songs that have this effect on me, including David Bowie’s “Young Americans” and Radiohead’s “Let Down.” Whereas Bono was angry and righteous on their previous album, War, in this song he expresses his desire to sometimes just let go. The song has, like “Wire,” been repeatedly said to be about heroin, though there are no overt references. The song builds up into a huge ball of potential energy by the end, with Bono singing “This desperation, separation, condemnation, revelation, in temptation, isolation, desolation, isolation, let it go” before the screams to the world of being “wide awake” and the ultimate diffusion of “I’m not sleeping.” The brilliant “Running to Stand Still” would complete the heroin trilogy three years later.

“Elvis Presley and America” was the result of Eno slowing down the drum track from “A Sort of Homecoming” and having Bono improvise lyrics about Elvis. It would be alternately loved and hated by various critics and fans, but it highlighted some of Eno’s studio rules, resist change and embrace errors. So what song would close The Unforgettable Fire on an album full of closers? The sweet and meaningful lullaby to Martin Luther King, Jr., “MLK.” It was the second shortest song on the album, only beaten by nineteen seconds from “4th of July,” and the most straightforward, a healing prayer to ease the minds of the listener after the difficult themes of the previous nine songs. Their last wish expressed on the album was that King see his dreams realized. “MLK” is a fitting end to a deeply important album.

For me, The Unforgettable Fire is the type of album that not only holds a special place in my heart personally, it is also an album I would defend to my dying day as one of the most significant, not only in the band’s career, but in the history of pop music in general. It would be a comfort for me as I listened to it over and over again on my Walkman during car trips. It would begin U2’s fascination with America which would carry over into The Joshua Tree and Rattle and Hum. It started the collaborative production career of Brian Eno and Daniel Lanois. It featured what would be considered two of U2’s best songs, “Bad” and “Pride (In the Name of Love).” It would inspire hundreds of artists for years to come, even spurring Miles Davis to reportedly ask for the record to be played while he was on his deathbed. It would herald the emergence of U2 as more than just a rock band, causing Rolling Stone magazine to declare, before The Joshua Tree, that U2 was “the band that matters most, maybe even the only band that matters.” It was a collection of songs that sparked a fire within the heart and mind, and it is an album that is certainly unforgettable.

U2- The Joshua Tree