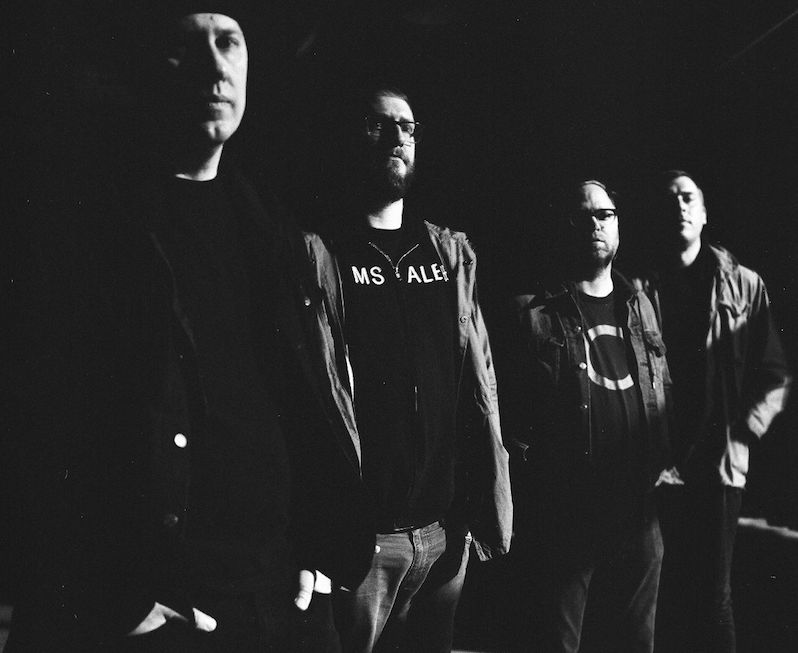 Wailin Storms never set out to be prophetic.

The North Carolina noise-rock band, who just released their third album Rattle via Gilead Media, create music that reflects and sounds like a world engulfed in flames. There’s an old-world sensibility to some of what they do—vocalist Justin Storms has the haunted wail of a fire-and-brimstone preacher, and for a band in the heavier music sphere, a lot of their music is influenced by American folk and blues tradition. But it’s backed by a massive and muscular sludge and noise rock sound, bridging the cacophony of The Jesus Lizard and Oxbow with the soul of traditional American music.

Yet Rattle ended up being slated for release as the country ended up in lockdown as a result of the spread of COVID-19, effectively ending live music and preventing the band from being able to promote the album. And not long thereafter, the country erupted in protests over the killings of George Floyd and Breonna Taylor at the hands of police officers. The chaos, anger and panic of the U.S. right now looks a lot like how Rattle sounds—tense, incendiary, overwhelming. Which is part of why Storms is doing what he can to try to stay grounded right now, most of which involves going outside—as much as one can during a pandemic.

“Hiking. A lot of hiking,” he says. “In North Carolina, we have a lot of trails around Durham, so that’s been kind of my salvation. I’ve always used that as an outlet as a meditative state or to get away from all of the stressors of life. So that’s been a good outlet for me, but there are folks running by you without masks, so you’re jumping off the trail to avoid them. Also there are snakes. It’s not always easy to jump off the trail when you’re trying not to get bitten by a copperhead.”

We spoke to Storms about having to put being in a band on hold, Delta blues and gospel music, and the hopelessness of the world right now.

Treble: So this is a weird time to be releasing an album…

Justin Storms: You’re telling me, man. We were supposed to go on tour in a week and a half, and we had Europe planned, and maybe another August run. So yeah, shit is derailed. At least we have the material, so it’s nice that it’s not all for naught. We were supposed to have a record release show, and a lot of our finances that support the recordings is based on that touring. So that’s just the kind of weird reality on our touring right now. Hopefully we sell enough digitally right now, and luckily we all have jobs, so hopefully we don’t get fired from our jobs. There are just all these weird unknowns and strange realities we’re all faced with. And there are people who are facing something much worse, because of COVID, so we’re actually doing pretty good.

Treble: How frustrating has it been to not be playing music?

JS: That sucks. That’s such a crucial fucking thing for us. We thrive on live shows, practicing, we were starting to get new shows together, but now we’re back to square one in a way. Our lead guitarist has started to demo some stuff, but we’re just going back to square one now. And we’re out of practice right now. I have an autoimmune problem, so I suppose we all have our reasons for not doing it. We could have a Zoom practice, but that feels so unnatural right now.

Treble: The statement you released with Rattle said that a lot of the songs were written while “feeling hopeless” and that it felt like the world was “broken.” And well, things have progressed a bit since then.

JS: I was always fearful of that reality happening, like we were on the brink of another Great Depression, or another war. But that was always maybe a slight paranoia, just with all the rhetoric going around. But even before this was happening, the system was broken, cops were killing Black and brown people and oppressing people, and before that the health care system was broken. It’s amplified. All these things have been amplified, a chickens-have-come-home-to-roost kind of thing. It’s even more grim and… dystopian is the best way to describe it. It’s not pessimism, because I feel like we can do better, but this is what we’re doing.

Treble: We’re maybe more acutely aware of how destructive we are.

JS: We’re excessive people. It’s kind of the nature of the beast when you have all these people using all the resources for various reasons. Everything keeps on amplifying and getting worse, and it’s our fault and driven by our wants and needs. There are all sorts of factors—the American dream.

Treble: Was your hope to create something cathartic with your music, perhaps in spite of that feeling of dystopia?

JS: Art and music, you know, have been my religion and outlet and my way of just getting that shit out, and facing ugliness, beauty, tragedy, love lost, love gained, death in families, suicide, depression—all those themes run rampant, just depends on the song. It’s like a nice hike in the woods, like a bath, seeing a cathedral. A lot of it is this weird hypnotic state I go into when I write music. Some of it is literal and based in some reality or folklore. Some could be just a trance, and that’s what I come up with.

Treble: You’ve said that Alan Lomax’s field recordings was an influence on writing “Grass.” How much have gospel and blues played a role in shaping your music?

JS: I think I’ve always had a romanticism about field songs or work songs, or even a cappella religious songs. If you listen to those, there’s something otherworldly to them, some kind of magic to that that’s hard to replicate. I guess it’s the human element, the soul. There’s just a, I don’t know, flesh and bone. The marrow. You hear every gritty little sinew. And I don’t know, something draws me to that. I’m fourth-generation Texan, my uncles and aunts and grandparents are all farmers or ranchers. But that’s my family’s background, grandfather got gored to death by a bull—some pretty harsh living conditions, but that’s what they loved to do. And there was a lot of storytelling and weird things that took place back when they were growing up. That type of music, that life, is something I know but also romanticized about it. I never had to birth a calf. It’s just weird little things that you don’t experience in modern life. Growing up in the church, I have a hate/love relationship with organized religion, I mean I hate organized religion, but there’s something magical about it. I’m not going to handle snakes or speak in tongues, but I can feel that energy. I see how people can be in a trance about god. But I mean, shit man, gospel music? That’ s pure rock ‘n’ roll.

Treble: And some of those early gospel or Delta recordings are just spooky as hell.

JS: “Dark as the Night” by Blind Willie Johnson? Fuck, that’s one of the most haunting songs out there. And to think he died in a burned-down house because he was blind and poor. There’s such a weird mythology about him, but it’s so sad. But it just sounds like total loneliness. He’s singing about god, but there’s this weird eerie thing, you’re kind of at peace, like you’re out in space hearing him.

I guess that’s kind of what I’m doing. It’s the blues, but it comes out differently. At the root, it’s blues. Can’t deny it.