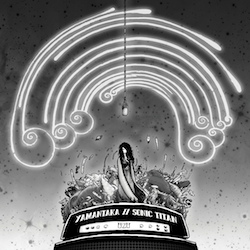 Yamantaka // Sonic Titan’s music is not the type that can be processed properly in one sitting. The face-painted Canadian prog-rock outfit certainly leaves a strong impression — either through their theatrical live performances or through their powerful, ambitious songs, which explode with the stadium-filling bombast of ‘70s art rock. Their debut album, YT//ST, created a mesmerizing swirl of Zeppelin, Yes, Genesis and The Boredoms, and that art-rock vortex just keeps on swirling deeper on follow-up Uzu. But there’s a lot to process here. Singer Ruby Kato Atwood described the central premise of Uzu in a recent interview: “all of our work exists in this universe with different planets, but the characters travel between those worlds. For this record, we were traversing the interior worlds of the characters.”

Indeed, Uzu is a conceptually driven record that follows a central character, namely Chinese goddess of the sea Mazu, whose image is depicted on the album’s cover art, beneath a dangling microphone and atop an amplifier. When she was a little girl, her father and brother both drowned in the ocean, and afterward, at age 28, she descended to heaven, leaving the earth behind. As such, throughout Uzu, imagery of the sea abounds, from the sounds of crashing waves that reoccur in various songs, to titles like “Seasickness” and “Whalesong.” The ocean is a majestic and terrifying thing, and Uzu reflects both extremes simultaneously through its music and its thematic conceits. There are moments of haunting majesty (“Atalanta”), serene beauty (“Seasickness pt. 1”), and those that ignite with momentum and heaviness (“Whalesong”), all of which flow seamlessly into each other as part of an ongoing cycle.

Taking all this into consideration, it’s easy to see Uzu from a distance as a work of high intellectualism — easy to appreciate but difficult to enjoy on an artistic level. But Yamantaka // Sonic Titan easily remedy such notions through their knack for melodic, dynamic songwriting, the likes of which never grow as overwhelming as anything on The Lamb Lies Down on Broadway, nor as broadly expansive as the three tracks on Close to the Edge. It’s maybe not entirely accurate to call Uzu a pop album, but if it’s a rock opera, it’s still more rock than opera.

Dark, gothic piano opens first track “Atalanta,” a gorgeous but chilling introduction to an album that proves to be as much of a thrilling journey as it is an intricately crafted art piece. Once it bleeds into “Whalesong,” the group transitions into a dark and heavy psychedelic rock sound, as Atwood narrates the story behind Mazu’s tragic childhood, coming to a mesmerizing climax as she sings, “They rise/ Into battle with the tide.” An eerie synth pattern forms the basis of standout “Windflower,” a tense, but atypically gorgeous rock song that pulses and vibrates against dramatic, if subtle chord changes. There are heavy grooves and lots of phaser effects in the badass “One,” and on closing track “Saturn’s Return,” a cycle back to the eerie piano sounds that began the album.

Though Uzu is a complex creation, both musically and conceptually, it’s neither necessary to understand music theory nor the mythology behind the album to actually enjoy it. For while it contains a lot to unpack and decode, its melodies are gorgeous, and its power is palpable. As the band said about their music recently, “It’s not necessarily about the depth of it. We have a personal relationship with it and we participate with that depth, but at the end of the day it’s pretty goofy.” Having fun with prog-rock isn’t always easy — with Yamantaka // Sonic Titan, it’s a necessary part of the experience.