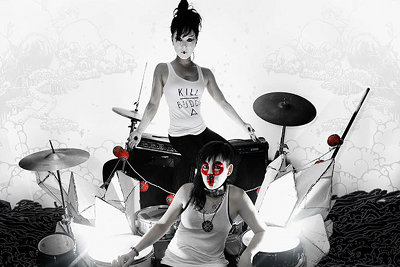 Periodically, we at Treble take inventory of some of the best albums to come out in recent months that we, unfortunately, haven’t covered and just as likely you, the reader, have not heard. As we bear down into the last few months of the year, it seemed like a ripe opportunity to summarize the past 12 months with some of their strongest albums to slide under some form of radar. This batch of overlooked records contains a lot of variety: industrial metal, cowboy electro, UK bass, “noh-wave,” punk, more punk, hip-hop and epic ambient. Something for everyone!

As usual, it has to be said — if you don’t have these records, then that’s just perverse.

Author & Punisher’s second full-length, following 2010’s Drone Machines, puts Tristan Shone’s metallic contraptions to use by conjuring up the slow, gut-churning industrial metal sound pioneered by Justin Broadrick’s Godfelsh, albeit adjusted with some modern and atypical advancements. Shone’s hands of doom conjure up some pretty righteous noise, though he’s able to cover a lot of ground within a pretty noisy space.

Daughn Gibson kicks up a dark yet nonetheless very cool atmosphere via loops, samples and overdubs, but his most compelling instrument is his own voice, a deep and masculine baritone that would put him in friendly company among classic ’70s outlaw country crooners, if it weren’t occasionally slowed down and treated with various effects.

Right off the bat, looking at the list of producers Joey raps over on 1999, the young Bada$$ has hand-picked beats by some pretty remarkable names: MF DOOM, Lord Finesse, Statik Selektah and J Dilla, to name a few. These organic, crackly sample beds create a satisfying throwback to the `90s for the emcee, part of a Brooklyn-based collective called Progressive Era, to spit his game. And he’s most definitely got some game.

Somewhat similar to the raucous post-punk crafted by their fellow Danish countrymen in Iceage, Lower turn abrasion into a popular art form. There are discernible hooks and melodies in the fiery muck they sling, and for that matter, four spectacular songs. But what truly sells this 7-inch EP is the sheer power the band harnesses.

Four such musical giants comprise Rachel Evans’ self-titled Motion Sickness of Time Travel album, each one spanning 20 minutes or longer, and each one containing a unique character unto itself. The common thread tying all of these pieces together is their slow yet seemingly limitless progression, unfolding from one aesthetic and blossoming into something different entirely.

For as big of a splash as she’s made on tracks bearing the credits of others, Jessie Ware’s best material, it turns out, was yet to come. The strength of her performance on SBTRKT’s “Nervous” alone landed Ware a solo label deal, a big step forward certainly, yet one that opened wide the possibilities of her artistry. Once a diva that ran in the best of dubstep circles, Ware has come into her own as a stunning and singular artist with Devotion, one of the strongest electronic pop albums to emerge this year.

There’s a lot going on in Sorry‘s ten tracks — anger, blazing guitar riffs, furious rhythms, feminism, confrontation, hooks galore — and the band consumes only 19 minutes to pack it all in. White Lung’s is a ruthless efficiency, to borrow a phrase from Monty Python’s Flying Circus, though that’s not a quality to be confused with being overly sparse or unfinished. Sorry is astonishing in just how complete it feels, which is aided in part by a force of energy that remains an exhausting constant.

In the most basic sense, Yamantaka // Sonic Titan play prog rock, which lends itself well to the kind of theater in which the band indulges (see: Genesis; Floyd, Pink). The group’s latest album, YT//ST isn’t nearly as sprawling as some of the 1970s’ most ambitious progsters however, wrapping up its psychedelic rock opera in just 31 minutes. But those 31 minutes contain some pretty spectacular ideas.