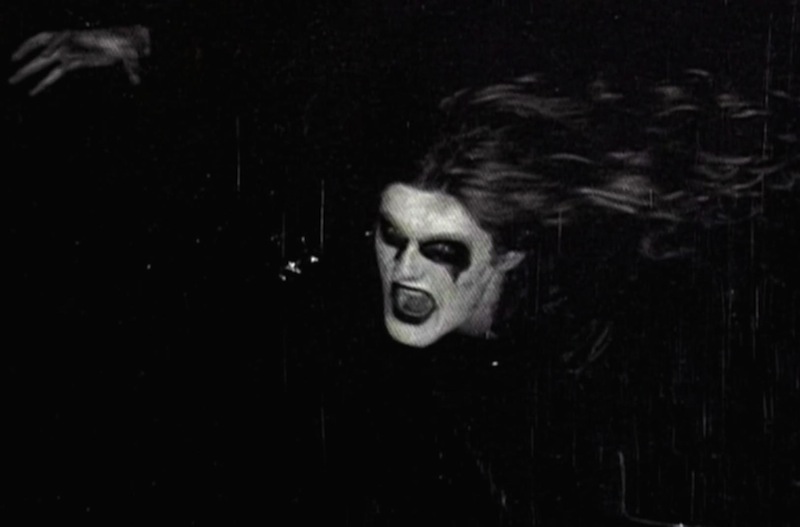 A lot of people are planning on dressing like Psy or binders full of women for Halloween, but we’re taking a little bit different tack and slathering on the corpse paint. Black metal is fine listening year round, of course, but it seems particularly apt on the most sinister of holidays. And with the 30th anniversary of the album that coined the term, Venom’s Black Metal, arriving in November, it seems extra appropriate to stack our favorite black metal albums on the sacrificial altar. With tens of thousands of albums out there and countless sub-sects of niche performers, black metal doesn’t provide a lot of easy entry points, and the sensationalized stories of church burnings and unfortunate handful of actual murders don’t help. But it’s not all violence, just fiery, extreme sounds. Oh, and the occasional visit from demons or what have you. Here are what we think are the 10 best black metal albums; Happy Halloween!

Black metal’s evolution began sometime in the early ’80s with Venom coining the term, Hellhammer and Mercyful Fate lending dark occult themes to the cause, and finally Bathory’s Quorthon devising the unmistakable blast-beat driven sound that now largely defines the genre. Having released two essential pieces of the black metal canon just a year apart — 1987’s Under the Sign of the Black Mark and 1988’s Blood Fire Death — to choose just one comes down to a matter of taste between shorter, thrash-metal driven bursts or an epic Viking saga, and I’m inclined to go for the latter merely for how massive it is. Packed with Viking lore and expansive tracks both majestic and pummeling, Blood Fire Death isn’t an easy first listen, but it’s a rewarding one, and an important step on a strange and twisting journey.

Darkthrone – A Blaze In The Northern Sky
(1992; Peaceville)

Partially because key figure Fenriz is an outspoken advocate for metal (and champion of metal bands the world over) and partially because they never tour, Darkthrone is one of the more prolific black metal bands to emerge from the Norwegian scene. And for at least part of their career, Darkthrone was also emblematic of the lo-fi production values that made black metal such a strange and mystifying artifact. In fact, there are a number of parallels to be made between punk rock and black metal, though the politics can vary quite a bit. On A Blaze In the Northern Sky, however, Fenriz and Nocturno Culto find that sweet spot where accessible thrash metal and dark, harrowing black metal converge. There are riffs galore, relentless rhythmic storms and croaking vocals that are sometimes menacing, sometimes goofy. All the same, it’s black metal done the old fashioned way, and done well at that.

Mayhem’s De Mysteriis Dom Sathanas is the sort of album that’s forever accompanied by an asterisk. Its release will forever be haunted by the death of songwriter and guitarist Euronymous, who had just shortly before its release been murdered by Varg Vikerenes, who happened to provide the bass tracks on the album. So, yeah, it’s a little ghoulish behind the scenes. But it also rips. Euronymous, for his part, crafted a black metal album that’s all dense, thrashing guitars and manic energy, while vocalist Atilla Csihar (who has since collaborated with the likes of Sunn0))), Jarboe and Anaal Nathrakh) lends an idiosyncratic moan to the proceedings. The circumstances surrounding the album were certainly grim, and even for how influential Vikernes is on the genre for his work as Burzum, he will never not be the guy who murdered Euronymous (not to mention a hate mongering racist), but De Mysteriis Dom Sathanas is nonetheless a key recording in black metal’s evolution.

Ulver is easily the weirdest group to have been born of the Norwegian black metal scene of the early ’90s, mostly because black metal was only a passing phase for the group. After 1997’s Nattens Madrigal, the band went off into a number of odd directions, from folk to electronic, and from prog rock to industrial. It’s not as if there was a shortage of black metal bands by the early ’00s anyhow, but in the short window that Ulver was a metal band, they were playing it in a way hardly anyone else was. Bergtatt, a five-part concept album about trolls or goblins or something, goes back and forth between menacing black metal surges and a sublime blend of metal and almost monastic chants. It shouldn’t work, but does so magnificently, and stands as one of the most unusual, yet most rewarding black metal albums of all time.

Emperor – Anthems to the Welkin at Dusk
(1997; Century Black)

Emperor carved out a pretty impressive niche for themselves with debut album In the Nightside Eclipse, a more symphonic and sophisticated, yet still plenty harsh style of black metal. And on Anthems to the Welkin at Dusk, they refined it even further, concocting a crisper, tighter, yet even richer sound experience, which finds their chilling black metal onslaught firmly intact, but allowing for a wider range and even more diversity. A handful of moments are even startlingly elegant to the point of approaching post-rock (though bands like Agalloch would take that much further later on). It’s extreme in every possible direction.

Norway’s Immortal is likely more guilty than most black metal legends of engaging in the absurd corpse paint and spiked-wristband theatrics. But then again, they’ve also managed to avoid the sorts of controversy that characterized the early ’90s Norwegian scene, and gradually pushed toward a more sophisticated, progressive sound over time. At the Heart of Winter is miles apart from the simpler, raw blasts of 1993’s Pure Holocaust, revealing cleaner production values, longer, more dynamic songs, and melodies that stand as some of the strongest in black metal. The title track, in particular, is a jaw dropper, opening with some stunning gothic sounds before erupting into an arena-sized metal stomp. It’s not a complete abdication of absurdity, but at this stage in their career, Immortal were more successfully taking on something bigger and, unexpectedly, more commercial.

Bay Area band Weakling made a fairly hilarious point about the ridiculousness of “kvlt” attitudes when stories circulated stating their debut album would never actually be officially released, but given to one fan in Europe to be buried in strategic locations to be literally unearthed. That never happened (that we know of), but the band’s sole album, the immense Dead As Dreams, is as amazing a metal debut as one is likely to come across. Spanning nearly 80 minutes, its dense cacophony is simultaneously graceful and brutal, while vocalist John Gossard didn’t let out a black metal hiss so much as an anguished moan. The band had already broken up by the time the album was released, various members going off into other acts ranging from instrumental math shredders The Fucking Champs to epic doomsayers Asunder. But if nothing else, they released this one huge album, and it’s a thing of agonizing beauty.

For the sake of including “important” records, I briefly considered Vikingligr Veldi as the Enslaved album of choice here, but instead opted for what’s arguably their best album (Below the Lights and Ruun could also be accepted but whatever). Where the band started out blending harsh, lo-fi black metal akin to their Norwegian contemporaries and blending it with eerie prog rock, their commitment to pursuing progressive sounds grew into a more compelling trajectory around a decade later. The Enslaved of Isa is, musically, continents apart from where the band began if not worlds, but certainly in the same galaxy. It’s identifiably black metal, but vastly more sophisticated and melodic. It’s a much more grown up version of black metal, embracing psychedelia and intricate musicianship, but never abandoning what makes it metal.

Think Viking metal is pretty fearsome? Then imagine how eerie and powerful Transylvanian black metal can be! Negură Bunget takes a similar conceit of that espoused by the likes of Bathory and Enslaved, their songs focused on folktales and heritage from their native Romania, but with a unique sound that’s even more gothic and atmospheric than many of their Scandinavian counterparts. OM is a pretty massive record, but a pretty good portion of it consists of atmospheric instrumentals, and the band often blends avant-garde folk sounds with harsh black metal surges, as in the creepy, yet transcendent “Inarborat.” I can’t verify that any of their songs are actually about vampires, but it’s within the realm of possibility.

If there are still metal fans out there who think Wolves in the Throne Room is “hipster metal,” then I’m afraid I’m not going to be changing their minds here, but it’s a specious argument to begin with. Shrinking audiences don’t make for much of a career, and Wolves in the Throne Room’s ability to soak in more atmospheric sounds, from ambient to shoegazer, is part of what makes them interesting. The Pacific Northwestern group, formed by brothers Nathan and Aaron Weaver, incorporates a mystical quality to their sound, and does so with a dedication to haunting, dense sounds. Frankly, Two Hunters is one of the prettiest black metal albums you’ll find, outdone only by Celestial Lineage, which followed four years later. Perhaps the fact that the Weaver brothers live on a farm and live sustainable eco-friendly lifestyles is off-putting to anyone who likes their metal with a bit more pig’s blood, but contrary to popular belief, black metal can be a big tent too.