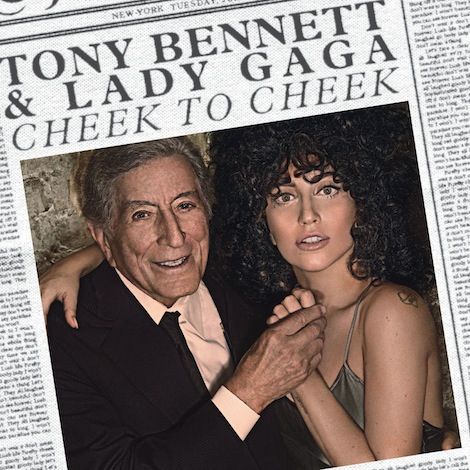 There were two things I knew going into the new collaborative album of jazz standards by Tony Bennett and Lady Gaga. (A) I saw Tony Bennett in concert two years ago at Key Arena in Seattle, reflected upon the fact that he was 86 years old, and still had the lung capacity of an Olympic swimmer. He hit notes and effused charm that made me question several of my life choices in the areas of potables and athletics, obviously making my looming midlife crisis look like a Mel Brooks slapstick. And (B) I’m intrigued and usually charmed by Lady Gaga whether her albums are strong (Born This Way) or admirably misguided (ARTPOP) for the simple reason that beneath the bubble suits, tenderloin dresses, anime narratives and style panoplies, there was a person like me who took high school jazz band and drama courses and got their asses psychically kicked from time to time because of it. She’s part of my maligned, wedgied tribe, and you better believe I protect that shield.

So the pairing made more sense to me than it might have to others, and I was fairly confident Cheek To Cheek wasn’t going to be a disaster, and it’s not. Bennett doesn’t align himself with substandard artistes, and Gaga’s raw goods have always been there – it was just a matter of catching her in an unguarded moment. There are just enough of those on Cheek To Cheek to make it worthwhile, although there could have been more. (And apparently there might be, as they’re looking into recording another project covering Cole Porter’s “Red, Hot & Blue” song cycle.)

Gaga’s a really good singer. She’s been working in a mildly subversive capacity in a genre where that kind of talent isn’t entirely necessary, but she thrives without AutoTune. She has some chemistry with Bennett, and there are moments where it’s clear how much they enjoy egging each other on. They bring out the charm on Cole Porter’s “Anything Goes,” and excel on an easygoing Hammond-driven arrangement of McHugh & Fields’ “I Can’t Give You Anything But Love.” Cy Coleman’s relative obscurity “Firefly” gives them both a chance to tackle complicated descending vocal lines in a frantic bridge and both of them keep up, but Gaga’s unnecessary spoken interjections interrupt the flow of Johnny Mercer’s “Goody Goody” (on the deluxe edition).

In fact the only real glaring issue comes from Gaga’s studiousness in getting it right. With one big exception, she over-relies on her brassy chops and assertiveness to over-deliver on some material without imbuing it with the subtlety and nuances Bennett has down pat. She has the technique down, and there’s nothing grotesquely wrong with her parts in “Anything Goes,” “Nature Boy” and “Ev’ry Time We Say Goodbye,” but  there’s just this indefinable sense that she’s backing off sounding too vulnerable.

That’s something that develops over time, though, and that big exception I mentioned is Billy Strayhorn’s “Lush Life,” which is significant as being one of the least cakewalk-able tunes you could do. The Great American Songbook has few songs this difficult, with drifting key signatures, a melody that’s hard to capture and one of the darkest, most complex lyrics of its time. And Gaga nails it, earning her belt moment at the end, but playing the dissolve with sensitivity and grace towards its tragic and ambiguous ending. “Lush Life” is the ultimate high-risk, high-reward standard: if you screw it up it’ll haunt you like dysentery, but if you don’t you’ve justified everything about your decision to go into music. Gaga does not screw it up. At all.

The jazz combo arrangements are serviceable to both Bennett’s standard and Gaga’s debutante entry, with a few variations and unexpected moments. For all its ready accessibility and unassailable material, nobody’s phoning this thing in. Bennett continues his unparalleled march through the love of several generations, Gaga proves respectable and potentially capable of something greater in the future, and if this isn’t your bag, at least you now have a guilt-free Christmas gift for your aunt. Cheek To Cheek isn’t novel, but it’s no novelty either, and while it doesn’t redefine the classics it makes a strong case for their respect. Once I get out of this locker the football team stuffed me into maybe I’ll play it again, and then I’ll make you all pay.