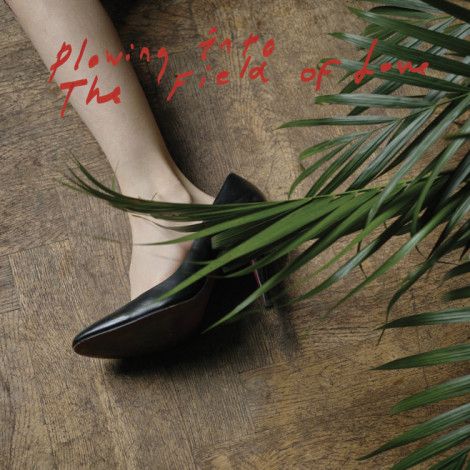 Copenhagen post-punks Iceage never really seemed like the type to court controversy so openly, but they’ve also never pushed it away. Since the release of their 2011 debut New Brigade, accusations of being fascists have trailed them — based on fairly thin, circumstantial pieces of evidence involving a tattoo of the neo-folk band Death in June‘s logo, and some fist-pumping buzzcut fans at their incendiary live shows. It takes a lot more than a needle full of pigment and enthusiastic hardcore kids to send people to leap to Satanic-panic level conclusions. It takes the menace and intensity that comes not only from tapping into darkness and nihilism, but making them more tangible through relentlessly venomous punk songwriting. Nowhere is that tension more exciting and unsettling than on their 2013 album You’re Nothing. Yet, with the release of “The Lord’s Favorite,” the first single from Iceage’s Plowing Into the Field of Love, the band encountered an entirely new and unexpected controversy: They had kind of, sort of gone country.

“The Lord’s Favorite” proved polarizing, though at this point that’s not entirely out of the ordinary. The Guardian‘s David Stubbs tore down the band’s altar of twang in a single sentence: “The concept of Danish country-punk could have been interesting, but perhaps out of a misguided desire for earthiness and substance, Iceage have merely trundled down a well-trodden road to nowhere.” It’s easy to understand the level of knee jerking at play, though it’s only a short leap from Joy Division and Wire to The Gun Club and The Mekons. It would be much easier to jump on the naysayer bandwagon if Iceage hadn’t pulled it off so well, Elias Bender Rønnenfelt’s smirking look at privilege and arrogance (“I think it’s evident that I’m god’s favorite one/ And now is the time I should have whatever I desire“) suggesting that, once and for all, Iceage might actually have a sense of humor. Iceage are growing up, and on Plowing Into the Field of Love, that means doing a lot more than what’s expected of them.

Iceage haven’t, in fact, gone country, though “The Lord’s Favorite” is only an outlier purely in terms of the strictest boundaries of genre. The band is more invested in exploration into a greater diversity of styles, shades and techniques. If the first two albums were about potency and refinement, respectively, Plowing Into the Field of Love is about expansion. Laudatory as their efforts are to step outside their comfort zone, however, these Danish princes of darkness actually sound perfectly comfortable slowing down, spreading out and brooding, rather than merely charging or walloping. Leadoff track “On My Fingers” sets a new record for song lengths for the band, at 5:15, but its tense, gothic drama immediately recalls the harrowing mood of Nick Cave and the Bad Seeds’ “The Mercy Seat.” It’s eerie and it’s loud, of course, but romantic and beautiful in a horrifically wonderful way.

Remarkably, however, at no point does Plowing Into the Field of Love sound like anything other than the logical fulfillment of the promise on Iceage’s first two records — it just arrived a little ahead of schedule. Sonically, they cover a lot of ground, be it the Tom Waits-style hurdy-gurdy wheeze on “Against the Moon,” or the Bad Seeds punk-blues swagger of “Stay.” But here, Iceage aren’t just playing around with style, they’re committing to them fully, chasing a torrent of dizzying riffs into a series of elegant piano plunks on “How Many,” jaunty Pogues-style strum ‘n’ gallop on “Abundant Living,” or a triumphant burst of brass in the climactic final minute of “Forever,” erupting in the aftermath of Rønnenfelt’s conclusion that his dark side might very well swallow him whole: “If I could dive into the other, I would lose myself forever.”

On Plowing Into the Field of Love, each new element added feels like a necessary part of an intricate whole, and not just window dressing. This — more than the added nuance, varied instrumentation or newly embraced sartorialism — is a sign of the sophistication that Iceage has grown into. They’ve shown their work, and it’s a beautifully complex piece of machinery they’ve built with it.

The Gun Club – Fire of Love