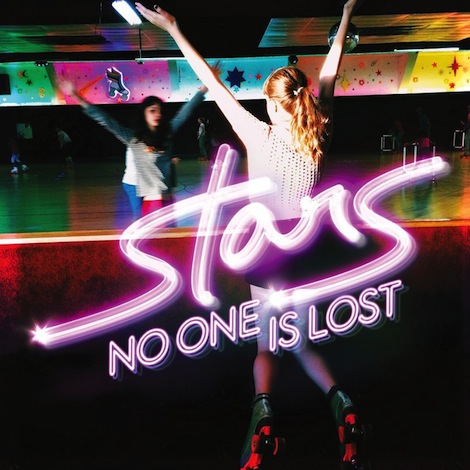 On Oct. 14, Toronto indie pop outfit Stars will release their seventh album No One Is Lost — their follow-up to 2010’s The North — via ATO Records. The already-released title track provided some insight as to where the band was going on this record, namely into some flashy and accessible electro-pop realms that, while familiar to Stars, never sounded quite so huge. It’s hard to imagine that the band could have gotten much bigger than 2005’s Set Yourself on Fire or 2007’s In Our Bedroom After the War, but here we are. And, as usual, there are some big ideas behind it. Torquil Campbell says of the album, “This record’s called No One Is Lost because that is a fucking lie. We are all lost, we are all going to lose this game and, as you get older, you lose people more and more. I just wanted to close my eyes and jump and hope that was true. Life is loss, love is loss. And loving people is about accepting that you’re going to have to say goodbye to them.”

Intrigued? Of course you are. And thanks to NPR First Listen, you don’t have to wait any longer to hear the band’s new album. Listen to the Stars No One Is Lost stream here.